US polarizes world with attack on Syrian regime

From Russia to Israel, the US missile strikes on a Syrian airbase have divided the international community. But the fallout is likely to spill over Syria's borders as alliances supporting and opposing Assad consolidate. 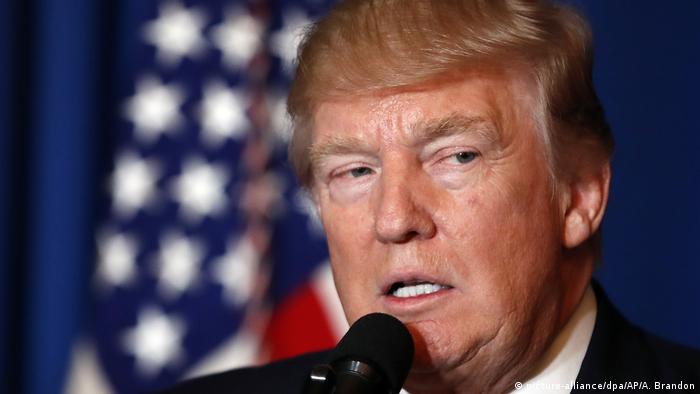 Reactions poured in from across the globe both defending and defying the US' unilateral missile strikes on a Syrian airbase, effectively solidifying those supporting and opposing President Bashar al-Assad's regime.

Washington's allies came out behind the attack on the airbase, which was allegedly used by Syrian regime warplanes to launch a suspected chemical attack earlier in the week. But the action has further entrenched opposing positions in the conflict.

Other NATO allies, including the UK, Turkey and Italy, said they viewed the development positively. Throughout Syria's civil war, the West has consistently called for a political solution to the conflict that would require Assad to relinquish power. The US missile strikes on a Syrian military facility effectively corner the White House into supporting that position, one that Trump has attempted to sideline since assuming office.

On the other side, Russia and Iran have insisted that Assad's position in government is not negotiable. Moscow, which has politically and militarily supported Assad's regime, said the missile strikes further strain relations between Russia and the US, and effectively hamper the international fight against terrorism.

"President Putin considers the US strikes against Syrian an aggression against a sovereign country violating the norms of international law, and under trumped-up pretext at that," said presidential spokesman Dmitry Peskov in comments circulated by state-owned TASS news agency.

Despite Trump's ambitions to reset US-Russia relations, his order to launch missiles against a Syrian military target creates more obstacles to any kind of rapprochement. But beyond attempts to thaw relations, the unilateral action consolidated support across opposing alliances.

Israeli Prime Minister Benjamin Netanyahu said he "fully supports" Trump's decision, adding that it sent a "strong and clear message" that "the use and spread of chemical weapons will not be tolerated." But Israel, the US' premier ally in the region, has much to gain if Washington increases its military role in Syria and continues to target government forces.

The Israeli government has warned that Hezbollah, a Shiite militia operating out of Lebanon, could acquire weapons from Syria and use them to attack the country. The militant group has fought alongside regime troops and Iranian paramilitary groups.

Israel, along with other members of the international community, have labeled Hezbollah a terrorist group backed by Iran, which the Israeli government claims is the biggest threat to its existence.

But Israel isn't the only one that stands to profit. The US' strategic ally Saudi Arabia described Trump's order to launch the missile strikes against the airbase as a "courageous action."

Riyadh, which supports the Syrian opposition and opposes Iran's influence in the region, also profits from Washington's military action by consolidating support for its interests in the conflict-torn country and opposition to Assad's regime.

In February, the US president vowed to create "safe zones" in Syria which would offer areas of protection for Syrians fleeing war. While some NATO nations, such as Turkey, have backed the idea, others have voiced skepticism, including Chancellor Merkel.

Trump's order for military action against a Syrian government facility paves the way for an increased role for US military assets operating in and around Syria. Whether that translates into more strikes against Syrian regime forces and military facilities or a push towards a political solution remains to be seen.

"I don't think there's a risk now that this will lead to further war but the big question is how will it affect the all-important way of solving or settling by a ceasefire, the negotiations in Geneva," Hans Blix, who lead a UN mission to monitor WMDs in Iraq and famously rebutted former US President George W. Bush, told DW.

What can be gathered from Washington's latest military action is that various factions of the international community have consolidated their support and opposition to Assad's regime.

But the dangers of exacerbating tensions in the Middle East with unilateral military action, and the potential spillover effect, whether irregular migration or violent escalation, will likely extend beyond Syria's borders.

Trump's full remarks on US strikes in Syria

The prize-winning author's agent has confirmed that the writer is now 'talking and joking' and off a ventilator after being stabbed at a literary event on Friday. German Chancellor Olaf Scholz and other world leaders have condemned the attack.