Trump team shifts focus away from Assad in Syrian war | Middle East| News and analysis of events in the Arab world | DW | 01.04.2017

Trump team shifts focus away from Assad in Syrian war

The US aims to deploy more American troops and set up safe zones in a new approach to Syria, experts told DW. But while the US focuses on jihadists, the fate of Bashar al-Assad might still prove crucial for peace. 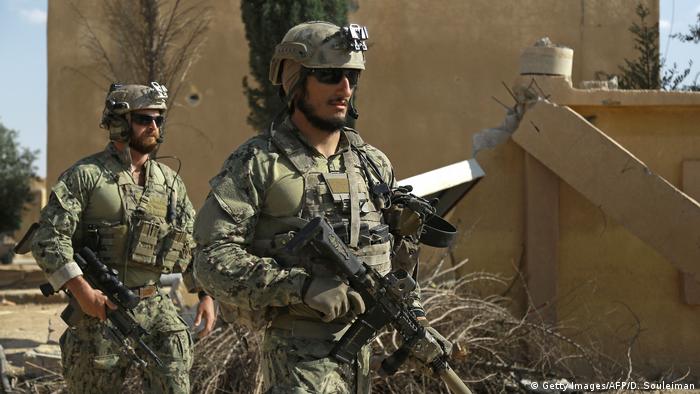 The White House spokesman has dismissed concerns over Congressional hearings on Russian influence. Instead he blamed former Secretary Clinton for making concessions to Moscow, and hinted at a new Syria policy. (31.03.2017)

The US president-elect's view of the Syrian conflict has remained one of his few consistent positions. But Donald Trump has said that if he did attack the Syrian regime, "it would be by surprise." (16.11.2016)

Washington signaled a new strategy on Syria and Assad on Friday, with White House spokesman Sean Spicer hinting at accepting "reality" in the war-torn country. The US would focus on beating back the "Islamic State" (IS) terror militia and not on ousting Assad, Spicer told reporters. Other US officials also publicly backed away from what was a long-held position of the Obama administration.

Details on the new approach remain scarce. However, in March, the US had quietly deployed hundreds of marines to Syrian soil to aid the anti-IS offensive, suggesting that the new White House leadership is willing to commit more ground troops to the years-long civil war.

"The top priority of the Trump administration for Syria is the military defeat of [the 'Islamic State']," State Department veteran and one of the top US experts on Syria, Fred Hof, told DW. Hof, who worked as a special adviser to ex-Secretary of State Hillary Clinton, claims that this goal was shared by the previous administration.

"The only difference is that President Trump wants to accelerate the process," Hof added. "To this end he is putting more American 'boots on the ground' and giving more operational latitude to US commanders."

Unlike in previous years, however, the Pentagon no longer publicly announces deployment of ground troops in Syria. The US army is aiming to "maintain tactical surprise" by withholding information, Pentagon spokesman Eric Pahon told the "LA Times."

Another key difference seems to be President Trump's pledge to set up safe zones for refugees in Syria, after ex-President Barack Obama rejected the idea. With this approach, the US-led coalition would firstly push the IS militia out of parts of Syria, and later set up and control safe zones in the same area. In addition to the humanitarian impact, the US could use the territory as key leverage in the talks with Assad.

Ultimately, the US could end up controlling over two-fifths of Syrian territory, says an analyst with the Center for a New American Security, Nicholas Heras.

"The Trump administration is amassing real estate in Syria that is valuable, and it is through control over that land that it can bargain with the Russians to get Assad to back off from attacking stability zones that would be established inside of Syria," Heras told DW. 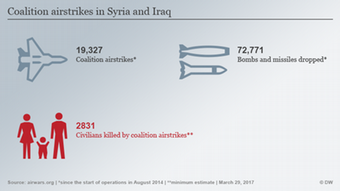 The US is leading coalition airstrikes against IS

"In comparison, for the Trump team any type of fantasy of overthrowing Assad in the foreseeable future is a distracting nuisance that is just not worth entertaining," he said.

US allies to enforce safe zones

Placing the refugees in the safe zones would also carry a political benefit for Donald Trump, as a way of keeping them out of the US without the controversial travel bans. From a military standpoint, however, many observers believe such a deployment would be overly costly and would risk dragging the US into another ground war. Last year, the Pentagon estimated that setting up a safe zone in Syria would take 15,000 to 30,000 US troops.

Heras told DW that the idea needed a "healthy dose of skepticism," but added that the US would not have to go at it alone.

"Enforcing a safe zone would require fewer US military forces if American Middle Eastern partner countries like Turkey, Saudi Arabia, the UAE, Jordan, and Egypt, or a powerful Muslim country like Pakistan, would agree to provide forces to help guarantee the security of the zones," he said. However, if US partners are unwilling to commit, "the costly and potentially decades-long responsibility would fall to the US military and the American people," he said.

US and Turkey seek common ground

'North Korea of the Levant'

Even with Washington not focusing on Assad, Syria still needs a new regime to move forward, Hof told DW. According to him, the key challenge is still to get major foreign players to agree on a political transition, including Assad's allies in Moscow and Tehran.

"In Syria, Bashar al-Assad is the poster boy for political illegitimacy. Public protestations notwithstanding, the Russians and Iranians know it: They know their client better than anyone."

Assad has made Syria "safe for many forms of violent extremism other than his own" and left a vacuum for the IS and al Qaeda to fill, Hof claims. Even so, removing him from power would be an uphill battle.

"My sense is that two key parties - Assad and Iran - will hold out firmly against political transition.  Moscow knows it is necessary: Otherwise, Syria becomes the North Korea of the Levant. But Russia may have neither the will nor the leverage to push political transition."

'More power to them'

At the same time, Russian influence might be larger than previously assumed. Moscow has recently managed to negotiate a quite robust truce with Istanbul and revive hopes for a lasting peace. Both countries purposely kept the US out of the loop while US officials focused on the transition of power in Washington.

Turkey, Russia and Iran all agreed to act as "enforcers" of the truce by using their direct influence on the forces on the ground. The initiative came after several failed peace deals between the US and Moscow.

Commenting on the latest diplomatic effort, Hof told DW that the US would be "delighted" if other countries could find the path for legitimacy in Syria. However, "getting there means getting rid of Assad," he stressed.

"If Russia and Turkey can do this without American involvement, more power to them."

COVID cases in Africa were 'underreported'