US President Trump and Russian President Putin have agreed to develop relations "as equals" in their first phone call since Trump took office. The conversation focused on "mutually beneficial trade and economic ties." 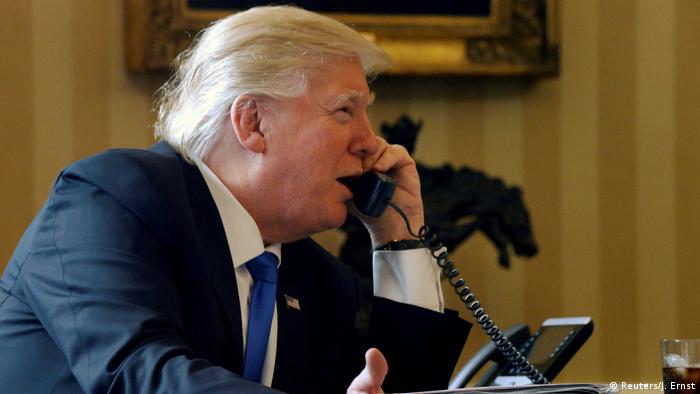 In a telephone discussion, the leaders of Germany and the US discussed conflicts in the Middle East and Ukraine, relations with Russia and the importance of NATO. Trump had spoken earlier with President Putin. (29.01.2017)

In advance of Donald Trump's inauguration as president of the United States, the mood in Russia is somewhere between euphoria and hesitation. Moscow wants a diplomatic restart with Washington, but how will they do it? (13.01.2017)

Describing the phone call as a "positive" exchange, the Kremlin said the two leaders discussed a number of subjects, including the peace efforts between Israelis and Palestinians and the conflict in Ukraine. Other issues reportedly included the Iranian nuclear deal and ongoing tensions on the Korean peninsula.

Russian President Vladimir Putin said in a statement that the two sides had expressed "a willingness to work actively together to stabilize and develop Russian-American cooperation on a constructive basis, as equals, and to mutual benefit," adding that their top priority would be the fight against international terrorism.

The Kremlin further said that US President Donald Trump was hoping to organize a meeting with Putin soon.

To sanction or not to sanction

The US and Russian leaders had spoken for the first time on the phone in November 2016, just after Donald Trump's election victory. At the time, they agreed to "normalize" relations between Moscow and Washington following tensions during the previous US administration of former President Barack Obama over the conflicts in Syria and Ukraine.

Relations between the US and Russia had plunged to their lowest point since the Cold War after Washington, alongside the European Union, imposed economic sanctions on Russia for its 2014 annexation of Ukraine's Crimean peninsula. The subject of those sanctions was not reportedly raised in the most recent conversation between Putin and Trump, according to statements made by Kremlin spokesman Dmitri Peskov to the Interfax news agency.

Trump had said a day earlier that it was "too early" to speak about easing the sanctions.

"We'll see what happens. As far as the sanctions, very early to be talking about that," Trump explained on January 28. The White House has not made any new comments since the phone call between the two leaders occurred.

Two Republican senators - Arizona's John McCain, chairman of the Armed Services Committee, and Ohio's Rob Portman, a member of the Foreign Relations Committee - cautioned the White House about the prospect of easing the sanctions on Moscow, warning that they would work to turn the sanction into law if Trump were to signal a departure from the current policy:

"I hope President Trump will put an end to this speculation and reject such a reckless course," McCain said in a statement.

"If he does not, I will work with my colleagues to codify sanctions against Russia into law."

McCain has criticized Russia recently, saying President Trump should remember that Putin was "a murderer and a thug who seeks to undermine American national security interests at every turn."