In a telephone discussion, the leaders of Germany and the US discussed conflicts in the Middle East and Ukraine, relations with Russia and the importance of NATO. Trump had spoken earlier with President Putin. In a joint press statement issued after the 45-minute telephone conversation between Chancellor Angela Merkel and new US President Donald Trump on Saturday, the two leaders said they had stressed the "fundamental importance" of the NATO alliance to transatlantic ties.

"The leaders recognized that NATO must be capable of confronting 21st century threats and that our common defense requires appropriate investment in military capabilities to ensure all Allies are contributing their fair share to our collective security," according to the statement released by the offices of both leaders. 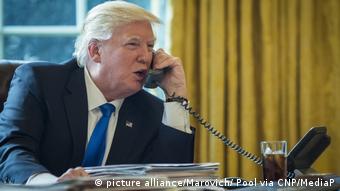 Trump in the Oval Office

Previously, Donald Trump had suggested NATO was obsolete and that pressure would be exerted on members who failed to spend 2 per cent of their GDP on defense. Germany's defense spending is currently 1.19 percent of GDP and although Merkel has said the country would work to increase the level, it would take time.

The Middle East and North Africa, relations with Russia and the Ukraine crisis were also discussed during what was described as an "extensive telephone conversation."

While Trump claimed during his election campaign that Merkel was "ruining" Germany by allowing thousands of asylum seekers to seek safety, there was no mention of refugees in the joint statement. On Friday, Trump banned refugees from several countries from entering the US.

Trump accepted Merkel's invitation to attend the upcoming G20 summit in Hamburg in July. He said that he looked forward to welcoming Merkel to Washington "soon."

The issue of sanctions against Russia was raised by Bavarian state premier Horst Seehofer, leader of the Christian Social Union (CDU), in an interview with the "Bild am Sonntag" newspaper in an interview to be published on Sunday.

Seehofer called for sanctions imposed by Europe and the US after Russia's invasion of Crimea and military actions in Ukraine to be ended.

"I'm arguing for realpolitik not sabre-rattling," Seehofer said. "We have to be clear about different
positions, such as about the annexation of Crimea, while working to promote sensible business ties."

Seehofer called for the sanctions to be lifted this year. Merkel, new foreign minister Sigmar Gabriel and other EU leaders have said they should remain as part of the Minsk peace process.

There was no mention of the sanctions issue in the statement following Merkel and Trump's Saturday conversation.

Ukrainian forces recapture more territory in the northeast and south of the country, in regions that Moscow illegally annexed in referendums. Putin makes more nuclear threats after his losses, but how will the West respond if he plays the nuclear card?