Several would-be passengers have been barred from boarding flights to the United States. A new US immigration ban will even apply to green card holders from seven Muslim-majority nations. 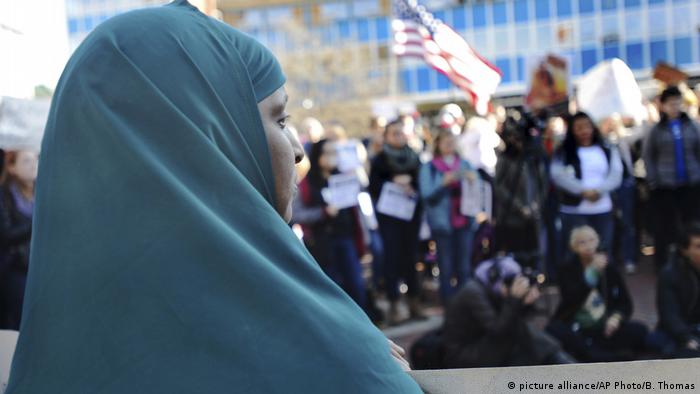 Five Iraqis and a Yemeni national were kept from boarding a flight from Cairo to New York on Saturday, despite all seven people having already obtained the necessary migration visas to enter the United States.

A source at Cairo airport said: "When an official at the JF Kennedy Airport was notified of their status, he issued an order barring them from entering the US."

The passengers were then escorted by a representative of the United Nations Refugee Agency, who reportedly informed them to check with the US embassies that had issued their visas. One of the Iraqis was later released and allowed into the United States, US media reported.

Later on Saturday, Dutch airline KLM said it had kept seven passengers from boarding a US-bound flight. Manel Vrijenhoek, a KLM spokesperson, said: "We would love to bring them there. That's not the problem. It's just that this is what the US sprang on the rest of the world - that these people are no longer welcome." The airline refused to specify which country the passengers were from or where they were flying from.

The countries affected are Iraq, Syria, Iran, Sudan, Libya, Somalia and Yemen. A study from the US Cato Institute found that foreigners from those seven nations have killed zero Americans in terrorist attacks on US soil between 1975 and the end of 2015.

The order suspends admissions to the US from the selected countries for four months and also indefinitely bans arrivals of citizens from war-torn Syria.

The American Civil Liberties Union said on Saturday that it will sue the Trump administration over Friday's order.

With more than a million Iranians living in the US, many are concerned about the implications the visa ban will have on families.

Iran's Foreign Ministry vowed to take reciprocal measures in response to Trump's "insulting" ban on arrivals from Iran, saying it will ban Americans from entering the country until the restrictions are lifted.

While airlines scramble to adjust to life under the visa and refugee bans, Qatar Airways, one of the largest Middle East airlines, was among the first airlines to issue updated travel advice for the United States.

The airline had announced on its website that citizens from the affected countries would still be allowed to travel to the US if they had a permanent residence permit, also known as a Green Card.

However, a spokeswoman for the US Department of Homeland Security said even people holding Green Cards were to be included in Trump's action, despite being granted permanent residency in the United States after undergoing government vetting. A

Nationals with diplomatic visas were exempt from the new restrictions, according to Qatar Airways. These include visas for members of foreign governments, the United Nations, NATO and international organizations.

In a joint statement issued on Saturday, heads from the UN refugee agency and the International Organization for Migration stressed the importance of the US contribution to tackling the global refugee crisis.

"The needs of refugees and migrants worldwide have never been greater, and the US resettlement program is one of the most important in the world," the statement said.

Jan Egeland of the Norwegian Refugee Council responded with a stinging attack, saying that Trump's decision "will not make America safer, it will make America smaller and meaner." He also accused the US president of leading a "race to the bottom" in which politicians in wealthy countries provide "zero moral leadership."

On Saturday, "The New York Times" newspaper reported that two displaced Iraqi refugees who were in the air on their way to the US when Trump's executive order was signed were stopped and detained upon arriving at JF Kennedy Airport in New York.

Lawyers representing the two men have filed a legal challenge to have their clients released. Lawyers told the newspaper one of the detained men had worked on behalf of the US government in Iraq for 10 years, while the other was flying to join his wife, who had worked for a US contractor, and young son.

The attorneys said they have not been allowed to meet their clients, who remain detained indefinitely.

"We've never had an issue once one of our clients was at a port of entry in the United States," Mark Doss, one of the lawyers and a supervising attorney at the International Refugee Assistance Programme, said.

"To see people being detained indefinitely in the country that's supposed to welcome them is a total shock." Doss added. "These are people with valid visas and legitimate refugee claims who have already been determined by the State Department and the Department of Homeland Security to be admissible and to be allowed to enter the U.S. and now are being unlawfully detained.”

The Biden administration will provide $235 million in aid, restoring funds cut by former President Trump. The US move upset the Israeli government.

The US president met American troops stationed in Poland, before being briefed on aid efforts for Ukrainian refugees. Warsaw is hoping for a bigger NATO commitment in the wake of Russia's invasion of its neighbor.