US President Trump's order banning travelers from some majority-Muslim countries from entering the US has taken effect. Politicians, including the German chancellor, and rights groups have voiced concern at the ban. 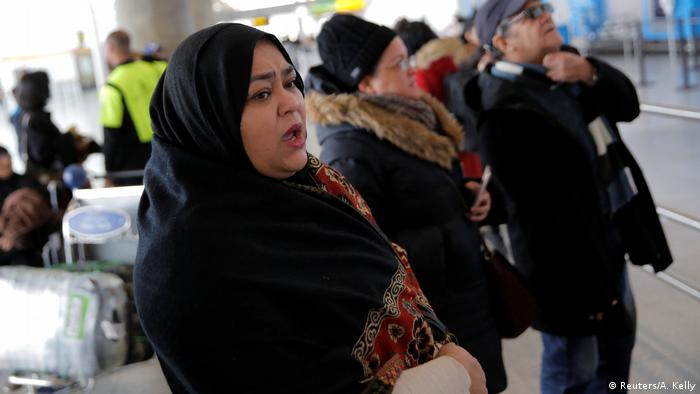 Airlines across the globe are turning back would-be passengers from countries affected by a US immigration ban that bars them from entering the United States.

Leading political and business figures moved quickly to condemn the ban that US President Donald Trump put in place on Friday keeping citizens of Iraq, Syria, Iran, Sudan, Libya, Somalia or Yemen from entering the United States for 90 days. The executive order has also been applied to people with permanent residence permits, known as green cards.

During the same press conference, Ayrault said the policy "can only worry us," and that "welcoming refugees who flee war and oppression is part of our duty."

"She is convinced that even the necessary determined fight against terrorism does not justify placing people of a certain background or a certain faith under general suspicion," government spokesman Steffen Seibert said in Berlin.

He added that Merkel had expressed her concerns to Trump during a telephone call on Saturday and reminded him of the international community's obligation under the Geneva Conventions to take in war refugees on humanitarian grounds.

A joint US-German statement following the call had made no mention of the topic of refugees or travel bans.

Britain 'does not agree'

British Prime Minister Theresa May initally refused to condemn the policy. After being pressed at a joint news conference with Turkish Prime Minister Binali Yildirim in Ankara to give her opinion on Trump's order, May said: "The United States is responsible for the United States' policy on refugees. The United Kingdom is responsible for the United Kingdom's policy on refugees."

But a spokesman for May on Sunday modified this stance, saying the British prime minister was opposed to measures such as those adopted by Trump.

"Immigration policy in the United States is a matter for the government of the United States," he reiterated, this time, however, adding: "But we do not agree with this kind of approach and it is not one we will be taking. If there is any impact on UK nationals, then clearly we will make representations to the US government about that."

Praise from Israel, criticism at home

In the United States, however, Democrats called the measures "un-American." Senate Minority Leader Chuck Schumer tweeted late on Friday, "Tears are running down the cheeks of the Statue of Liberty tonight as a grand tradition of America, welcoming immigrants, that has existed since America was founded has been stomped upon."

In Canada, Prime Minister Justin Trudeau tweeted on Saturday "To those fleeing persecution, terror and war, Canadians will welcome you, regardless of your faith. Diversity is our strength. #WelcomeToCanada"

Iran, one of the nations whose nationals won't be allowed into the USA, vowed to take reciprocal measures by banning Americans from traveling to the country. In a statement carried by state television, Iran's Foreign Ministry called the order an "open affront against the Muslim world and the Iranian nation in particular.

A study from the US Cato Institute found that foreigners from the seven nations affected by the immigration ban have killed zero Americans in terrorist attacks on US soil between 1975 and the end of 2015.