US irritated by German response to spying scandal

US officials have expressed their displeasure a day after Germany expelled the CIA chief in Berlin amid a new spying scandal. Earlier, Germany's foreign minister called for a renewal of ties based "on mutual respect." 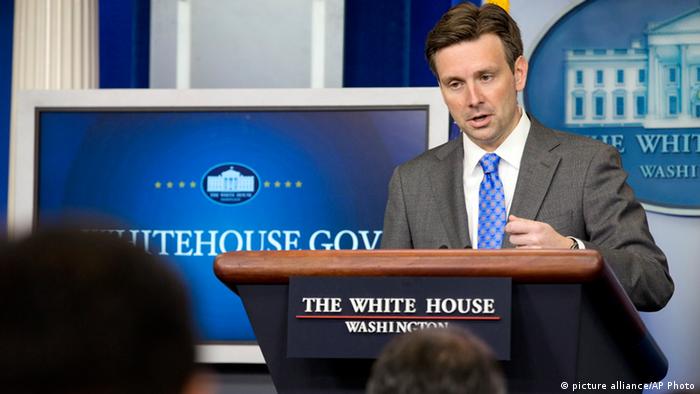 Up until now, there has been precious little official reaction from Washington to the latest allegations of US spying in Germany. However, while he again declined to go into detail about the allegations, White House spokesman Josh Earnest (pictured above) on Friday appeared to indicate that the US was annoyed by Germany's response to the spying row.

"Allies with sophisticated intelligence agencies like the United States and Germany understand with some degree of detail exactly what those intelligence relationships and activities entail," Earnest told a White House briefing on Friday.

"Any differences that we have are most effectively resolved through established private channels, not through the media," he added.

Asked whether his statement should be understood as criticism of Germany's response, Earnest said he would leave this up to reporters to interpret his comments.

Meanwhile, Mike Rogers, chairman of the US House of Representatives intelligence committee accused Germany of throwing a "temper tantrum." Rogers told US news broadcaster CNN that US information had "saved German lives" and that Berlin was avoiding an "adult conversation" on the issue.

This came just hours after German Foreign Minister Frank-Walter Steinmeier offered something of an olive branch to the Washington.

Steinmeier said Germany wanted to renew its friendship with the United States despite the latest spying scandal.

"We want our partnership, our friendship, to be renewed on an honest foundation," Steinmeier told reporters in Berlin. He also said that the relationship should be build not just on mutual trust but also respect. "We are ready for that in any case."

Steinmeier said this was the message that he would take to US Secretary of State John Kerry, when the two meet at the latest round of talks on Iran's nuclear program in Vienna this weekend.

His comments were seen as an effort to help smooth things over with Washington, a day after Berlin asked the CIA station chief in Germany to leave the country after two separate cases of alleged spying came to light. Police believe the US obtained secrets from two Germans, one working in the BND intelligence service, the other in the defense ministry.

Last week, German authorities detained an employee of the BND, who admitted to spying for the US. The suspect allegedly sold more than 200 documents to the CIA for 25,000 euros ($34,000).

This week, authorities questioned a Defense Ministry employee on suspicion of conducting espionage for the US. He has denied the allegations.

The US government has not spoken out directly about the expulsion of its top CIA official in Germany. According to Washington insiders that's partly because Obama's officials cannot agree on how to respond. (11.07.2014)

The German government has ordered the top CIA man in Germany to leave the country. The move comes in response to the discovery of a possible second agent spying on Germany for the US. (10.07.2014)

Germany has expelled the US’ top foreign intelligence chief from Berlin, but Washington has said little on the matter. Spying allegations threaten to fray ties between the allies, a possibility neither wants. (10.07.2014)

Russia's Defense Ministry said the warship sank while being towed to port after suffering damage from a fire. Ukraine earlier said it had struck the ship with missiles.