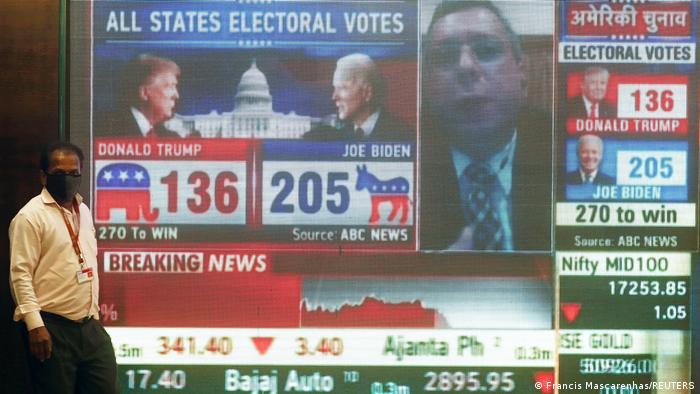 US President-elect Joe Biden is expected to pursue a foreign policy that will be a sharp contrast to his predecessor's "America First" approach.

South Asia, in recent decades, has become an increasingly important region for US foreign policymakers, partly because of  China's growing influence in the region .

Biden will face major challenges in South Asia, whether it is ending US involvement in Afghanistan  or countering China's increasingly aggressive influence in the region.

Read more: US election and Kamala Harris: The view from India

The US signed a peace deal with the Taliban in the final year of Donald Trump's presidency, paving the way for the withdrawal of American troops from Afghanistan. Weeks ahead of the 2020 election, Trump said all US soldiers stationed in the war-torn country would return home by Christmas this year, an announcement welcomed by the Taliban.

Hashim Wahdatyar, a Washington-based Afghan political analyst, believes Joe Biden's victory in the election is bad news for the Taliban who fear that Biden might keep a small presence of troops in Afghanistan.

"The Taliban also think Joe Biden might not stick to the US-Taliban peace agreement," Wahdatyar told DW, adding that Biden may reconsider the deal altogether.

"The new US administration would need proof from the Taliban that the group has eschewed its link with al-Qaeda," he said.

"The Afghan government would definitely want Biden's administration to call off talks with the Taliban since they do not believe the Taliban has cut ties with al-Qaeda or respects human rights," he added.

Post 9/11, Pakistan became an important ally of the US in the war on terror, receiving military and civilian aid. But the alliance has since soured with Washington repeatedly accusing Pakistan of supporting and  harboring terrorists and with Islamabadcozying up with Beijing  in recent years.

"President-elect Biden experienced how billions of dollars in civilian assistance did not change Pakistan's strategic calculus about Afghanistan or its commitment to China," Husain Haqqani, Pakistan's former ambassador to the US, told DW.

Haqqani said he thinks Biden is unlikely to restore economic assistance for Pakistan or "overlook" Pakistan's close relations with China despite Beijing's lack of democracy and human rights abuses.

Nevertheless, Pakistan would still continue to play an important role in the Afghan peace process.

"A Biden administration is likely to be pragmatic in its dealings with Islamabad," he said. "It will press Islamabad to act on terrorism-related issues, (crackdown on) terrorist funding and money laundering, and seek to support peace in Afghanistan," said Haqqani.

"Pakistan wants the good old days of close ties with the US to return," he said, but "American priorities have changed."

"The impending US withdrawal from Afghanistan further erodes Pakistan's leverage with Washington," Haqqani said, adding that Pakistan remains an important nuclear-armed country and will receive the Biden administration's attention.

India is likely to remain the main partner of the US in the region, according to Meera Shankar, India's former ambassador to the US. Shankar expects cooperation in defense and counterterrorism to remain strong.

"From India's point of view, sustaining pressure on cross-border terrorism would be important," she told DW.

India's regional rivalry with China also shapes its relationship with the US, which itself pursues a combination of competition and cooperation with the rising global power.

"Dealing with an assertive and even aggressive China will be the biggest foreign policy challenge for Biden, as it was for Trump," said Shankar, adding that the US approach toward China is likely to be one of simultaneous containment and engagement.

Read more: Can Joe Biden turn around Trump's China policy in the Indo-Pacific?

Bangladesh is one of the fastest growing economies in the world. The country has seen economic growth at a time when most countries are seeing their economies contract. However, Bangladesh has had limited economic engagement with the US in comparison to other countries in the region.

Ali Riaz, a political science professor at Illinois State University, expects this to change under Biden. "It is likely that unlike previous administrations' policy of having an exclusive India-centric South Asia approach, smaller South Asian nations will get more attention," Riaz told DW.

He added that the two countries are also likely to continue cooperation in counterterrorism and intelligence sharing.

"However, there will be some issues which Dhaka will have to address in order to secure US cooperation," Riaz said. "These include democracy, freedom of expression, human rights, and labor rights. Also, its growing close relationship with China might have to be scaled down," he added.

A long history of violence and human rights abuses in Sri Lanka, particularly during its decades long civil war, have been a cause for concern for successive US governments.

The Trump administration largely overlooked these issues and even pulled the US out of the UN Human Rights Council in June 2018.

"Biden's victory brings hope to many people in Sri Lanka as he is expected to restore democratic values and revisit multilateralism," said Asanga Abeyagoonasekera, Director General of the National Security Think Tank of Sri Lanka.

"His administration will intervene more on democracy and the rule of law in South Asian countries in comparison to Trump," he said.

Sri Lanka's strategic location in the Indian Ocean, meanwhile, has attracted heavy investment from China, and to a lesser extent, India. Any US attempt to curb Chinese influence in the region would also have to include the island nation.

"US accusation of China's predatory loans to Sri Lanka will be a concern," Abeyagoonasekera said, but added that overall, the next president would take a more reasonable and democratic approach to the country.

Ties with the US has remained mostly unaltered for the smaller nations in South Asia such as Nepal, Bhutan, and the Maldives in the last years.

However, Surya Raj Acharya, a Nepalese politician, said Washington is hoping these nations participate in its Indo-Pacific strategy, a tactic seen to be aimed at curbing China's influence.

"South Asian countries will have to face intensifying geopolitical heat," said Acharya. "Nepal, in particular, would face a hard time to delicately maintain its non-alignment policy between India and China."

"Bhutan is the world’s only carbon-neutral country and yet is impacted by climate change," Lamsang said. "The commitment of Joe Biden to bring back the US into the Paris Climate Agreement is welcome news," he said.

Biden said he would apply to rejoin the agreement on his first day as president and then "lead an effort to get every major country to ramp up the ambition of their domestic climate targets."