Pakistan claimed to have evidence of India aiding "terrorist" activities from Afghan soil, targeting Chinese interests in its southern province of Balochistan. New Delhi and Kabul have rejected the allegations. 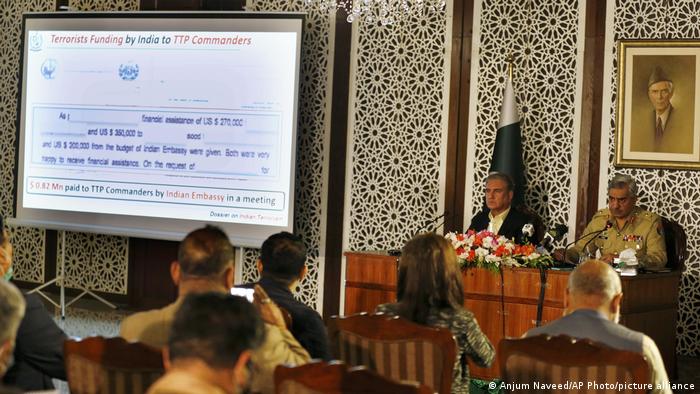 The Foreign Ministries of India and Afghanistan issued statements on Sunday denying Pakistan's allegations that New Delhi was funding militants and training them on Afghan soil.

Pakistan's foreign minister and the military announced in a press conference on Saturday that Islamabad had gathered "irrefutable" evidence of Indian involvement in the "terrorist" activities targeting Pakistan.

The foreign minister added that Pakistan would present the evidence to the United Nations and other international bodies.

Pakistani officials said they had obtained documents that showed India's intelligence agencies had met with and funded members of the Pakistani Taliban and insurgents from the restive province of Balochistan who have claimed responsibility for attacks on infrastructure projects being built by Pakistan's ally China.

Read more: Why India and Pakistan are wrangling over money launderer Altaf Khanani

The Pakistani military accused India of "training, harboring, and launching … terrorists into Pakistan," from 87 training camps — 66 in Afghanistan and 21 in India.

"We expect the international community to force India to end its terrorism & bring to justice those responsible for killing thousands of innocent people in Pakistan," Pakistani Prime Minister Imran Khan said on Twitter.

New Delhi dismissed the allegations on Sunday, calling them "fabricated" and "figments of imagination."

"This is yet another futile anti-India propaganda exercise. The so-called claims of 'proof' against India enjoy no credibility," the spokesperson said.

The Afghan government also rejected the allegation that its territory was being used to train terrorists targeting Pakistan.

"As a major victim of terrorism, we are committed to a policy of combating all forms of terrorism, without discrimination around the world, and will never allow Afghan territory to be used for destructive activities against other countries," the Afghan statement read.

This comes days ahead of Imran Khan's visit to Afghanistan, his first since he became Pakistan's prime minister. The talks are expected to largely focus on the Afghan peace process.

Afghanistan: How Fatima Gailani wants to make peace with the Taliban

Fatima Gailani, one of only four women at crucial peace talks in Qatar's capital Doha, is preparing the way for a new Afghanistan. For her, it's a dream come true. For her country, it's a painstaking endurance test.