Intra-Afghan talks: A long, complicated process with no guarantee of success | Asia | An in-depth look at news from across the continent | DW | 12.09.2020 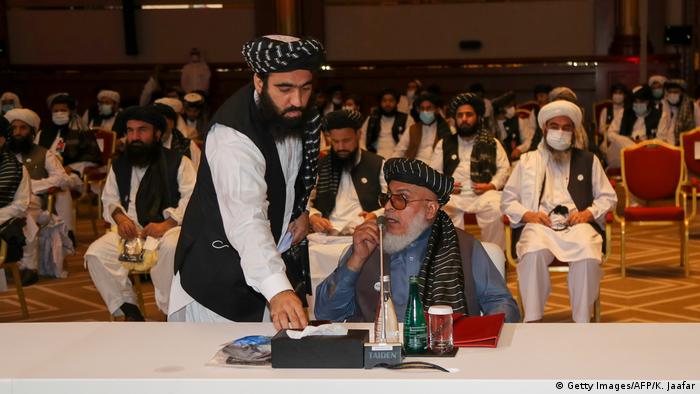 "The State of Qatar is pleased to announce that the Afghanistan Peace Negotiations will commence in Doha on Saturday, September 12," Qatar's Foreign Ministry said in a statement on Thursday.

"These vitally important direct negotiations between the different Afghan parties represent a step forward in bringing lasting peace to Afghanistan."

The Taliban said the dialogue "intends to advance the negotiation process in an appropriate manner and bring about comprehensive peace and a pure Islamic system in the framework of our Islamic values and higher national interests."

The talks were expected to start in March after the United States and the Taliban signed a landmark agreement in Doha, Qatar , on February 29. But the Afghan government and insurgents sparred over the modalities of a countrywide ceasefire and the release of Taliban prisoners, which delayed the dialogue for six months. At the same time, the Taliban continued to attack Afghan forces to maintain pressure on President Ashraf Ghani's government.

Earlier this month, the Islamist group and Kabul agreed to start the much-awaited talks after the Afghan government freed more Taliban prisoners. The Afghan government said Wednesday it sent a small technical team to Doha to prepare the logistics for starting long-delayed peace talks with the Taliban.

Mistrust between Kabul and the Taliban

The Taliban had previously refused to talk to the Afghan government, calling it a US "puppet" regime. Instead, the insurgents opened a dialogue channel with Washington through their political office in Doha. Afghan officials were not involved in the US-Taliban negotiations. US officials, however, made it clear that the insurgents must engage with Kabul after finalizing a deal with them.

US President Donald Trump wants to withdraw most of the American troops currently stationed in Afghanistan as early as possible. Experts say he is likely to go ahead with it regardless of the outcome of the intra-Afghan dialogue. Now it is up to the Afghans to negotiate and agree to a roadmap for peace and a new political set up in their country.

"The Afghan talks [in Doha] could only yield results if both sides agree to make concessions. Agreeing to a ceasefire will be a good start from the Taliban," Sima Samar, the former head of Afghanistan's Human Rights Commission, told DW.

"The Afghan government side will come to the table seeking a ceasefire. It is a wish that has the support across the Afghan political class as well as in Washington, and one that can help build trust and strengthen peace prospects if agreed to by the Taliban," Kugelman told DW. "The Taliban, however, will be in no hurry to agree to a ceasefire, given that it derives so much leverage from violence. The ceasefire issue is a clear disconnect that will be an early challenge in the intra-Afghan dialogue."

Violent attacks in Afghanistan, such as the roadside bomb that exploded close to the convoy of Afghan Vice President Amrullah Saleh on Wednesday, could derail and sabotage the Doha negotiations.

It is clear that the Taliban have an upper hand in the Doha talks. But the Afghan government believes it is the legitimate representative of the Afghan people, having been elected through democratic elections. The question is: will Kabul be able to force the Islamists to work within the democratic framework?

"At the very beginning, the Afghan delegation should make it clear to the Taliban that it wants peace and a ceasefire would be the first step in that direction," Aziz Rafie from Afghanistan Civil Society Forum told DW.

But Humaira Saqib, a Kabul-based rights activist, doubts whether the Afghan government holds that kind of negotiating power. "Although, the government wants to protect the gains from the last two decades, I am not sure how firmly it can negotiate it with the Taliban," Saqib told DW.

It's also not clear how far President Trump's administration is willing to go to back President Ghani during the negotiations.

"I do think there will be pressure from Washington to rush the process along. In reality, this would be a counterproductive move. The best bet for the US is to stop telegraphing its strong intention to remove troops — the more it talks about bringing troops home, the more leverage it gives to a Taliban organization that already has a strong incentive to simply wait the Americans out, and return to the fight once US forces have left altogether," analyst Kugelman asserted.

Although the Taliban have agreed to engage with the Afghan government — for now — they still do not recognize them as a legitimate regime. They also don't believe in parliamentary democracy and want to run the country according to Shariah, or Islamic law. Any potential deal between Kabul and Islamists will remain a distant dream if these fundamental differences are not resolved.

"Both sides have different expectations. For the Taliban, the hope is a deal that will grant them a large degree of power within a political system that may be significantly different than the current one.

For Kabul, the hope is to have a deal in which the Taliban holds only some power, within a democratic system," Kugelman explained. "The truth of the matter is that Kabul has paid insufficient attention to the intended political endgame. There's been so much focus on getting talks to start, that there hasn't been enough on what's needed to ensure they succeed and what to push for in a peace deal."

Experts say the intra-Afghan talks will be a lengthy, complicated affair, and there will be a lot of impediments to overcome for both sides.

"There will be many delicate and complex issues — from the nature and scope of a power-sharing deal to the issue of women's rights and reintegration of former Taliban fighters into Afghan society — that are likely to take years, not months, to negotiate," said Kugelman.

"Looming over this all is a simple but fundamental and troubling question: Does the Taliban truly have an incentive to try to secure partial power through talks, rather than to try to secure total power by force by returning to the battlefield and aiming to overthrow the government?" he added.

With the US heading for an exit from Afghanistan, experts believe the latter option will appear more and more attractive to the insurgents.