US and Taliban sign historic deal to end Afghan conflict

Representatives of the United States and the Taliban have sealed a landmark agreement in Qatar to end the 18-year-long Afghan war. The deal will pave the way for an intra-Afghan dialogue. Shamil Shams reports from Doha.

After the successful implementation of a weeklong reduction in violence in Afghanistan, the US and the Taliban on Saturday inked an agreement to end the protracted conflict.

US Secretary of State Mike Pompeo and the Taliban’s spokesperson in Doha, Suhail Shaheen, attended the deal signing ceremony.

The deal sets into motion the drawdown of US troops from Afghanistan — a key Taliban demand since the start of the conflict in 2001. Within the first 135 days of the deal, the US will reduce its forces to 8,600 from the 13,000 currently stationed in Afghanistan. The agreement  lays out a 14-month period for the withdrawal of "all military forces of the United States, its allies, and Coalition partners, including all non-diplomatic civilian personnel, private security contractors, trainers, advisors, and supporting services personnel."

Both Washington and the Islamist group hailed the deal as a historic milestone, which they say is a major step toward achieving peace in the war-ravaged country.

US troops will start withdrawing from Afghanistan with immediate effect, US President Donald Trump said on Saturday, when asked about the timeframe for the withdrawal. Speaking to journalists, Trump said: "Like today, OK? Today. They'll start immediately." 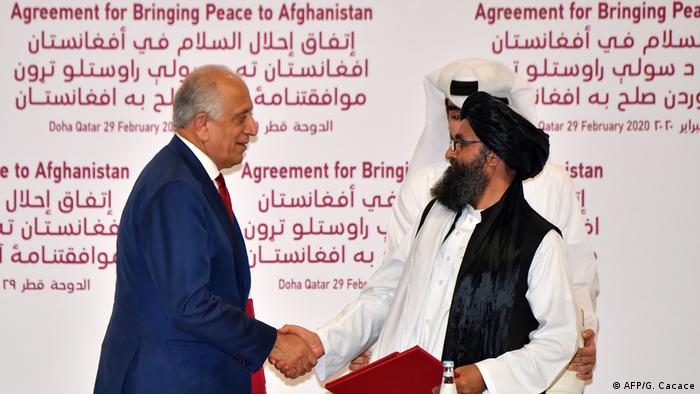 Chance for peace 'should not be missed'

The European Union welcomed the US-Taliban deal as "important first steps" toward securing a lasting resolution to the conflict, but urged for human rights and women's rights to be respected going forward.

"The current opportunity to move towards peace should not be missed," EU foreign policy chief Josep Borrell said in a statement.

US Defense Secretary Mark Esper stressed that the agreement is only the beginning, and that Washington is prepared to pull out if the Taliban fails to uphold the agreement.

"The road ahead will not be easy. Achieving lasting peace in Afghanistan will require patience and compromise among all parties," said Esper.

An Afghan government delegation was also present in Doha to witness the US-Taliban deal, but it did not play a part in it.

The Taliban dub the Afghan government a "US puppet" and have been reluctant to establish direct contact with them.

"The Islamic Republic of Afghanistan has formed a committee to establish preliminary contact with the Taliban," Sediq Sediqqi, the spokesman for Afghan President Ashraf Ghani, told DW ahead of the Doha signing. "We formed it after repeated demands by the Taliban that were conveyed to us by our international allies," he added.

The Taliban, however, continue to downplay the significance of the Afghan government in the process. US and Taliban negotiators have held several rounds of talks in Doha in the past years, without the active involvement of Afghan President Ashraf Ghani’s government.

"We have not invited the Afghan government delegation to Doha. If the US has invited them, it does not concern us," Suhail Shaheen, the Taliban's spokesman in Doha and a member of the group's negotiating team, told DW.

"We will proceed according to the framework agreed in the deal with the US. The framework is clear — we'll first sign the deal, which will be followed by a trust-building phase," Shaheen said. "During the trust-building phase, 5,000 of our prisoners in Afghan jails, and 1,000 prisoners who belong to the Afghan government, will be released. Only after these steps can an intra-Afghan dialogue start."

A previous version of this article stated that the US would pull out 8,600 soldiers from Afghanistan within the first 135 days of the deal. This has now been corrected. The department apologizes for the error.