Opinion: Let Afghanistan be a lesson to US, NATO

After the 9/11 attacks on New York and Washington, DC, the US and its allies invaded Afghanistan. Nineteen years on, international troops are leaving without attaining their goals, DW's Christoph Hasselbach writes. 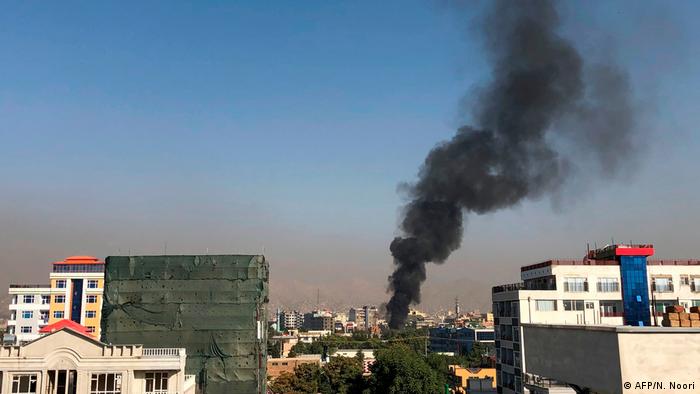 Over the years, President Donald Trump has promised to end the US's "endless wars." The longest and most expensive of these, in Afghanistan, will enter its 20th year in October. It has cost taxpayers over $2 trillion; it has cost more than 2,200 US soldiers their lives.

Trump plans to decrease the number of US troops in Afghanistan from 8,600 to 4,500 by the end of October. He has continued to withdraw troops without consulting NATO allies while pursuing peace talks with the Taliban — once the US's declared enemy in Afghanistan. Trump seems only partially interested in whether negotiations are a success or what role the fundamentalist Taliban will play in shaping Afghanistan's future.

The original aim of the mission was to strike al-Qaida, the terror network behind the attacks of September 11, 2001, by going after the group's training camps in Afghanistan, which had been permitted by the ruling Taliban. In 2002, Germany sent Bundeswehr troops to support the NATO-led International Security Assistance Force established at the end of 2001. The defense minister at the time, the Social Democrat Peter Struck, seemed to announce a new military doctrine in December 2002: "German security is being defended in the Hindu Kush."

The military mission gained broad acceptance for its declared aim of transforming Afghanistan into a democracy. That was something that sold well — even to a German public generally skeptical of the military and foreign intervention.

In a 2011 interview with the Mitteldeutsche Zeitung on the 10th anniversary of the beginning of the intervention, former Bundeswehr Inspector General  Harald Kujat said German troops had primarily been sent to Afghanistan as a sign of solidarity with the US: "But, if we look at our aim of stabilizing a country and a region, then the mission failed." That assessment remains accurate.

In August Fritz Felgentreu, the defense policy speaker of the Social Democrats' parliamentary group, said Afghanistan had "not become a democratic state." Asked about a Bundeswehr officer's report on abuses that took place during the mission, Felgentreu said: "It's no news that human rights abuses and corruption are rampant in Afghanistan — even in the government." No one of rank has disputed that statement.

The global terror threat that emanated from Afghanistan in 2001 has been crushed — at least for now. But the goals of stabilization on democratization have not been met. Now, with the slow withdrawal of Western troops, they are essentially being abandoned.

Germany has paid a high price for its participation: Almost 60 Bundeswehr soldiers have been killed in Afghanistan. The financial cost for Germany lies somewhere between €12 and €16 billion ($14-$19 billion) — depending on whether the sum is limited to purely military expenditures.

The most important lesson to be learned from Afghanistan is a fundamental one: The concept of establishing a Europeann-style democracy there was utterly unrealistic.

Read more:Do confirmed cases reflect the real toll of the coronavirus in Afghanistan?

That is a lesson that can be instructive beyond Afghanistan. In March 2003, less than two years after invading Afghanistan, US President George W. Bush envisioned himself to be on a similarly democratic military mission when he ordered the invasion of Iraq — the consequences of that decision are well documented. Thankfully, Germany stayed out of that one.

Intervention designed to stop the civil war and establish democracy also comes up a lot in discussions on Syria. The same often goes for Libya.

In each case, one could easily be tempted to allow the moral pretensions of exporting values to exceed realistic expectations. But, if Afghanistan has taught us anything, it is that we should be more realistic in our expectations.

Afghanistan peace talks with Taliban look to be a go

Opinion: New Berlin refugee museum must be a place of reconciliation 19h ago