Coronavirus in Afghanistan: Do confirmed cases depict the real picture? | Asia | An in-depth look at news from across the continent | DW | 07.08.2020

Coronavirus in Afghanistan: Do confirmed cases depict the real picture?

According to a new study, some 10 million people in Afghanistan have contracted COVID-19. Official figures, however, are much lower. Experts say it is a result of administrative constraints and low testing. 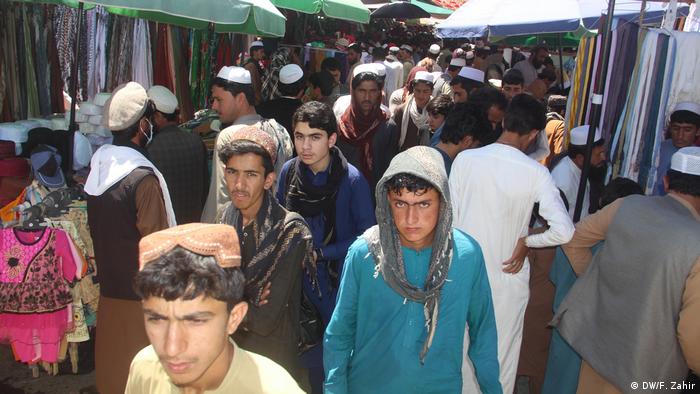 Nearly a third of Afghanistan's population — around 10 million people — has been infected by the novel coronavirus since February, according to a report published by the country's Health Ministry.

The World Health Organization-backed survey revealed that around 31.5% of Afghanistan's population contracted the virus since the country imported its first cases from neighboring Iran.

Ahmad Jawad Osmani, the acting health minister, told local media the survey involved around 9,500 people from across the country.

Officially, Kabul has so far reported around 37,000 COVID-19 cases nationwide and nearly 1,300 related deaths as of August 7.

Yarbaz Hamidi, an Afghan parliamentarian, told DW that the official figure does not reflect the true number of cases as the country has only tested around 90,000 people since the start of the pandemic.

"We should not trust these numbers [official coronavirus figures] because they are not based on accurate and countrywide data," he added.

Government officials say the reason behind conducting the new survey was to prepare for a possible second coronavirus wave. With the help of the new data, authorities will be better equipped to deal with the situation, they say.

"The second wave is already there in many parts of the world and Afghanistan won't be spared. We will use the survey findings to better prepare ourselves," Osmani said on Wednesday.

But some health experts warn the findings of the new survey could be misleading. "The coronavirus testing in Afghanistan has been one of the lowest in the world, and largely inaccurate. It is thus difficult to believe that the survey findings reflect Afghanistan's real COVID-19 situation," Khesrow Sangarwal, clinical director of the North West London Urgent Treatment Centers, told DW.

"So I will take these findings with a pinch of salt. I will certainly not base my pandemic strategy on these surveys," he added.

Parliamentarian Hamidi fears that if the government does not come up with a better strategy, more Afghans could lose their lives. "Hospitals and health officials are not equipped with resources to fight the pandemic."

Despite assurances of financial support from the international community, there are not enough testing kits and medical equipment to treat everyone in Afghanistan.

A lack of strategy

The Afghan government has struggled to control the coronavirus spread with its partial lockdown measures. The ongoing internal conflict between the government and Taliban militants also makes the pandemic impossible to control. More than half the districts in Afghanistan are controlled by the militant group, and hardly any tests are available in these regions. Common people have also largely ignored physical distancing recommendations by health officials.

Even before the coronavirus pandemic, the WHO rated Afghanistan's healthcare system as one of the worst in the world. The pandemic has pushed the system into disarray. Internally displaced people are particularly affected by the pandemic. Many live in crowded camps on the outskirts of cities in unhygienic conditions and without access to healthcare.

Afghanistan is an extremely poor country, with more than half of Afghans living on less than $1 (€0.89) a day, according to a 2019 Gallup study. And the pandemic has only made things worse by driving up the price of food and putting people out of work.

"We are afraid that many people will die primarily from hunger," Nadia Nashir, chairwoman of the Afghan Women's Association, told DW.

"Countries like Afghanistan desperately need support. The healthcare system is not in any condition to provide adequate care, there aren't enough tests, and the ones available are not reliable."