A UN report registered a dozen attacks on health workers at the height of Afghanistan's coronavirus outbreak. Targeting the health care system during the pandemic was ''particularly reprehensible,'' the world body said. 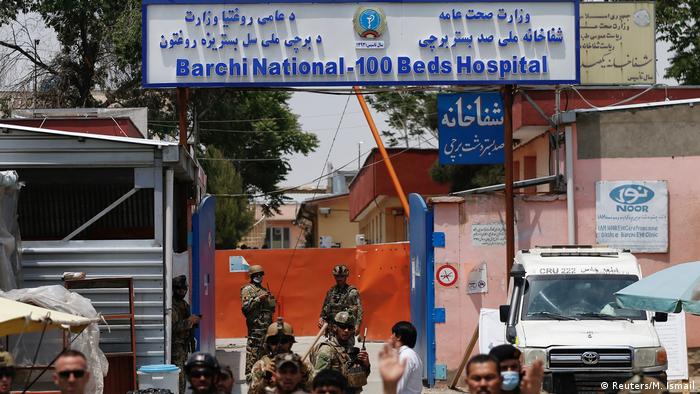 Afghanistan's health care facilities and health workers have fallen victim to ''deliberate attacks' during the country's coronavirus outbreak, the United Nations said in a report published on Sunday.

The UN Assistance Mission in Afghanistan (UNAMA) registered 12 acts of violence targeting health care workers between March 11 and May 23. Eight of them were attributed to the Taliban, while Afghan forces were responsible for three.

But the most horrific attack, which left 24 dead when a maternity ward in Kabul was targeted, is still unresolved, with no group claiming responsibility for it.

"At a time when an urgent humanitarian response was required to protect every life in Afghanistan, both the Taliban and Afghan national security forces carried out deliberate acts of violence that undermined health care operations," UNAMA head Deborah Lyons said in a statement.

''There is no excuse for such actions. The safety and well-being of the civilian population must be a priority,'' Lyons added.

As of June 21, Afghanistan has recorded 28,833 coronavirus cases with 581 deaths. International aid organizations currently monitoring the country's outbreak say the numbers are likely much higher.

The UN report noted that deliberate acts of violence against health care facilities, including hospitals and related personnel, are prohibited under international humanitarian law and as such, constitute war crimes.

''Perpetrating targeted attacks on health care during the COVID-19 pandemic, a time when health resources are already stretched and of critical importance to the civilian population, is particularly reprehensible,'' said Fiona Frazer, UNAMA chief of human rights.

Taliban spokesman Zabihullah Mujahid rejected the UN finding, saying: ''We do not consider these allegations and reports to be accurate.'' Instead, the group claimed it has protected health facilities.

Afghanistan's government has not commented on the UN report.

Violence across the war-torn country dropped following a three-day ceasefire on May 24, but officials now claim that insurgent attacks have increased in recent weeks.

Coronavirus: A hidden catastrophe in Afghanistan

As restrictions are being eased worldwide, the pandemic is slowly reaching its peak in Afghanistan, where the true number of cases is reportedly much higher than official figures. Fear and misinformation run rampant. (04.06.2020)