Coronavirus: Tough times ahead as Afghanistan struggles to manage pandemic | Asia| An in-depth look at news from across the continent | DW | 22.04.2020

Health experts warn that the pandemic could have devastating consequences for the war-ravaged nation. Without a unified response and access to enough tests and ventilators, it risks facing a highly deadly outbreak. 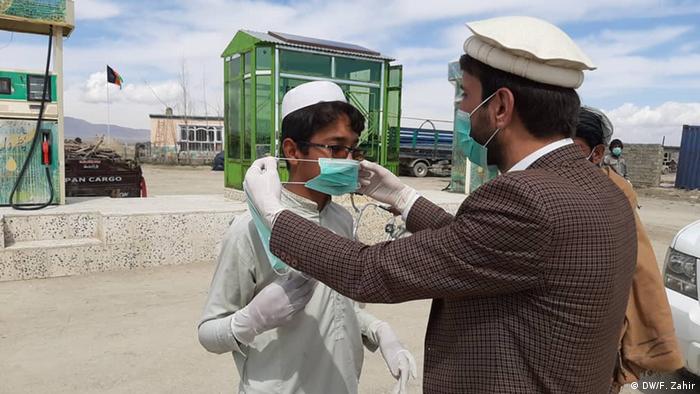 Since then, the virus has spread to other parts of the conflict-ridden nation, with 1,092 confirmed cases and 36 fatalities. But experts believe that the number of infections could be much higher.

"The number is on the rise because we have not yet reached the peak of the pandemic," Wahidullah Mayar, the Afghan Public Health Ministry spokesman told DW. "Therefore, the coming two to three weeks will be very critical for us," he added.

The number of people tested for coronavirus in Afghanistan remains very low, with only 6,612 tests conducted so far in a country of over 35 million.

"We have a shortage of tests," Mayar said, adding that Kabul was working to resolve the issue and had received 5,000 testing kits on Monday, with 3,000 more arriving by the end of the week. The Afghan government is aiming to purchase 100,000 extra coronavirus testing kits, but it is unclear if the deal will be finalized due to high demand worldwide.

Medical experts, however, stress that testing is an essential tool in identifying infections early on in order to isolate the patients and halt the spread of the disease.

"Testing has been negligible in Afghanistan, and this will take a tragic toll on the country over the coming weeks and months," Khesrow Sangarwal, the clinical director of the network of North West London Urgent Treatment Centers, told DW.

In addition to a shortage of tests, there is a shortage of ventilators and trained staff to administer the use of the medical machines in Afghanistan. According to health officials, Afghanistan only has 300 ventilators available for the entire country, and is planning to buy 300 more. However, like the tests, obtaining the much-needed ventilators could prove to be a challenge due to high global demand for the machines.

Even if Kabul is able to obtain the ventilators, finding qualified staff could be difficult. "It is not just the machines that are needed, you will also have to train and retrain professionals to use those machines," said Sangarwal.

Afghan officials implemented a lockdown in Kabul at the end March to fight the rapid spread of the virus. Other provinces soon followed suit. Despite the lockdown, many locals still left their homes in order to find work or buy essential goods.

The measures also took a particularly heavy toll on the many poor families across Afghanistan who rely on daily wages. "I waited the whole day, but no one offered me work. I have nothing left and don't know what will happen," 60-year old Sawab Khan, who is responsible for providing for his family of 10 in eastern Khost province, told DW.

The Afghan government has launched a program to help those in need with food and other essentials, but it remains unclear how many families have so far received the aid.

In other cases, many provinces failed to ensure that the lockdown was effective. In western Kandahar, for example, local officials introduced a lockdown during the day, but allowed shops to open at night.

"I don't understand the logic of this decision because a virus spreads the same way at night as it would during the day," Mukhtar Ahmad Afghanyar, a local activist, told DW.

A lack of public awareness about how the virus spreads, combined with misinformation about medical staff's conduct with COVID-19 patients, has convinced some Afghans to take matters into their own hands, with life-threatening consequences in some cases.

"I had symptoms of the virus but I never went to the hospital because they are not able to do anything, so there was no point in visiting a doctor," Kabul resident Abdullah, who like many Afghans has only a first name, told DW. Many people who went to the hospital didn't receive their test results for several days, he added.

Abdullah was never tested, but his wife, who has pre-existing medical conditions, later came down with the same symptoms.

As many regions lack their own tests, health officials have had to resort to sending samples to Kabul, resulting in days- and sometimes weeks-long waits to get test results back.

Facing multiple crises at once

The coronavirus pandemic has not put an end to violence in Afghanistan. At least 19 pro-government forces were killed by the Taliban in night attacks in the northern Takhar province, officials said Monday, while the militant group has been carrying out attacks against Afghan security forces in other provinces, despite signing a peace deal with Washington in February.

The Taliban have rejected all calls for a ceasefire during the pandemic, making it impossible for healthcare workers to access the millions of Afghans living in areas under the group's control.  At the beginning of the outbreak, the Taliban claimed to have the capacity to test suspected COVID-19 patients and offer health services to locals, but officials doubt that the claim is true.

On top of the armed conflict, Afghanistan is also facing a major political crisis as President Ashraf Ghani's main rival in the 2019 elections, Abdullah Abdullah, continues to contest the result of the vote. Both Abdullah and Ghani took parallel oaths of office last month, as efforts to bring the two sides together continued to fail.

Despite the conflicts, however, it is essential for Afghans to work together if they want to control and minimize the damage caused by the pandemic, according to Sangarwal. But it's unlikely that the Afghan government and the Taliban will cooperate to test Afghans across the country, as both sides continue to target each other despite the health crisis.

"This pandemic cannot be combated in sections. If we have learned anything from this pandemic, it is the fact that we cannot hide behind borders," said Sangarwal.

Afghanistan: No women, no peace

The US special envoy who negotiated a deal with the Taliban says a first prisoner swap between the rebels and the government has been a step toward peace. He said the coronavirus threat made the swap even more urgent. (13.04.2020)

Ghani's re-election: How will it impact the US-Taliban deal?

Ashraf Ghani's re-election as Afghan president has been slammed by his political opponents. Experts say the success of an imminent US-Taliban deal now depends on how much support Ghani receives from Washington. (20.02.2020)