Afghan peace process: Is Washington running out of patience? | Asia | An in-depth look at news from across the continent | DW | 09.04.2020 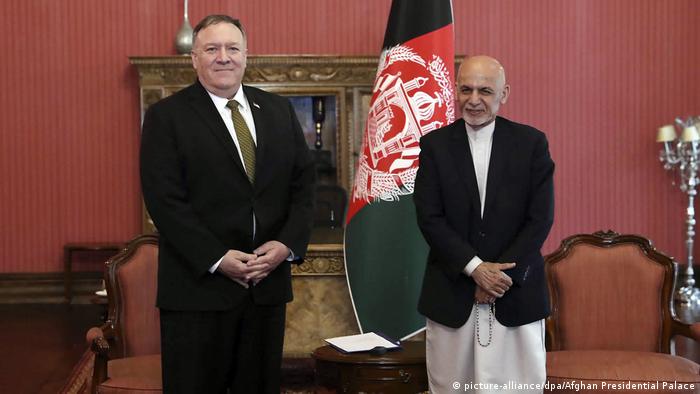 The US and the Taliban signed a historic deal  to end the 19-year-long Afghan conflict on February 29, however, there hasn't been much progress on its implementation since then.

The deal stipulates that Afghan authorities release up to 5,000 Islamist prisoners in exchange for some 1,000 pro-government captives. The prisoners' release is a pre-condition to a lengthy and complicated intra-Afghan dialogue, which was originally planned to commence on March 10.

But the Afghan government has been reluctant to release Taliban prisoners, demanding that the militant group halts all attacks as a pre-condition. The Taliban has linked the reduction in violence to prisoners' release.

"The Afghan government is making excuses to delay the release of our prisoners," Suhail Shaheen, the spokesman for Taliban's political office in Qatar, told DW.

"But let me be clear: the intra-Afghan talks won't start until Kabul frees all our prisoners," Shaheen added.

On Wednesday, President Ashraf Ghani's government released 100 Taliban prisoners but the move did not satisfy the insurgent group. Media reports say the Taliban was hoping that Kabul would free 15 of its imprisoned commanders in the first batch.

"We cannot release those who killed our people," Matin Bek, an Afghan government negotiator, told reporters on Monday. "We don't want them to go back to the battlefield and capture territories," he added.

Michael Kugelman, a South Asia expert at the Washington-based Woodrow Wilson International Center for Scholars, believes the problem lies with the US-Taliban deal.

"The problem is that the US-Taliban agreement was asking for the moon – in effect, it was expecting too much to happen too soon," Kugelman told DW, adding that the prisoners’ release issue is "a critical obstacle."

"And the problem is that neither side is willing to compromise."

The Taliban have also accused the US of violating the Doha deal by targeting its fighters.

"The [Doha] agreement clearly states that the US can only defend [itself] in certain cases… US troops will not attack our mujahideen [Islamic warriors] or carry out night raids," Shaheen said.

"These actions could harm the deal," he added.

Taliban leaders are also unhappy with Washington's faliure to force the Afghan government to implement the deal. The group wants the next phases of the deal to be completed soon.

"The US-Taliban negotiation was different, because in that case each side had a clear goal: negotiate an agreement leading to a US troop withdrawal plan," Kugelman said.

"With the intra-Afghan dialogue, everything is more complicated and there are more divergences."

Implementing the Doha deal is not an easy task for Washington. Afghanistan’s political crisis is worsening, with both Ashraf Ghani and his rival Abdullah Abdullah declaring themselves presidents after last year’s election.

US Secretary of State Mike Pompeo warned Afghan leaders that Washington can reduce its financial aid for the war-torn country if Ghani and Abdullah don’t reach an agreement soon.

Experts say that Ghani fears that he won't be able to hold on to power after the start of a formal peace process. The process could require an interim government to oversee the peace process, or even a new political set up that excludes Ghani."For these reasons, Ghani will do everything he can to safeguard his hold on the presidency during this uncertain period – and that entails not giving an inch to Abdullah," Kugelman said.Read mo
Read more: Afghanistan's endless political disarray imperils US-Taliban deal

Can the US act unilaterally?

The situation could force President Donald Trump to take matters in his own hands. The US leader wants to bring troops home before the presidential vote in November. Experts say there is a limit to his patience.

"I think it's quite simple: if the peace process doesn't move forward and the intra-Afghan talks don't begin, then I imagine the administration will give up its mediation efforts, scale down its engagement, and potentially even expedite its withdrawal of troops from Afghanistan," said Kugelman.

Naseer Weyar, a Kabul-based analyst, is of the view that the success of Afghan peace process now depends on President Ghani and his team.

"If Ghani manages to make peace with Abdullah and keep the US by his side at the same time, the peace process can move forward," Weyar said. "Otherwise, Washington could look for another partner in Afghanistan."