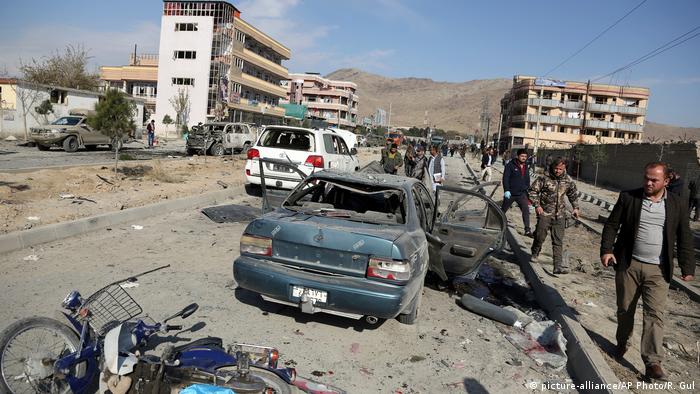 All the victims were thought to be from the same family, the police said.

No group has claimed responsibility for the attack, but both the Taliban and the "Islamic State" militants are active in the province.

The bombing happened one day after a three-person Taliban delegation had arrived in Kabul to meet with Afghan officials, despite a nationwide lockdown due to the coronavirus. The arrival of the Taliban negotiators on Tuesday marked the first official visit to the capital city since the Taliban regime was toppled in 2001.

The delegation will oversee a prisoner exchange process, which is part of a peace agreement reached between the Taliban and the United States in Doha, Qatar, at the end of February. It is seen as a key step toward intra-Afghan talks aimed at ending decades of war in Afghanistan.

The exchange calls for the Afghan government, led by President Ashraf Ghani, to free 5,000 prisoners in exchange for 1,000 government personnel and troops held by the Taliban.

Though the Afghan government has been riven by infighting, Ghani's negotiating team has been endorsed by Abdullah Abdullah, President Ghani's main rival.

Zabihullah Mujahid, a spokesman for the militant group, said Wednesdsay that as a result of the talks, "One hundred prisoners will be released in first batch, then both sides will assess whether releasing 100 per day is working out well or not."

The prisoner release is a sticking point, as Taliban and Afghan government have differed over the process of identification and transportation. Mujahid added that the lockdown due to coronavirus added to the challenge.

US Secretary of State Mike Pompeo praised both sides on Tuesday. He had flown to the region last week to urge both sidesto move forward with the peace process.