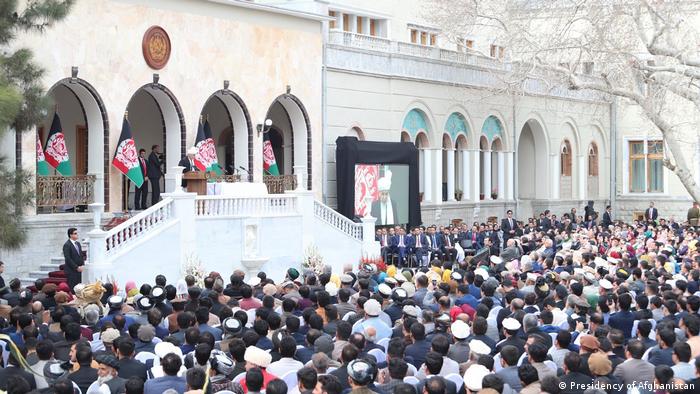 After the US and the Taliban reached a deal recently to end the protracted conflict in Afghanistan, the US military announced on Tuesday that it had begun withdrawing troops from the war-torn country.

A prisoner exchange between the Taliban and the Afghan government is also expected soon in accordance with the deal.

The most crucial aspect for peace in Afghanistan moving forward will be the intra-Afghan talks between the Taliban and Afghanistan's government. But following Monday's presidential inauguration debacle, a big question remains: Who is leading Afghanistan?

Incumbent Afghan President Ashraf Ghani and his main political rival, Abdullah Abdullah, are both claiming to be Afghanistan's duly elected president. Both held parallel "inauguration" ceremonies Monday at the same palace in the capital Kabul.

Last month, Afghanistan's Election Commission declared Ghani the official winner of September's election by a narrow margin. However, amid claims of vote rigging by the electoral complaints commission and successive delays in getting the count right, Abdullah rejected the results.

Washington's Afghan peace envoy, Zalmay Khalilzad, said Tuesday that he hopes the rival leaders can "come to an agreement" on an "inclusive and broadly accepted" government. The US had hoped to avoid the establishment of a parallel government in Kabul.

On Monday, US Secretary of State Mike Pompeo warned against using force to resolve political differences, as both Ghani and Abdullah have the backing of warlords and militias. How the post-US transition plays out will greatly depend on if and how the two leaders can reconcile.

Nothing more than 'political theater?'

According to Andrew Watkins, senior analyst for Afghanistan at the International Crisis Group, a Brussels-based think tank, the relative calm during the competing inaugurations could be interpreted as a sign that intergovernmental rivalry won't necessarily spiral into violence.

"Abdullah's ceremony was a fairly spectacular protest against the legitimacy of the re-elected president," Watkins told DW.

"Yet even though it took place just a small wall across from Ghani's ceremony, it did not prompt tensions or unrest: not in the palace grounds, and not more widely across Kabul or the country."

"It is impossible to say how governance will unfold in the face of such a visible challenge from political opposition, but the rest of the country's relative state of calm today seems like a potential indicator: at least up to this point, these events may still be considered political theater."

Discussions between the Taliban and the Afghan government to lay the groundwork for a political settlement were due to start Tuesday.

The Taliban had demanded the release of thousands of prisoners as a sign of confidence and a prerequisite to starting the intra-Afghan talks. This first step appears to be in motion, as the Taliban told Reuters news agency Tuesday that they had sent vehicles to Bagram Prison to pick up released prisoners.

However, it is unclear if the Afghan government is prepared to negotiate with one voice, if and when negotiations do begin.

"It is unclear if key compromises on the timing of prisoner exchange or comprehensive ceasefire will be necessary to initiate talks, or how the political opposition will now be included in the pro-government negotiating team, given how far this standoff has progressed," said analyst Watkins, adding that the conflicting leadership at the top would most likely delay the start of talks.

"Even if an initial session comes about on or near schedule, substantive sessions may well be delayed until key questions about the negotiating team can be resolved," he said.

Both Ghani and Abdullah have issued statements saying they have prepared negotiating teams to open intra-Afghan talks, and both claim to represent all of Afghanistan. However, neither leader has introduced their team members, and as the March 10 kickoff date passes, talks have yet to begin.

With or without US

Despite being wary of a two-track Afghan government, US Secretary of State Pompeo said he welcomed statements by both Ghani and Abdullah that showed a commitment to upholding the peace process with the Taliban.

As a condition for US military withdrawal, Washington is demanding that the Taliban not provide any support to foreign militants in Afghanistan.

On Tuesday, the US military spokesman in Afghanistan Sonny Leggett said in a statement that the US had begun a "conditions-based reduction of forces to 8,600 over 135 days.''

The US currently has around 13,000 troops stationed in Afghanistan. Eight thousand are involved in training and advising Afghanistan's security forces.

But as the US begins to draw down its presence in Afghanistan, it will be up to the Afghan government to set the course for the future with the Taliban. As the political division continues, the Taliban could be placed in a more advantageous position in negotiating with a fractured government.

The US-Taliban deal in Doha has been hailed as a landmark achievement. However, the agreement provides no guarantee for upholding women's rights. What does it mean for the future of Afghan women? DW analyzes. (05.03.2020)

US conducts first airstrike on Taliban since peace deal

The "defensive" strike was the first US attack on the Taliban since the two sides agreed to a reduction in violence. A spate of deadly attacks recently have cast doubt on a freshly-signed peace deal. (04.03.2020)