The US special envoy who negotiated a deal with the Taliban says a first prisoner swap between the rebels and the government has been a step toward peace. He said the coronavirus threat made the swap even more urgent. 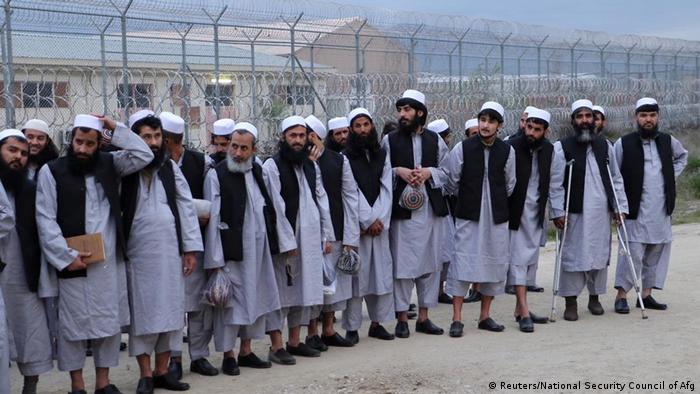 Newly freed Taliban prisoners line up at the Bagram prison, north of Kabul, on April 11

The US special envoy for Afghanistan, Zalmay Khalilzad, on Monday welcomed the release by the Taliban of 20 prisoners taken from among Afghan security forces, calling it "an important step in the peace process and the reduction of violence" in Afghanistan.

He added that both the Afghan government and the Taliban should meet the targets laid out in the US-Taliban agreement he helped broker as soon as possible in view of the threat to prisoners posed by the current coronavirus outbreak.

The Taliban, who have been waging a yearslong insurgency against the government since being ousted from power in a US-led invasion in 2001, released the prisoners on Sunday, according to the International Committee of the Red Cross. The move came after hundreds of Taliban held by the government were set free last week.

Under the deal signed by Khalilzad and the Islamist group on February 29, the Afghan government is to release altogether 5,000 Taliban prisoners and the insurgents are to free 1,000 captive Afghan security force members. The prisoners' release is a pre-condition to a lengthy and complicated intra-Afghan dialogue.

The deal paves the way for military forces from the US and other countries to leave the war-ravaged nation, as is demanded by the Taliban.

The prisoner exchange was scheduled to have taken place by March 10, but was delayed after both sides accused each other of making demands going beyond the agreement.

Kabul says it has now released 300 low-risk Taliban prisoners, who have pledged not to return to the fight and are being let go based on various factors including their health, age and length of remaining sentence.

US Secretary of State Mike Pompeo made the announcement after a surprise visit to Kabul. He said the inability of Afghanistan's two rival leaders to reach a power-sharing deal threatened US interests. (24.03.2020)

The US-Taliban deal in Doha has been hailed as a landmark achievement. However, the agreement provides no guarantee for upholding women's rights. What does it mean for the future of Afghan women? DW analyzes. (05.03.2020)

Why is the Afghan conflict not receiving international attention? 29.07.2022

In an interview with DW, Zalmay Khalilzad, a former US envoy to Afghanistan, said that the international community is now dealing with other "urgent" problems such as the war in Ukraine. He urged the Taliban to agree to a future roadmap for peace.