For the second time in a week Turkey has fired at US-backed Syrian Kurdish forces. The uptick in tensions has prompted the US-backed SDF to halt operations against the "Islamic State." 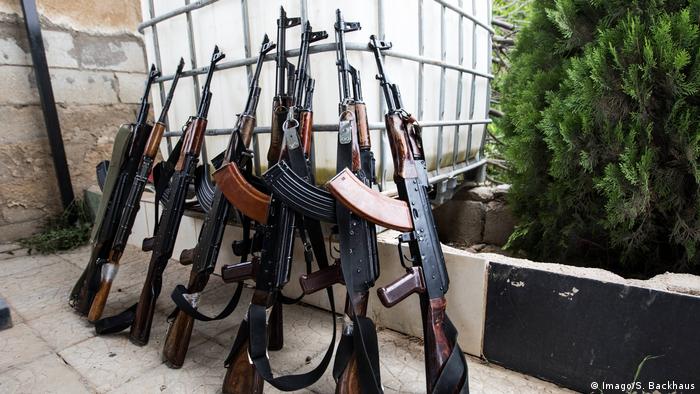 The US-backed Kurdish-led force in Syria on Wednesday said it would temporarily halt operations against the "Islamic State" group (IS) after its forces came under fire by the Turkish military.

The Syrian Democratic Forces (SDF), a mixed Arab-Kurdish force led by the YPG Kurdish militia, said Turkish attacks in the northern Kobane region had forced units "to stop our current operation temporarily" against the last IS strongholds near the border with Iraq.

The Turkish military said in a statement on Wednesday that a border command post in Sanliurfa province came under "harassment fire" from Kurdish "terrorist organization" forces, resulting in one military vehicle being destroyed.

Turkish forces responded with immediate counterfire that "liquidated 10 terrorists," the defense ministry said. It was the second time this week that the Turkish military fired on SDF forces east of the Euphrates.

The YPG militia posted a video on Twitter of what appeared to be a Turkish military vehicle being destroyed by a guided missile.

The escalation comes a day after Turkish President Recep Tayyip Erdogan told his party lawmakers that the military was preparing to launch an operation against Kurdish forces east of the Euphrates River.

"We have completed all preparations for the east of the Euphrates. We will soon be rolling over the terrorist organization with effective operations. We can come suddenly any night," he said.

The SDF now controls more than a quarter of Syrian territory after its Kurdish dominated forces beat back IS jihadis with US support over the past three years. Most of the Kurdish-controlled territory lies east of the Euphrates. There are about 2,000 US Special Forces in Syria advising the SDF, as well as several hundred French troops.

The State Department said it was in touch with both Turkey and the SDF to de-escalate the situation.

"Unilateral military strikes into northwest Syria by any party, particularly as American personnel may be present or in the vicinity, are of great concern to us," State Department spokesman Robert Palladino told reporters on Wednesday. "Coordination and consultation between the United States and Turkey on issues of security concern is a better approach."

The US military estimates around 2,000 IS fighters are holed up in and around Hajin along the Euphrates River valley in Deir el-Zor province near the border with Iraq.

Last week, IS jihadis staged a counterattack following a weekslong SDF offensive in the countryside around Hajin. The counterattack killed at least 72 SDF fighters and forced the Arab-Kurdish force to withdraw from Hajin and halt operations as reinforcements were sent in.

The tensions along the border between US-backed forces and Turkey come despite Washington and Ankara agreeing in June to a "road map" to ease tensions around the northern Syrian town of Manbij.

The strategic town lies west of the Euphrates and was taken by SDF forces from the Islamic State in 2016. Turkey had repeatedly threatened to attack the town despite the presence of US forces in the area.

Part of the road map calls for joint US-Turkish patrols near Manbij, which Turkish Defense Minister Hulusi Akar said on Tuesday would begin any day. It also envisions Kurdish YPG forces withdrawing from the town to the east of the Euphrates. 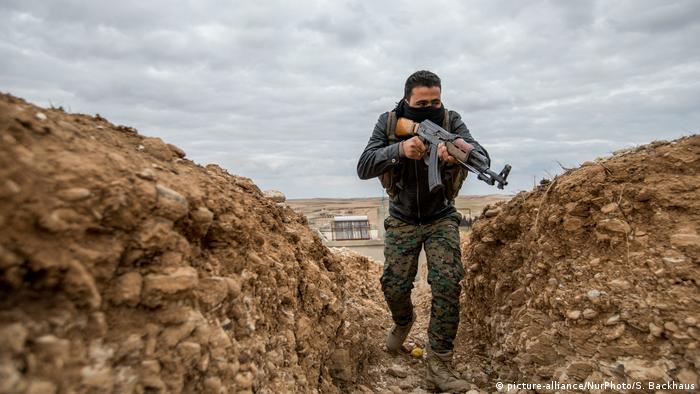 SDF forces have dug trenches around Manbij and other areas near the Turkish border. This week, Erdogan said: "The terror organization is digging trenches, they are preparing their graves."

Despite the Manbij road map, Erdogan and the Turkish military have repeatedly stated they plan to advance east of the Euphrates to the clear the border of "terrorists."

A seven-month Turkish-led military operation in 2016-17, dubbed Operation Euphrates Shield, pushed IS out of a section of northern Syria and blocked Kurdish forces from advancing further west of the Euphrates.

In September, an agreement forged between Turkey and Russia to create a demilitarized zone in rebel-held Idlib province prevented a possible Syrian offensive that sparked fears of a humanitarian disaster and hundreds of thousands of refugees fleeing north of the border.

German authorities said as many as 249 people may have left the country to fight "Islamic State" (IS) in Syria and Iraq. The statement came in response to questions from Left party politicians in parliament. (26.10.2018)

The German chancellor demanded free elections in four-way talks in Turkey on the possibility of peace in Syria. Merkel and the leaders of France, Russia and Turkey are hoping to capitalize on a shaky ceasefire agreement. (27.10.2018)