The German chancellor demanded free elections in four-way talks in Turkey on the possibility of peace in Syria. Merkel and the leaders of France, Russia and Turkey are hoping to capitalize on a shaky ceasefire agreement. 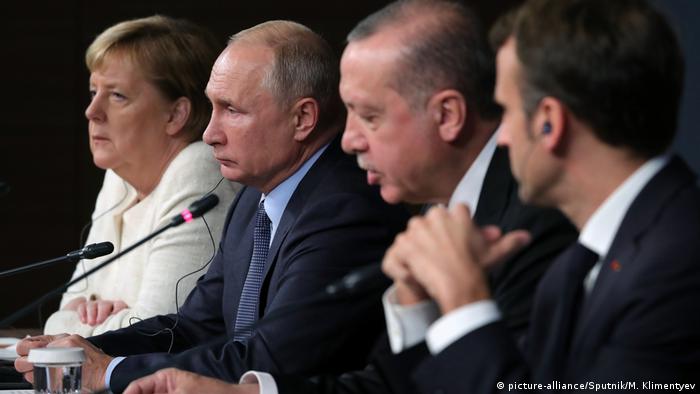 German Chancellor Angela Merkel met with the leaders of Turkey, Russia and France in Istanbul on Saturday to try and find common ground on the future of Syria.

After meeting with the leaders, Merkel called for a political process to end the conflict under the auspices of the United Nations, with the ultimate goal of free elections.

"At the end of this political process, there must be free elections to which all Syrians have access — including the diaspora," Merkel told a news conference.

Her comments were echoed in a joint statement issued by Turkish President Recep Tayyip Erdogan and the other three leaders.

"We have called for the process of forming a constitutional committee to be finalized as soon as possible," Erdogan said a joint press conference. "Our desire is it is formed by the end of this year."

The joint statement also focused on refugees and the long-term enforcement of a ceasefire in Idlib. The northwestern province is the only significant area that remains in rebel control.

Russia and Turkey last month agreed on a buffer zone around Idlib, but violence surged ahead of the summit. Putin said on Saturday that Turkish partners are fulfilling their obligation in Idlib.

Macron underscored the importance of the ceasefire: "We will all be extremely vigilant to ensure that these commitments are met and that the ceasefire is stable and sustainable," he told reporters.

Read more: Syria summit: What Germany wants, and how it might help

"Syrian people, at home and abroad, will decide the fate of Assad. It is not up to people here," Erdogan said. "Assad is a person who killed 1 million of his people. He is not in a credible position for us."

The four leaders face a massive hurdle in their divided views on Assad, who is backed by Russia and Iran. Assad's forces have retaken control of most of the rebel-held territory in the country.

The conflict in Syria, which erupted in 2011, is still raging in parts of the country. More than 360,000 people have died and millions have fled or been displaced.

Saturday's meeting took place as Macron and Merkel continue to be at odds over the lucrative sale of weapons to Saudi Arabia in response to the murder of journalist Jamal Khashoggi. Merkel opted to halt the arm sales, while Macron denounced her decision as "demagoguery."

Despite the disagreement, Macron's office said the two leaders enjoyed a "relaxed exchange" at the Syria summit and agreed to coordinate jointly on the Saudi issue "at the European level" in the future.

Russian President Vladimir Putin said IS fighters have captured hundreds of hostages, including several US and European nationals. He said they were taken from an area controlled by US-backed forces. (18.10.2018)

After serving four years as the UN's go-to person for the conflict in Syria, Staffan de Mistura is leaving the post. His predecessors previously quit in frustration over the global deadlock on ending the war. (17.10.2018)

Nagorno-Karabakh: Azerbaijan, Armenia accuse each other of breaking cease-fire 4h ago