Mixed signals and comments from Trump over a refugee deal are roiling relations with close ally Australia. The issue raises larger questions over the new administration's handling of foreign policy. 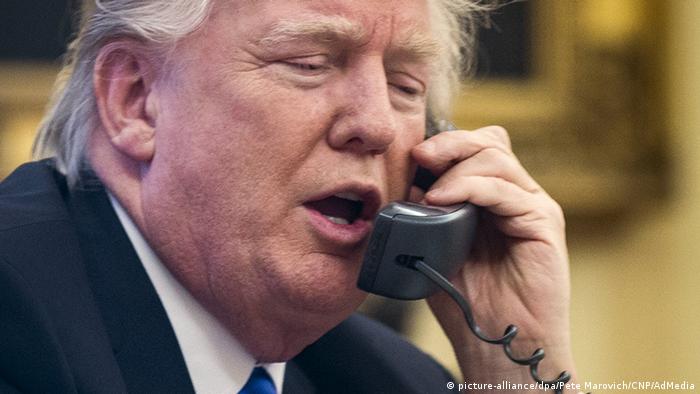 US President Donald Trump on Wednesday called a refugee swap deal the Obama administration made with Australia "dumb," after the Washington Post reported the new president had a heated conversation with Australia's prime minister.

Prime Minister Malcolm Turnbull insisted again on Thursday that Trump had agreed to honor the agreement struck with the Obama administration in November to resettle some of the 1,600 refugees languishing in detention centers Australia has set up in Nauru and Papua New Guinea. In return, Australia agreed to take some refugees in the United States from Guatemala, El Salvador and Honduras.

However, The Washington Post reported Trump told Turnbull on Saturday in their first telephone conversation since the new president took over that it was "the worst deal ever" and accused the Australian prime minister of trying to export the "next Boston bombers" - a reference to Tamerlan and Dzhokhar Tsarnaev, two Chechen US citizens who carried out the 2013 Boston Marathon bombings.

Trump told Turnbull he was "going to get killed" politically, the Post reported.   "I don't want these people," Trump reportedly said. He also said that he had spoken to four world leaders on Saturday, including Russian President Vladimir Putin, and "this is the worst call by far."

The Australian leader did not comment on the report, which also alleged Trump hung up the phone 25 minutes into a conversation that was planned for an hour. "It's better that these things - these conversations - are conducted candidly, frankly, privately," he told reporters. "I can assure you the relationship is very strong."

Pressed about the call after the tweet, Turnbull told Sydney radio 2GB that Trump did not consider it a good deal but "he has given his commitment."

Trump's public fuming and the alleged content of the call has rankled foreign policy circles, who questioned how the new president turned what would normally be an easy phone call into a mini-crisis. The issue has dominated Australian news, sparking commentary over relations between the two countries with Trump in the presidency.

Australia is one of the United States' closest allies and part of the so-called "Five Eyes" group of countries that share sensitive intelligence.  Trump last week said the US would withdraw from the Trans-Pacific Partnership trade deal, something Turnbull described as a "big loss."

Trump's statement that he would "study" the refugee agreement cast doubt and sent mixed signals. White House spokesman Sean Spicer confirmed on Wednesday that Trump had agreed to honor the deal. But the White House said in a statement to the ABC on Thursday that "the president is still considering whether or not he will move forward with this deal at this time."

Meanwhile, the State Department said Thursday it would honor the deal "out of respect for close ties to our Australian ally and friend."

"President Trump's decision to honor the refugee agreement has not changed and Spokesman Spicer's comments stand," the State Department said.

The ABC have reported that US officials are already processing refugees on Nauru and Papua New Guinea.

Asylum seekers who try to reach Australia by boat are sent to detention facilities on Papua New Guinea's Manus Island and in the small island nation of Nauru. Under Australia's strict border policy, they are prevented from receiving asylum even if found to be refugees.

Protesters have abseiled down the front of Australia's Parliament House with a banner calling for the closure of refugee camps. They demanded better treatment for asylum seekers. (01.12.2016)