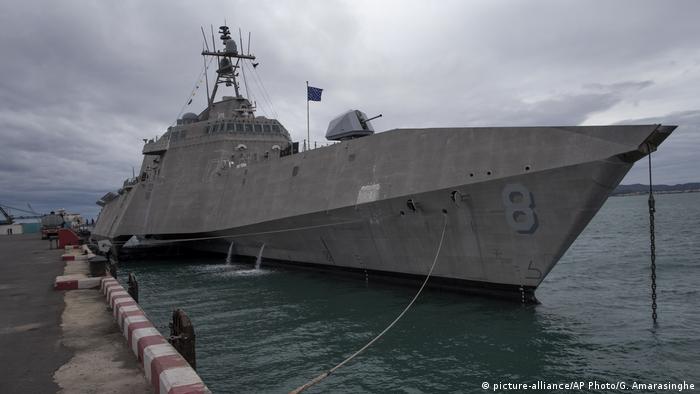 Joint US-ASEAN naval exercises started Monday at the Sattahip Naval Base in Thailand, with eight warships, four aircraft and over 1,000 military personnel from the US and 10 Southeast Asian countries taking part in five days of drills and tests.

The ASEAN-US Maritime Exercise (AUMX) is taking place as the US increases its engagement in the South China Sea amid Chinese territorial claims and tensions between Beijing and Southeast Asian nations. It will be co-led by the US and Royal Thai navies.

According to a statement from the US embassy in Bangkok, the exercises will take place in "international waters," including the Gulf of Thailand and the South China Sea, and will conclude in Singapore.

The purpose of the exercise is to "maintain maritime security, focus on prevention and preempt wrongdoing in the sea."

The US Navy said in a statement that the exercises would "execute a variety of realistic scenarios designed to reinforce interoperability." These include search and seizure drills, tracking drills and increasing cooperation in maritime domain awareness.

Parts of the South China Sea are claimed by Brunei, Malaysia, Vietnam and the Philippines, while China says most of the waters are part of its territory.

China has demarcated an extensive area of the sea with a so-called "nine-dash line" that first appeared on Chinese maps in the late 1940s.

In 2018, ASEAN conducted similar drills with China as the regional bloc walks a tightrope between Washington and Beijing.

Collin Koh, a strategic analyst at the S. Rajaratnam School of International Studies (RSIS) in Singapore, told DW that the joint drill with the US is part of ASEAN's strategy of asserting its strategic influence in the region.

"By and large, ASEAN member states adopt their own approaches in minimizing the chances of being negatively affected by the US-China rivalry while seeking to reap benefits from that dynamic," he said.

Koh emphasized that ASEAN does not necessarily view the often hostile relationship between the US and China as negative, but rather as an opportunity to cement its own importance and global standing.

The AUMX comes amid the latest territorial flare-up in the South China Sea, this time between China and Vietnam. In July, a Chinese gas survey ship and escort naval vessels entered waters in the Vietnamese exclusive economic zone (EEZ), which Hanoi saw as a violation of its territorial sovereignty.

The Pentagon last week accused Beijing of efforts to "violate the rules-based international order throughout the Indo-Pacific."

Read more: Will the US fight for oil in the South China Sea?

The move has also complicated negotiations over China's so-called code of conduct in the South China Sea, which is "ensure peace and stability." Washington has criticized the code as forcing ASEAN countries to acquiesce to unfavorable terms set by Beijing.

China has constructed seven man-made islands in the South China Sea and equipped them with military runways and outposts.

The US Navy frequently carries out so-called freedom of navigation exercises in the region by sailing ships through international waters.  These frequently come into contact with Chinese naval ships.

The South China Sea is an important shipping route where an estimated $5 trillion (€4.5 trillion) worth of trade passes every year.