Singapore defense minister: Cost of conflict in South China Sea ′too high′ | Asia | An in-depth look at news from across the continent | DW | 18.02.2019

In an interview with DW, Singapore's Defense Minister Ng Eng Hen downplayed concerns over a major confrontation emerging in the region and said that calling China a regional hegemon was a matter of "opinion." 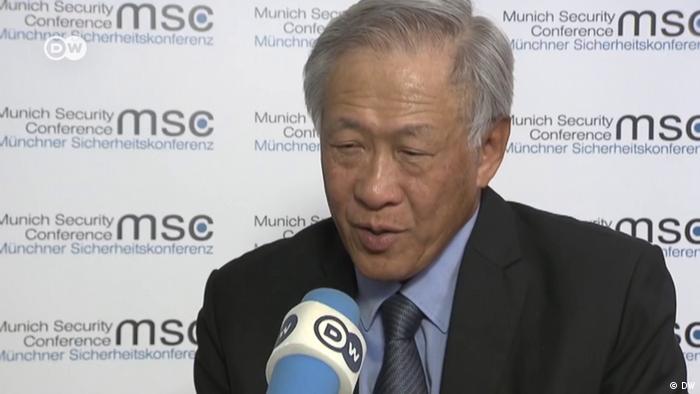 China and several Southeast Asian countries, including Vietnam, the Philippines, Indonesia and Malaysia, have competing claims over territorial waters in the South China Sea (SCS). In recent years, Beijing has been building airstrips and hangars, as well as stationing anti-aircraft and anti-missile systems in the Spratly Islands — a collection of reefs and rocks located off the coast of the Philippines.

At this year's Munich Security Conference, Singapore's Defense Minister Ng Eng Hen spoke to DW about the importance of multilateral cooperation and transparency between countries in avoiding conflict.

DW: The South China Sea has been a flashpoint for quite some time. In case of an all-out military confrontation, what could Singapore do to diffuse tensions?

Ng Eng Hen: I don't think an all-out confrontation will take place. All the parties involved — the claimant states and the international community — recognize that the price is too high and the issues in the South China Sea do not warrant an actual physical confrontation.

Having said that, it doesn't mean there can't be any miscalculations or mishaps. This occurred recently when the [USS] Decatur during a freedom of navigation operation came close to a Chinese ship. We all recognize that there's been dispute over territorial claims of China, the Philippines, Vietnam, Malaysia and Indonesia, with a slight overlap of their exclusive economic zones (EEZs) with the nine-dash line [China's demarcation line in the South China Sea].

All the claimant states have built on the disputed territory. Some argue that China has built more — whatever the case, all have done so. Whatever China has done, whether it's in the Spratlys or the Paracels, has allowed them to operationalize their forward defense line. It's now some 800 kilometers (500 miles) from the mainland coast, with intelligence, surveillance, reconnaissance capabilities, extended runways, which can accommodate their planes including aircraft and fighter jets. The features on the South China Sea have point defense systems. I doubt if anyone is thinking of pushing the Chinese off.

Are you worried about it? Do you think it could also endanger Singapore's security?

Not Singapore's security, but you know the South China Sea is one of the busiest sea lines of communication, carrying a sizeable load of global trade and functioning as a maritime passage for oil — a strategic asset. But all the countries know that. So it's not so worrisome for Singapore. They will be careful not to precipitate any confrontation. In fact, on the ground, there have been some incidents, but on a historical scale and compared to some other regions, it's significantly less.

Do you think China's belligerence and increasing hegemony could pose a challenge to other countries as well?

That's an opinion. From China's perspective, they term it a peaceful rise, which they want other countries to participate in and to that extent, I think there is some truth to it. For the past decade, in the aftermath of the global financial crisis, when Europe and America were in economic doldrums, it was Chinese growth that sustained Asia.

I remember meeting a group of businessmen at the time, including American and European businessmen, and asking them: "Where would you have liked to be in this decade?" And almost to a tee, all of them said Asia. So I wouldn't mischaracterize China's role.

We recognize that China (had made) claims on the nine-dash line, as well as

the arbitral ruling that the Philippines brought upon the Chinese, making a declaration in terms of claims and what the features are entitled to. Well, China has to square that — their position — with international law. The Chinese approach has been to establish a code of conduct with the claimant states and with the Association of Southeast Asian Nations (ASEAN).

ASEAN appears to be a bit split on the South China Sea issue. What role can Singapore play to help the regional players find common ground?

There's been the declaration of conduct, which preceded the code of conduct, signed by all ASEAN leaders and China in 2012. There has been a consensus statement with the defense and foreign ministers of ASEAN, who consistently declare their resolve for the dispute to be settled by peaceful means and respect for international law.

As to the role Singapore can play: we take a very practical approach. When Brunei had the chair [at ASEAN], we persuaded them to hold an 18-nation maritime exercise, and we succeeded in doing that. This was also an exchange of ten ASEAN countries plus eight others.

Recently, as chair, Singapore facilitated the first ASEAN-China maritime exercise — in China. I think our approach is that you have to increase these engagements to reduce the risk of miscalculation. The ASEAN defense ministers' meeting has also set up hotlines so that you can deescalate.