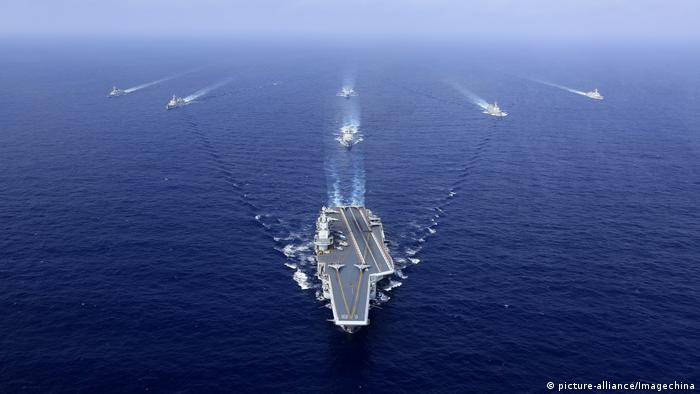 China said on Monday that it has warned two US ships sailing near disputed islands in the South China Sea to leave the area.

The move comes amid heightened tension between Beijing and Washington over trade tariffs, sanctions and Taiwan.

Warships in the South China Sea

Foreign Ministry spokesman Geng Shuang told a press conference that China "is strongly dissatisfied and is resolutely opposed" to the US operation.

"The relevant moves by the US ships infringed upon Chinese sovereignty, and damaged the peace, security and good order of the relevant seas," Geng said. "China urges the United States to stop such provocative actions."

Geng added that China would continue to take the necessary steps to defend its sovereignty.

Commander Clay Doss, a spokesman for the US Navy's Seventh Fleet, told Reuters that the "innocent passage" aimed "to challenge excessive maritime claims and preserve access to the waterways as governed by international law."

Disputed waters: The 3.5 million-square-kilometer (1.4 million-square-mile) body of water, which lies between China, Vietnam and the Philippines, in the Pacific Ocean, sees one third of the world's shipping traffic. China occupies several islands in the sea and frequently reprimands the US and its allies over their naval operations. Brunei, Indonesia, Malaysia, The Philippines, Taiwan and Vietnam also have competing claims in the region.

Trading barbs: Washington claims Beijing is militarizing the South China Sea by building military installations and artificial islands and reefs. Monday's operation was the latest attempt by the US to counter what it sees as China's efforts to limit freedom of navigation in strategic waters. China defends its construction as self-defense, saying the US is responsible for increasing tensions in the region by sending warships and military planes close to the islands it claims.

Tense US-China relations: The dispute in the South China Sea is one of several quarrels between the world's two biggest economies. US President Donald Trump has ignited a trade war with the far east nation — on Sunday, he threatened to raise tariffs on $200 billion ($178 billion) of Chinese goods from 10% to 25%. Beijing also laments the US recognition of Taiwan, which it still considers part of China, and has warned of "consequences" after Washington imposed sanctions on the Chinese military over its purchase of Russian fighter jets.