US ambassador for religious freedom: ′It′s a fundamental right for everybody′ | World | Breaking news and perspectives from around the globe | DW | 25.09.2019

US ambassador for religious freedom: 'It's a fundamental right for everybody'

The US ambassador for religious freedom, Sam Brownback, says the US is a leader in the field. But he told DW's Tim Sebastian it did not claim to be perfect.

"There is no nation on the earth that pushes human rights of religious freedom any more than the United States or than the Trump administration does."

"This is a human right. It's in section 18 of the UN Declaration of Human Rights. It is a fundamental human right," the Republican politician said.

"Do you think China is better on religious freedom?" Brownback asked.

While many world leaders gathered to discuss efforts to curb climate change, US President Donald Trump was attending an event at the United Nations on protecting religious freedom around the world. Before the conference, Brownback sat down with DW’s Tim Sebastian for Conflict Zone. 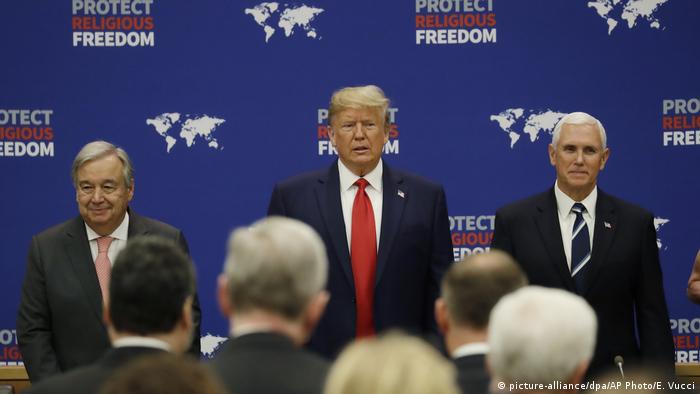 US President Donald Trump (C.) spoke at a 'religious freedom' event during the UN General Assembly

How does the ambassador explain the Trump administration’s early efforts to ban the entry of Muslims into the United States?

"What you're putting forward here [is] an immigration issue," Brownback said. "And by the way, we're not a perfect country and we don't claim to be."

What about the president’s recent comments on Jewish Americans being disloyal if they voted for his political opponents, the Democrats?

"I'm not going to comment on those one way or the other. I've got enough work to do in this job on religious freedom," Brownback said.

"That’s the lane I’m in, that’s what I comment on," Brownback added, echoing other Republicans on controversial comments from President Trump.

Religious freedom as the barometer of individual rights?

Brownback says religious freedom is tied to other basic rights around the world.

"Often religious freedom or the persecution of people of faith is one of those first issues that happens to gets manipulated the most, the earliest and you can see countries that really honor religious freedom tend to be ones that also honor First Amendment rights of free speech and of assembly," the former US senator claimed.

When challenged about his praise of the United Arab Emirates, despite restrictions on press freedoms and harassment and abuse of journalists, Brownback had no direct defense, but instead pointed to a visit by Pope Francis to the UAE earlier this year.

Sebastian continued with his questions: "What do you think the people who are put in jail for their views thought about it? Do you think that comforted them?" 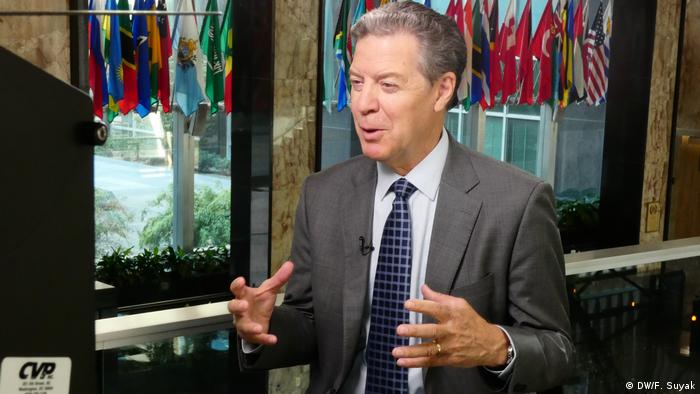 Brownback: 'We're not a perfect country'

Is the Trump administration’s focus on religious freedom too narrow? Critics, like the Freedom House, say, "The US cannot effectively promote individual liberty, human equality, or democracy by narrowing the definition of human rights to exclude broad categories of rights or people."

Brownback’s response: "So, the Obama years this was being done much better and progress was getting made?"

“I didn't say anything about Obama,” Sebastian answered.

Sebastian asked the ambassador about US praise of Egyptian President Abdel-Fattah el-Sissi despite his escalating campaign of intimidation, violence and arrests against political activists and critics.

Brownback said there was also criticism from Washington, "But I also believe there are people trying to work with this government in Egypt, saying this is a major player in the Middle East and it's somebody that we need to work with."

US support for el-Sissi came despite concern in Congress about the erosion of political and human rights in Egypt.

"When I was in the Senate I worked a lot with Hosni Mubarak. And President Mubarak had a lot of problems and he did a lot of things that were highly questionable. But you're still saying - Okay then, what's the alternative?" Brownback said.

Sebastian pointed out the restricted conditions Egyptian Christians faced and "live in a minefield of legal and social discrimination."

Brownback said things in Egypt had still improved, “They would rather have the current situation than what they had.”

Sebastian pointed out that Coptic Christian churches were still being closed, “if you're praising him for respecting religious freedom. It would be nice if they were. 14 churches were shut down by the authorities between September 2016 and April 2018. With Coptic Christians denied access to them and prayer services prohibited.”

The ambassador said those kind of issues are in his report on Egypt.

But Brownback avoided explaining his refusal during his confirmation hearing to directly answer whether there were no circumstances under which religious freedom could justify criminalizing, imprisoning or executing people on the grounds of their LGBT status. Why didn't he answer?

"I'm not sure at that time. But we, I, stand for whatever those rights are that the State Department has been supporting."

Sebastian pushed the point. "You don't believe in discrimination on the grounds of sexual orientation."

"No, I don't. I support what the State Department does in this area."

Pope Francis is on a visit to the United Arab Emirates. Although the country is considered relatively religiously tolerant for the region, Human Rights Watch's Wenzel Michalski says it harshly cracks down on dissent. (05.02.2019)