Pope Francis is on a visit to the United Arab Emirates. Although the country is considered relatively religiously tolerant for the region, Human Rights Watch's Wenzel Michalski says it harshly cracks down on dissent. 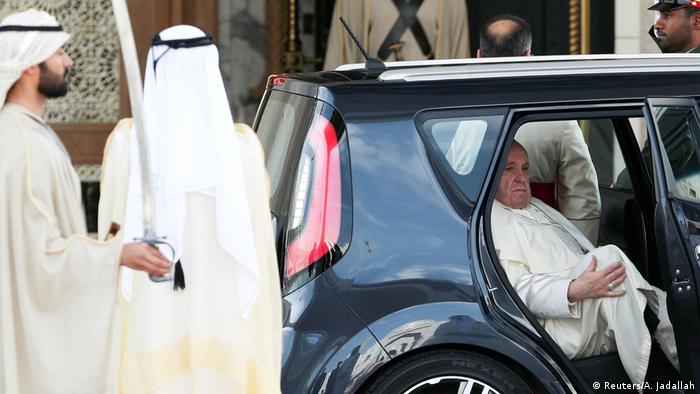 DW: Pope Francis is on a trip to a country that has earned the reputation as a relatively tolerant state, especially in regard to religion. The claims are that different religions get along well with each other and that the coexistence of ethnic groups is peaceful. One could think that all sounds progressive.

Wenzel Michalski: Yes, that is the reputation they have acquired. But is not true, and that they enjoy such a reputation is completely unjustified. The UAE is not a tolerant state. There are massive violations of human rights, especially when it comes to free speech and freedom of assembly.

Those who exercise their rights risk landing in jail. Recently two prominent human rights defenders were sentenced to 10 years in prison: one for criticizing Egypt and the other for speaking out against the general human rights situation in the country. The state is taking severe and brutal action against opponents and critics.

Human Rights Watch is also critical of a law passed in 2014 that gives the state legal grounds to take action against critics and dissidents. 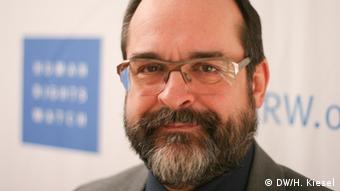 Wenzel Michalski is the director of Human Rights Watch in Germany

Yes, the state's fear of criticism must be extreme so that anyone who dares to criticize the political situation or human rights in the country can be now defamed as a "terrorist" and therefore can face correspondingly harsh punishments.

It seems more and more that countries in the region have deliberately blurred laws on the basis of which dissidents can be defamed as "terrorists."

Unfortunately, this is a trend in many countries in the Middle East, but also increasingly in Southeast Asia, Russia and, of course, China, where nearly identical laws and regulations are used to nip any criticism in the bud.

Your organization wrote an open letter to the pope asking him to address the human rights situation while in the UAE. Are you counting on him to do so? Or would you rather utilize his visit to highlight the situation in the first place?

Both. On the one hand, we have used the spotlight created by the pope's visit to draw attention to the situation of human rights in the country. At the same time, we are also trying to draw awareness to the country's role as a part of the [Saudi-led] coalition in the war in Yemen. The UAE is responsible for many civilian deaths. And we expect the pope not only as leader of the Catholic Church, but also as head of state of the Vatican, to stand up for human rights as stipulated by the United Nations.

Human Rights Watch has documented attacks carried out by the Saudi–led intervention in Yemen, of which the UAE is a part, including some that could be considered war crimes. Can you describe what you have found?

There has been a plethora of attacks carried out on civilian targets such as hospitals, schools, factories, homes, markets — monstrous incidents where civilians were the targets of rocket attacks. The number of casualties — including children, women and people who are not soldiers — was so great that one could classify them as war crimes, and we demand that these incidents be investigated. We would also like the pope to address this directly.

Human Rights Watch has also raised concern about the plight of guest workers in the UAE, especially those coming from poorer Southeast Asian countries. In what conditions do they live?

Generally speaking, the situation for migrant workers in the UAE is very bad, partly because no one can be held accountable. And because there are no consequences if an employer breaches their duties, for example, no longer pays workers or even harasses them.

The conditions of those employed to do domestic work, who are mostly women from the Philippines, are incredibly bad — some of them are deliberately subjected to torture. They have no opportunity at all to look for alternative work or to return to their home country. They live in almost slave-like conditions. They are not free. They cannot leave. Even being dismissed from their jobs is essentially regarded as trying to escape, which is also punishable.