Borussia Dortmund fielded a weakened side for their Europa League match in Greece ahead of Sunday's clash with Bayern Munich. The yellow-and-blacks scored late on to secure a point in the Europa League. 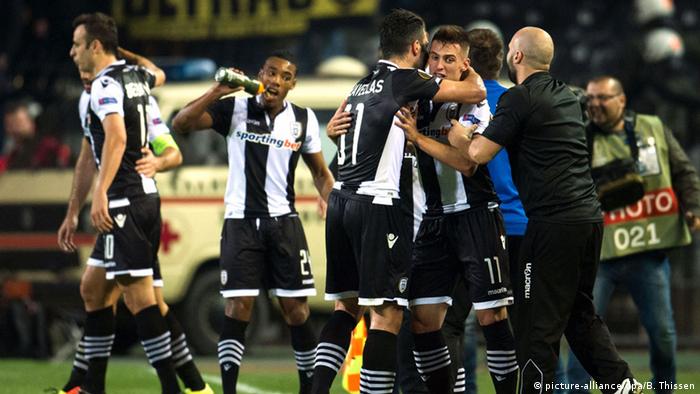 Borussia Dortmund avoided their first competitive game under Thomas Tuchel after Gonzalo Castro secured a point at Greek side PAOK Salonika in the UEFA Europa League.

Robert Mak had scored first for the home side who were the better side for long periods. But after one-or-two tweaks in the second half, the Germans earned a little bit of luck as Castro's cross trickled all the way past PAOK keeper Robin Olsen to seal a point.

Thomas Tuchel made eight changes to the side which drew 2-2 at home to Darmstadt on Sunday with a view to the weekend's clash at the Allianz Arena. Only Julian Weigl, Henrikh Mkhitaryan and Marco Reus were included in Greece. "We aren't underestimating our opponents," emphasized Tuchel whose side are about to close a busy phase in the season.

Jonas Hofmann returned to the side and shot over the crossbar inside the first 30 seconds. The most notable player in the PAOK Salonika ranks was former Leverkusen, Manchester United and Spurs striker Dimitar Berbatov. The 34-year-old is still a threat in-and-around the box for the Greek side. Dortmund defender Neven Subotic wasn't taking any risks, sprinting back to dispossess the Bulgarian forward who would have had a free shot on goal.

On 23 minutes, Adnan Januzaj combined with Hofmann on the counterattack, but Robin Olsen was up to the task. However, it was the hosts who took the lead on 34 minutes when former Nuremburg attacker Mak breezed into the penalty box and smashed his shot off the underside of the crossbar and past Roman Weidenfeller. 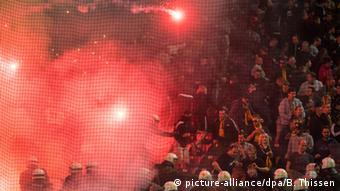 Subotic made a brilliant intervention when Mak crossed from the right-wing on 50 minutes. The Slovak winger had picked out Berbatov in the box and the Bulgarian striker was ready to convert from close range, if not for the clearance from the centre-back.

With the game slipping away from the yellow-and-blacks, Tuchel made a tactical adjustment with Marcel Schmelzer and Adrian Ramos replacing Julian Weigl and Henrikh Mkhitaryan. Perhaps the change was motivated by Sunday's forthcoming match, but it was nonetheless effective, with Dortmund taking control.

Reus' free kick on 70 minutes forced a fine stop from Olsen, but the keeper was beaten less than four minutes later. Castro's chipped cross from just outside the box deceived the PAOK keeper and found spot in the bottom corner of the net. Olsen made a big save four minutes from the end, brilliantly turning a deflected shot from Reus over the crossbar.

Dortmund top Group C in the Europa League with four points from two games, while Krasnodar secured a 2-1 win at home against Qabala of Azerbaijan.

Schalke's excellent start to the season continues with a thrashing of Asteras Tripolis in Gelsenkirchen. But Augsburg were left disappointed on their home European debut against Partizan Belgrade. (01.10.2015)

Join DW Sports for matchday two of the UEFA Europa League. Augsburg and Schalke kick off early, while Borussia Dortmund are in Greece later. Elsewhere, Liverpool, Celtic, Fiorentina and Spurs are in action. (01.10.2015)

Three Bundesliga clubs are in action in the Europa League on Thursday. One has seen a dip in form, one is concerned for the future of its head coach and the other is ready to win it's sixth game in a row. (30.09.2015)