Schalke's excellent start to the season continues with a thrashing of Asteras Tripolis in Gelsenkirchen. But Augsburg were left disappointed on their home European debut against Partizan Belgrade. 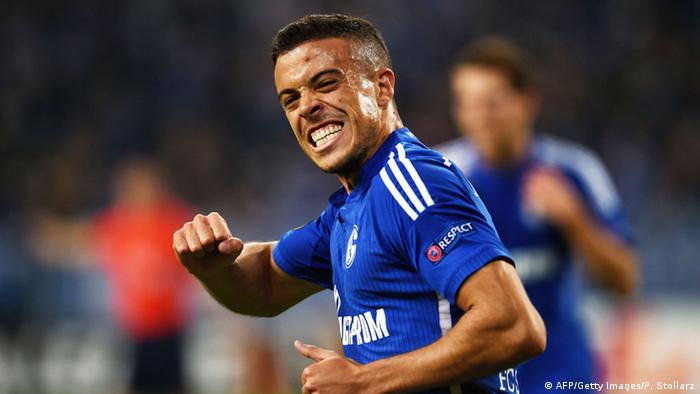 Franco di Santo's first hat trick for Schalke made it six competitive wins on the spin as the Royal Blues beat Asteras Tripolis 4-0.

The Argentine centre-forward hadn't scored since the German Cup win at Duisburg, but he ended that barren run in superb style, scoring a hat trick inside 44 minutes. Klaas-Jan Huntelaar scored his 49th goal in European competition late on as Schalke's best start in 44 years continues.

Andre Breitenreiter has the best points-per-game record in the Bundesliga of all the club's head coaches with the Royal Blues sitting in third after seven games. Breitenreiter made six changes to the starting line up from the 1-0 win at Hamburg on Saturday evening.

It's a sign of how things have changed at the Veltins Arena that the Royal Blues can take their foot off the gas in Europe and still win comfortably. Leroy Sane almost scored in the first minute, while Leon Goretzka's well-timed run at the back post deserved a goal.

On 28 minutes, Di Santo scored his first, ending his drought in front of goal for his new club. Sascha Riether provided the delivery from the right-flank, the decoy run from Johannes Geis opening up the room for Di Santo to coast in and beat Kostas Theodoropoulos.

Seven minutes later, Di Santo had his second of the game, heading in Geis' corner kick at the near post. The lead could have been three seconds later as Pierre-Emile Hojbjerg charged into attack from midfield, but struck his shot from 15 yards against the woodwork.

Two minutes before the half time break, the referee punished Eder for a handball in the box. Di Santo stepped up and netted his third of the night, putting the Royal Blues on course for another three points in the Europa League.

Amid media reports of interest from Liverpool, Sane continued to deliver. The 19-year-old's quick dribbling and intelligence forced Tripolis into what looked like clumsy fouls at first glance.

But Sane, playing on the left, was too dangerous and he set up Huntelaar towards the end with a defence-splitting through pass, leaving the Dutchman the easy task of scoring the fourth with six minutes to play. 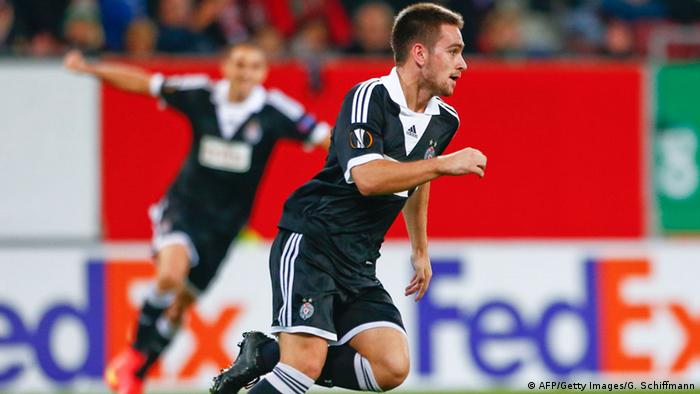 Despite a gallant effort, Augsburg went down in their first-ever home match in European competition after a 3-1 defeat against Partizan Belgrade.

The Serbian league champions scored twice on the counterattack through Andrija Zivkovic, while Ji Dong-Won turned the ball into his own net on 53 minutes. Augsburg managed to find the net once through Raul Bobadilla, but Markus Weinzierl's side will be ruing a number of missed chances.

However, Partizan were fortunate to keep the score line blank early on. Bobadilla reacted quickly to the cross in the 12th minute, but his finish was blocked by Gregor Balazic. On 20 minutes, the bulky forward fired a free kick at goal and forced the first serious save out of Zivko Zivkovic.

Augsburg lost 3-1 in their maiden European outing in the Spanish city of Bilbao two weeks ago, yet scored first through attacking midfielder Halil Altintop and performed impressively. But their poor finishing in attack is a weakness at European level and Thursday's game in Augsburg followed the same pattern.

Bobadilla's first effort on 27 minutes was blocked but the ball was thrown back into the box and Tim Matavz could only manage to head wide from close range. The Serbian champions looked surprisingly pedestrian when in possession of the ball, but they did have legs on the counterattack. On 31 minutes, talented 19-year-old forward Zivkovic held up the ball in attack, worked his way into space and then shot past Marwin Hitz for the opener.

But just as the first half panned out, Augsburg couldn't convert dominance into goals and were punished by a vastly-experienced European outfit. Partizan keeper Zivkovic frustrated the home side with two fine saves to deny Alexander Esswein and Bobadilla from point-blank range. Minutes later, Partizan extended their lead through an own goal from Ji Dong-Won.

On 57 minutes, Bobadilla eventually found the net after several attempts, his finish coming off the back of a brilliant passing move involving Philipp Max and Altintop. But within five minutes, Zivkovic rifled home his second of the game - and third of the campaign - and

The red card for Aleksandar Subic had little bearing on the outcome of the game as Zivkovic made a couple of solid saves in the final minutes to keep Partizan ahead. The Serbians held on to secure back-to-back wins in the group after their 3-2 victory against AZ on matchday one.

Check out Thursday's Europa League action as it happened as Borussia Dortmund secured a draw in Greece. Augsburg went down at home, while Franco di Santo scored a hat trick for Schalke in a 4-0 home win. (01.10.2015)