A total of 128 UN member states voted in favor of a draft measure that declares US President Trump's Jerusalem decision "null and void." The overwhelming backing for the resolution came despite US threats to cut funding. 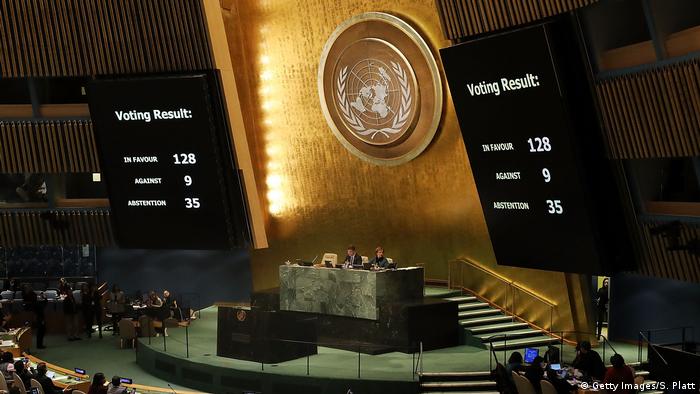 An emergency session of the United Nations General Assembly passed a resolution on Thursday condemning US President Donald Trump's decision to name Jerusalem the capital of Israel.

A total of 128 countries voted in favor of the measure, nine voted against it and 35 countries abstained.

The United States and Israel were joined by Guatemala, Honduras, the Marshall Islands, Micronesia, Nauru, Palau and Togo in opposing the measure. Washington's North American neighbors Canada and Mexico abstained along with several eastern European countries, including Poland, the Czech Republic and Romania.

Alongside many Middle Eastern countries, much of western Europe supported the measure, including Germany, France, the United Kingdom and Spain.

Support for the measure was lower than expected and 21 countries were absent, leading some to believe Washington's threat to cut off financial aid to countries that support the measure may have had an impact.

The draft resolution before the 193-member UN General Assembly reaffirms that Jerusalem is an issue that must be resolved through peace negotiations with Palestine and Israel. It would also make Trump's recent Jerusalem decision "null and void."

A spokesman for Palestinian President Mahmoud Abbas welcomed the result, calling it "a victory for Palestine."

After the vote, the German Foreign Office tweeted its reasoning, writing that "the status of Jerusalem should be negotiated between Israelis and Palestinians. It should not be prejudged."

Israeli Prime Minister Banjamin Netanyahu thanked Trump for his stance on Jerusalem and condemned the vote. Earlier, he slammed the UN as a "house of lies."

"Israel rejects the UN decision and at the same time is satisfied with the high number of countries that did not vote in its favour," said a statement from Netanyahu's office.

Turkish President Recep Tayyip Erdogan said on Twitter that the vote showed the "illegality" of Trump's Jerusalem move and urged for the US to "rescind without further delay its unfortunate decision."

'Today we are the seekers of peace'

Prior to the vote, Palestinian Foreign Minister Riyad al Malki referenced the US threat that it was "taking names" of those who vote in favor of the measure.

US ambassador Nikki Haley earlier reiterated Washington's threat to other countries concerning the vote in her comments to the international body.

"The United States will remember this day in which it was singled out for attack in the General Assembly for the very right of exercising our right as a sovereign nation," she said.

"And we will remember when so many countries come calling on us, as they so often do, to pay even more and to use our influence for their benefit," Haley added.

Trump's decision on December 6 to recognize Jerusalem as Israel's capital and to move the US embassy there broke with decades of US foreign policy and broke with international consensus on the issue.

The move also sparked protests around the world and outrage from Palestinians, who want the eastern sector of the city to be the capital of an independent Palestinian state.

The measure was vetoed by the US at the UN Security Council on Monday although all other 14 council members voted in favor of the draft.