Shortly after Trump said the US would recognize Jerusalem as Israel's capital, the Jewish Museum Berlin opened an exhibition investigating the history of the city where religion and politics are inextricably interwoven. 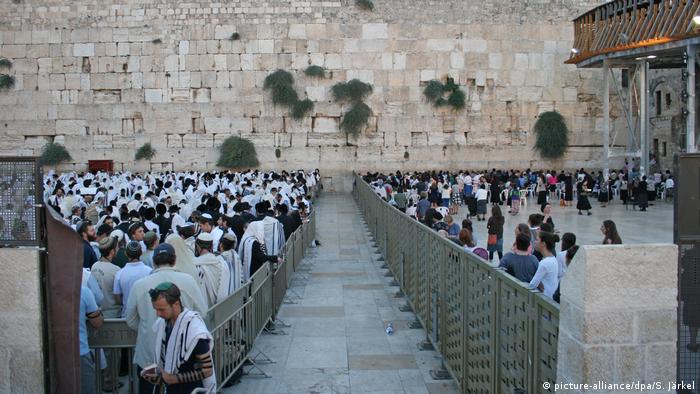 After US President Donald Trump declared Jerusalem "the eternal capital of the Israeli state," and Israeli Prime Minister Benjamin Netanyahu called on European countries to follow suit, the political situation in the Middle East has become more volatile than ever.

In a coincidence that was neither expected nor intended, Berlin's Jewish Museum has opened an intriguing exhibition on Jerusalem at just this moment. The title of the show, which has been in the works for years, is "Welcome to Jerusalem," which could sound ambivalent or even ironic in the current geopolitical context.

"Jerusalem is a city that stands for both hell and heaven on earth," explains curator Cilly Kugelmann. "We spent a lot of time thinking about how we could reduce such a complex theme to just a few square meters."

And that theme is ultimately religion. "We then decided to focus on the holiness of the place that outshines everything, its vivid times, quiet times and politically active times," says Kugelmann. "One could almost say that Jerusalem has been contaminated by holiness."

To this end, Kugelmann has relied on the city's famous "aura," a kind of special light that makes some visitors feel closer to God. The inhabitants of a metropolis that live almost daily with confrontations and existential threats are indeed keen to bathe in that divine light. Because as much as it is holy, Jerusalem is also at the center of the Middle East conflict. The fact that it's "contaminated with holiness" has unfortunately fueled the flames of a so far unresolvable dispute. 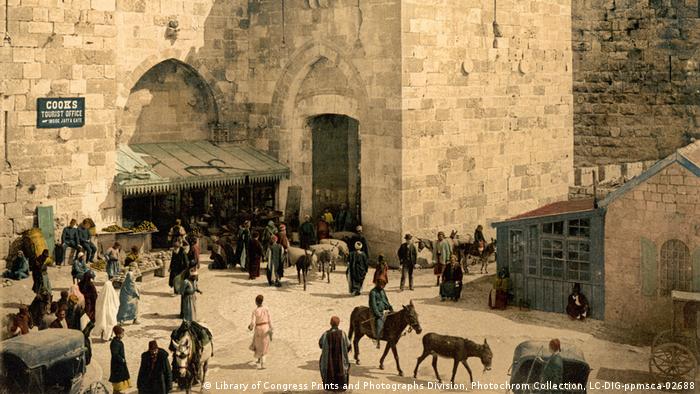 Berlin's Jewish Museum offers visitors a unique walk through the eventful history of a city that has uniquely inspired travelers from all over the world.

Among the items exhibited in 15 separate rooms are architectural models, films, artworks, as well as rare maps — some of which were freely invented by Middle Age cartographers trying to lead themselves to the worldly and heavenly Jerusalem.

"Welcome to Jerusalem" attempts to immerse the visitors in an immersive atmosphere created by visual and audio impressions experienced across three screens that show "24 Hours Jerusalem," a film by Berlin director Volker Heise.

Dozens of crews moved across different parts of Jerusalem on one day and captured a variety of scenes. Viewers find themselves in a bakery, on old cobblestones in the historic center, in modern West Jerusalem, and in a helicopter making its rounds above the city.

In between, there's a group of Swabian pilgrims singing religious songs in a travel bus, as well as pious Jewish men praying at the Wailing Wall. Even that Jewish custom has come under attack in Jerusalem, with liberal women demanding the same right to pray there, despite being rebuffed. 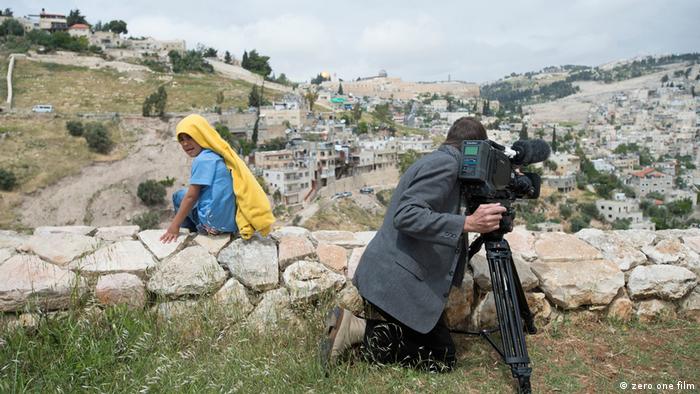 To whom belongs Jerusalem?

That question cannot be easily solved by an exhibition that has vowed to remain apolitical, even if it doesn't shy from inherent disputes. The show includes a "Conflict Room" dealing with the existing tensions and dissonances, while some other parts of the exhibition allow the three monotheistic religions of Judaism, Christianity and Islam to stand peacefully side by side, accompanied by texts in German, English and Arabic.

It doesn't come as a surprise that Judaism is at the center of the Jewish Museum's exhibition. Christianity is mainly represented by a bewildering assembly of crosses, among them numerous crosses made of olive wood by Palestinian Christians.

What seems to be lacking are references to the Crusades. According to Cilly Kugelmann, it wasn't possible to find the appropriate exhibits; such historical documents would have been vital to illustrate religious intolerance during these dark times. 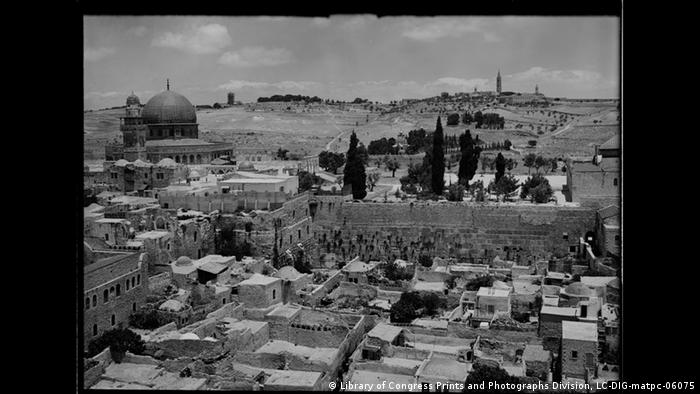 Following the conquest of Jerusalem during the First Crusade of 1099, a Christian chronicler described the blood on the streets: "Jews were kettled in a synagogue to be killed with a sword, while tens of thousands of Muslims were brutally massacred. There were piles of heads, hands and feet. Truly, this was a just ordeal, filling the place with the blood of the unfaithful. When they couldn't find any more people to be assassinated, the crusaders moved on to the Church of the Holy Sepulchre while singing their hymns. They went on to celebrate the Easter liturgy right next to Christ's tomb."

"A layer of holiness interferes with everything that occurs in this city. And the less it seems possible to find secular, conventional solutions to the conflicts, the more people focus on the metaphysical roots of the city," points out Cilly Kugelmann.

The dialogue between different population groups has remained difficult. When the organizers of "Welcome to Jerusalem" called on Palestinians to contribute documents and exhibits to the show, they were rebuffed.

"The Palestinians insist on their own version of history; they refuse to participate in an exhibition that has been organized by and with Jews," comments Cilly Kugelmann, who served as the program director of the Jewish Museum from 2002 to March 2017.

Read more: Why do women hide their hair?

There are some exceptions, though. Palestinian artist Mona Hatoum is known for her fierce criticism of Israeli occupation. But she of all people has contributed an artwork to the show. Entitled "Present Tense," it depicts what she calls "the new outlines of Palestine" on a mosaic consisting of square pieces of soap, recalling the soap production in Nablus, renowned since Antiquity and part of Palestinian cultural identity. Resulting from Israeli attacks and encroachment on the historic center of Nablus, traditional soap production there has come to a halt.

"Welcome to Jerusalem" has successfully refrained from whitewashing existing conflicts in order to post beautiful and uplifting pictures for travel agencies.

The show cannot be accused of one-sidedly ignoring viewpoints of the other side. For example, it tells the story of a Palestinian grandfather who travels to Jerusalem with a big key, pointing at a house that once belonged to his family until they were expelled in 1948. "I thought this was only a military exercise, and that we would just wait until it was over to then return to our house," relates the man.

Another exhibit refers to the controversial dress worn by far-right Israeli culture minister Miri Regev at the 2017 Cannes Film Festival. It was printed with the Jerusalem skyline, including the Al-Aqsa Mosque and the Dome of the Rock, as an explicit political statement. It led to strong reactions on social media. A cardboard reproduction of her provocative fashion choice is part of the exhibition. 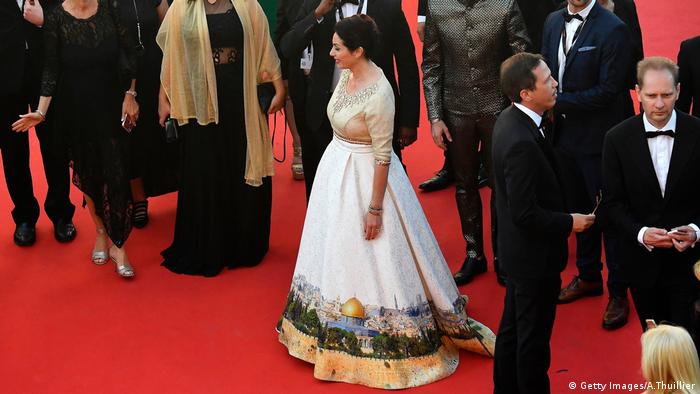 "Jerusalem of Gold": that's a slogan used for tourism marketing, selling the destination for its unique aura of holiness, its special light as described by Israeli author Amos Oz, that can unexpectedly overwhelm drivers in Jerusalem.

Travelers have also been affect by the "Jerusalem syndrome" for centuries, a psychotic state which is triggered by a visit to Jerusalem, which leads people to develop religiously themed obsessions.

A group of Jewish extremists has already founded the Temple Institute that prepares the construction of the "Third Temple." According to the Jewish faith, the Third Temple may only be constructed after Messiah's return. But some extremists are obviously trying to speed up the process.

Large funds support this movement, and it has already recreated equipment for the temple, including the Golden Menorah. The Temple Institute's ultimate goal appears to be to tear down the Haram al Sharif, the Dome of the Rock and the Al-Aqsa Mosque. Some observers even fear that, should this happen, it could trigger the outbreak of the Third World War.

The exhibition "Welcome to Jerusalem" runs through April 30, 2019 at the Jewish Museum Berlin.

Famous for designing the Jewish Museum Berlin, architect Daniel Libeskind has created more than 45 buildings worldwide. As he turns 70 on May 12, he is planning still more. Here are some of his most remarkable works. (12.05.2016)

Filmmaker Artur Brauner has donated 21 of his films to the Jewish Museum in Berlin. The Holocaust survivor was one of Germany's leading film producers in the post-war era. (07.03.2016)

Netanyahu under pressure in Europe amid Jerusalem protests