It's the renowned architect's 75th birthday — and it seems the Polish-American star hasn't slowed down one bit. His firm, Studio Daniel Libeskind, is perhaps best known for large-scale projects like Ground Zero, the former site of the Twin Towers in New York City, and Berlin's Jewish Museum. The unique shapes of his structures have made him sought after around the world.

In the last few years, his office has opened multiple projects internationally, including its first in mainland China. The Museum of Zhang ZhiDong, a spectacular twisting structure, opened in 2018 in Wuhan. His latest structures stand alongside others by equally lauded firms. Milan's new Libeskind Tower, also nicknamed "Il curvo" ("the curve") for its unique shape, is part of the CityLife project along with a building by equally famous firm, Zaha Hadid Architects. Libeskind is also designing Nexus21, an urban revitalization project of 21 structures in his hometown of Lodz, Poland.

Yet for the architect, each project is about much more than having an eye-catching structure. "Every building needs to be memorable, that's what makes it sustainable," he told DW in a recent TV interview in Berlin. "Sustainability is not just technology, but the fact that people relate to a building over a long period of time." He pointed out that buildings that tell important pieces of history, "have even more responsibility to show the past in order to have a future." 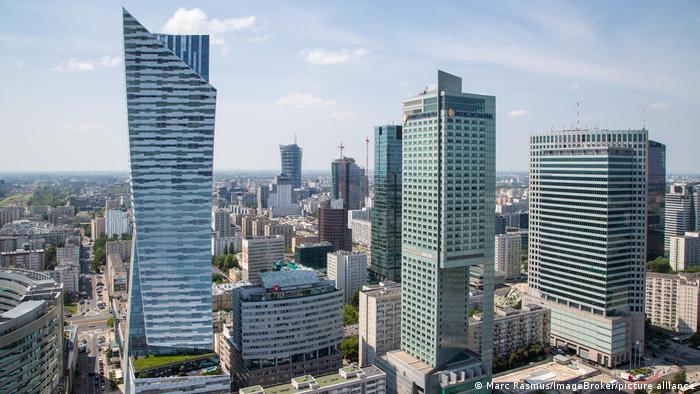 Libeskind's firm has created buildings all over the world, including in Warsaw

Libeskind is best known for designing buildings at locations that have a sad or dramatic history. One such building is his first major project, the Jewish Museum in Berlin, finished in 2001. The zinc-coated building has become a landmark of the German capital. The jagged floor plan is reminiscent of a fractured Star of David, representing the Jews who were arrested and assassinated in concentration camps during the Holocaust. 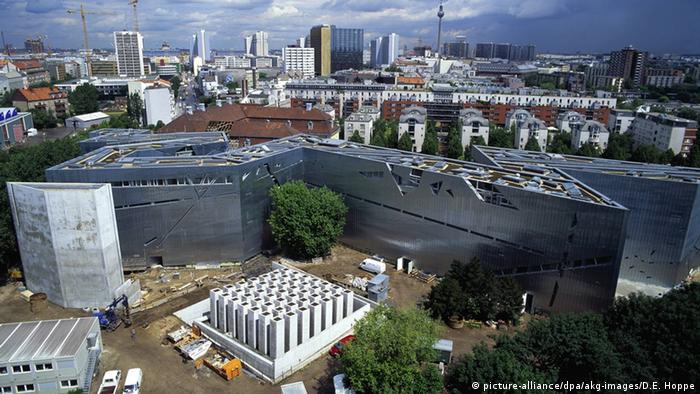 From above, the fractured Star of David design is clearly visible

Libeskind's parents were among those who were arrested, but luckily they survived the Holocaust. Libeskind was born one year after the end of the war on May 12, 1946, in the Polish city of Lodz.

In 1957, his parents emigrated to Israel before moving on to the US several years later. In an interview with the magazine Lufthansa Exclusive, Libeskind said that he continued to feel like a migrant throughout his life, just as his parents did. He added that, in his view, people have to learn that the world, and the city in which they live, is not their property, that all of us have to understand that our existence is only temporary.

Libeskind, an architect and a teacher

Following his architecture studies, Libeskind was not only involved in architectural projects but also taught as a lecturer and professor at numerous universities, among them Harvard and Yale. From 1978 to 1985, he was dean of the architectural faculty of Cranbrook Academy of Art in Bloomfield Hills, Michigan.

The famous architect has also taught at German universities such as Humboldt University, Berlin, where he received an honorary doctor's degree in 1997, and at Leuphana University, Lüneburg, for which he designed the main building. Libeskind has also received other honorary titles from other universities, among them his former university in Essex. 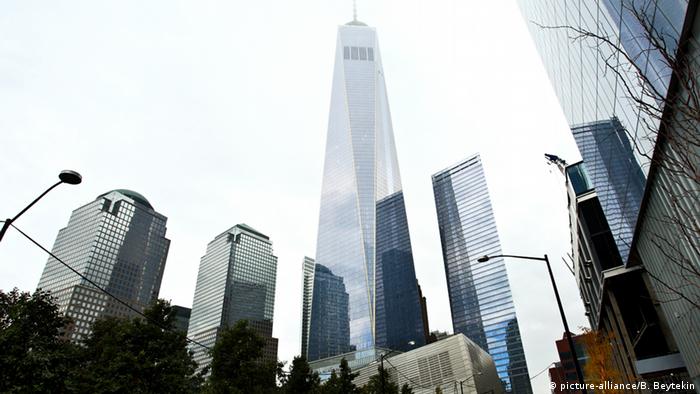 In 1989, Libeskind moved with his family to Berlin, where he based his studio, in order to start designing the Jewish Museum there. After he had been chosen in February 2003 to rebuild the area around the former World Trade Center in New York, he moved to that city, where he founded a new studio managed by his wife, Nina.

The Ground Zero project needed years to be completed. Disputes surrounding the costs of the project and the realization of Libeskind's plans, including court cases, slowed down the work.

Many claim that not much has been left of his original drafts, but Libeskind himself recognizes his own concepts, claiming that the precise location and height of the buildings, as well as the streets, follow his original drawings. For example, he had planned his Freedom Tower, now called the One World Trade Center, to be 1,776 feet (541 meters) high, symbolizing the year the US declared its independence. 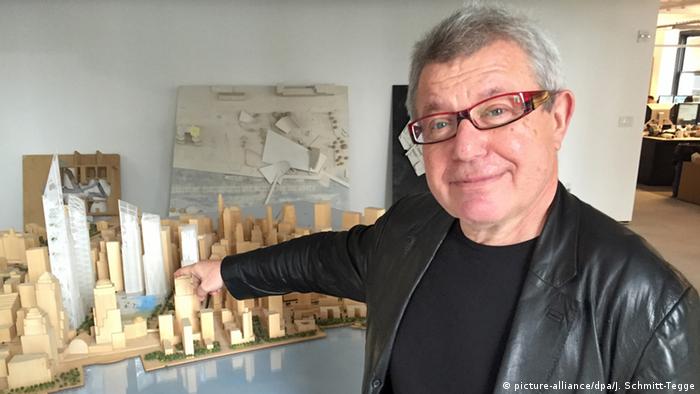 Libeskind has a studio in New York City

Symbolism in remembrance architecture, Libeskind's specialty, always tends to be controversial. In his publicly funded projects, he expresses through architectural forms the different breaks with the past, by adding modern geometrical glittering elements of steel and glass. Sharp angles and corners as well as light-flooded empty rooms are among his trademarks.

He is fascinated by the shape and characteristics of crystals, how strong they are and how they reflect the sun, as well as their symbolism. "Crystals embody beauty, warmth and intimacy," he told DW in an earlier interview. The same goes for buildings: "They have a hard structure, but the interior environments must feel like a home."

Libeskind has carried out dozens of projects worldwide. His main works include the Jewish Museum in Berlin and the Military History Museum in Dresden, the Denver Art Museum, the Keppel Bay residential towers in Singapore and the congress center in Mons, Belgium.

Looking to the future, he expects the coronavirus pandemic will have a "big impact" on architecture, firstly in the sense that social spaces will be valued more. And, secondly, in the sense that as humans, we might now understand that we "cannot exploit nature and abuse the world," as he told DW. "Now we see the Earth as fragile and I think it's good; it might make us more aware that the way we act might protect this Earth from us."

From the Jewish Museum Berlin to One World Trade Center, star architect Daniel Libeskind is renowned for designing buildings that brilliantly confront history.