World leaders have gathered to share plans on how to tackle global warming. The biggest surprise, however, wasn't a particularly ambitious climate action plan, but a pit stop by climate change skeptic Donald Trump. 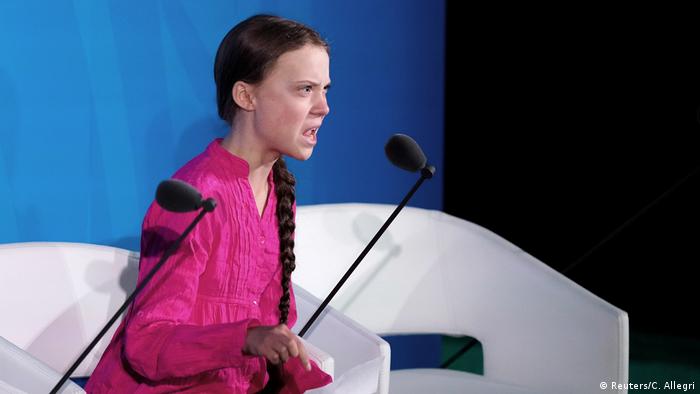 Over footage of wildfires, hurricanes and giant mountains of trash, a serious female voice talks about "humanity's impact" on the Earth and what our way of living costs the planet. It wasn't an excerpt from a brand new nature documentary, but the opening video of the Climate Action Summit that was projected on the walls of the UN General Assembly hall Monday morning.

Secretary-General Antonio Guterres had invited representatives of roughly 60 UN member states to present concrete measures and commitments their countries would take to tackle global warming. In the run-up to the meeting, Guterres had warned countries not to show up with platitudes, but rather present new and ambitious plans of action on how to reach the goals set out in the 2015 Paris climate agreement.

Heads of states as well as business leaders were to detail how their nations and corporations would keep global warming to below 2 or even 1.5 degrees Celsius over preindustrial levels.

"This is not a climate negotiating summit," Guterres stressed in his speech following the art-installation-cum-opening-video, "this is a climate action summit."

Read more: Cities are heating up. How can we keep them cool?

Many leaders complied with the instructions and came prepared with plans of how they wanted to protect their oceans, support developing countries in adapting to global warming or cut emissions.

German Chancellor Angela Merkel was among the first to speak at the more than eight-hour-long summit. Merkel said industrialized countries with their high emissions played the biggest part in creating the climate crisis and had "the obligation to put our technology, the best of our knowledge, and our finances into stopping global warming as we know it."

"Germany sees its responsibility," Merkel stressed. "We shall increase our funding for global climate protection from €2 billion to €4 billion ($4.4 billion) compared to 2014." Germany would invest €1.5 billion in the Green Climate Fund, Merkel pledged.

The chancellor also said there was no doubt that climate change was man-made and talked about the importance of listening to scientists with knowledge on the issue — a point that seemed tailor-made for a surprise guest in the audience: US President Donald Trump.

The Trump administration was supposed to be represented by a senior government official. Instead, the commander-in-chief showed up himself. Not for long, however. After listening to speeches by India's Prime Minister Narendra Modi and Merkel, Trump left to attend his own summit on religious freedom.

The visit amused summit attendees. Michael Bloomberg, the UN special envoy for climate action, got laughs and applause for his suggestion to the president.

"Hopefully our discussions here will be useful for you when you formulate climate policy," Bloomberg said.

And Jaime Henn, co-founder and strategic communications director of environmental NGO 350.org, said in an interview with DW that the president might have benefited from his time at the summit, short as it may have been.

"Who knows, maybe Trump learned something today," Henn said with a laugh. "It was better than watching Fox News, that's for sure."

Next step: Putting commitments into action

But there were emotional moments at the summit as well. Youth climate activist Greta Thunberg called the politicians and business leaders to task in an angry speech.

"This is all wrong. I shouldn't be up here. I should be back in school on the other side of the ocean," the 16-year-old said. "Yet you all come to us young people for hope. How dare you!"

She went on to say that business-as-usual would no longer be acceptable.

"We will not let you get away with this," Thunberg said. "Right here, right now is where we draw the line. The world is waking up. And change is coming, whether you like it or not."

Thunberg at UN: 'You have stolen my dreams'

The crowd enthusiastically cheered the speech by the "Fridays for Future" founder. But it's still a long way from getting swept up in the moment and laying out commitments to putting these plans into action.

"Politicians are stumbling right now trying to keep up with youth," 350.org's Henn said. "We have heard some promises today, but the question is whether they will follow through."

He compared humanity's struggle against climate change to being stuck in a hole — a tough situation, but there is a way out.

"The ladder is right down there with us!" Henn said. "It's the path outlined in the Paris agreement. We're just not using it yet."

Ahead of Monday's United Nations Climate Action Summit, young activists took to the streets and gathered at their own climate conference in New York City. Their message to world leaders: This is a climate emergency. (23.09.2019)