UN calls for EU and Italy to end migrant standoff

After a meeting with EU states failed to find a solution to Italy's migration woes, the UN asked for a deal to be made. The UN refugee agency said EU states are "in a race to the bottom" to take the least responsibility. 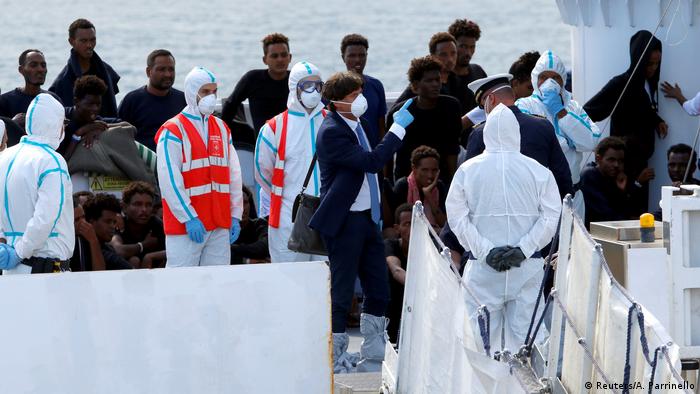 The United Nations refugee agency on Saturday called for European Union states to come to an agreement for 150 migrants who have spent more than a week confined to a rescue ship in the Sicilian port of Catania.

A meeting between a dozen EU member states in Brussels on Friday to discuss what officials said was the broader issue of the disembarkation of migrants rescued at sea failed to produce an immediate solution for the Diciotti migrants.

UN High Commissioner for Refugees Filippo Grandi encouraged member states to "urgently" take some migrants in, while calling on Italian authorities to allow the migrants to disembark in Catania in the meantime.

"The time has come to end the back-and-forth that has seen countries competing in a race to the bottom on who can take the least responsibility for people rescued at sea," Grandi said in a statement.

"It is dangerous and immoral to put the lives of refugees and asylum-seekers at risk while states engage in a political tug-of-war on long-term solutions," Grandi continued.

Italy's Interior Minister Matteo Salvini has allowed 27 minors to disembark from the Dociotti at the port of Catania but put his foot down for the remaining adults on board.

He has demanded other member states take the migrants in, going as far as threatening to withhold EU payments if assistance is not given.

German Chancellor Angela Merkel was restrained in her response to Italy's threat on Saturday, saying only that discussions over the distribution of refugees were taking place in Brussels and "all the countries are also introducing their positions."

"The European Union has decided to turn its back on Italy once again," Deputy Prime Minister Luigi Di Maio wrote on his Facebook page, adding that his country had no choice but to "take a compensatory measure in a unilateral way ... we are ready to reduce the funds that we give to the European Union."

"They want the €20 billion ($23 billion) paid by Italian citizens? Then let them demonstrate that they deserve it and that they are taking charge of a problem that we can no longer face alone. The borders of Italy are the borders of Europe," he added.

Hundreds of thousands of asylum-seekers have arrived in Italy since 2013, fleeing war, persecution and poverty in the Middle East, Africa and Asia.

The EU's Dublin Regulation states that people must seek asylum in their country of arrival, but Italy's new government has increasingly barred boats from docking at its ports.

The German government hopes its migrant return agreement with Spain, which comes into force this weekend, will just be the beginning. Unfortunately, there's little substance to the deal, says DW's Rupert Wiederwald. (11.08.2018)