Ukraine to pull troops out of disputed Crimea

Ukraine has announced plans to remove its military forces from the disputed Crimean territory. The announcement comes just hours after pro-Russian forces took control of several military bases across the peninsula. 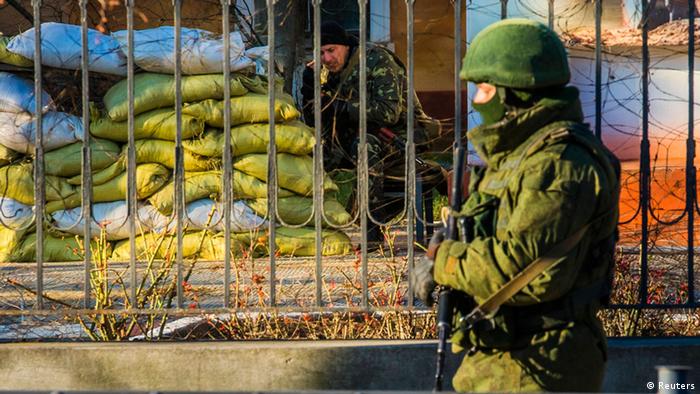 Pro-Russian military forces seized two military bases across the Crimean Peninsula on Wednesday, prompting Andriy Parubiy, secretary of Ukraine's National Security and Defense Council to announce plans for his country to hold joint military excercises with the US and Britain.

Parubiy also announced the government's plan to relocate troops from the Crimean Peninsula to Ukraine's mainland.

The country, Parubiy added, would also ask the United Nations to declare Crimea a demilitarized zone.

"The Ukrainian government will immediately appeal to the United Nations to recognize Crimea as a demilitarized zone and take necessary measures for Russian forces to leave Crimea and prepare conditions for re-deployment of Ukrainian forces," Parubiy said.

The Council also announced a plan to evacuate Ukrainian citizens who do not wish to stay in Crimea.

US Vice President JoeBiden told the leaders of Lithuania and Latvia on Wednesday that Washington would defend NATO allies against Russian aggression.

Speaking from Vilnius, Lithuania, Biden said the White House was "absolutely committed" to defending its allies, adding that "Russia cannot escape the fact that the world is changing and rejecting outright their behavior."

Referring to reports of armed attacks on Ukraine's military in Crimea, Biden said that, "as long as Russia continues on this dark path, they will face increasing political and economic isolation."

Biden, concluding a two-day trip that had previously taken him to Poland, was meeting with Lithuanian President Dalia Grybauskaite and Latvian President Andris Berzins on Wednesday. He said that, if necessary, the US and others would come to their NATO allies' defense.

"We're in this with you, together," Biden said. "We stand resolutely with our Baltic allies in support of the Ukrainian people and against Russian aggression."

Estonia, Latvia, Lithuania and Poland are all members of the European Union and the Western military alliance NATO, unlike Ukraine.

The two Baltic presidents also condemned the Kremlin's move to annex Crimea from Ukraine. The government in Washington has said it is preparing a fresh round of sanctions in response.

British Prime Minister David Cameron on Wednesday called for the current holder of the G8 presidency, Russia, to be excluded from the group. Leaders of the other G8 countries, formerly known as the G7 until Russia's inclusion in 1998, are to meet in The Hague next week after suspending plans for the annual G8 summit in Sochi.

"I think we should be discussing whether or not to expel Russia permanently from the G8 if further steps are taken," Cameron said in parliament in London.

United Nations Secretary-General Ban Ki-moon is expected to visit Russia and Ukraine in a bid to mediate between the two countries.

Ban is scheduled to hold talks with Russian President Vladmir Putin and Foreign Minister Sergei Lavrov in the capital, Moscow, on Thursday. On Friday he will meet with Ukraine's interim President Oleksandr Turchynov and interim Prime Minister Arseniy Yatsenyuk in Kyiv.

The UN said Ban's trip "is part of his diplomatic efforts to encourage all parties to resolve the current crisis peacefully."

Germany's Foreign Minister Frank-Walter Steinmeier said Wednesday the Organization for Security and Cooperation in Europe (OSCE) needed to agree on a mandate for an observer mission within the next 24 hours.

"Having a monitoring mission the week after next or next month won't do. We need it now," said Steinmeier.

With the exception of Russia, all OSCE member countries have agreed to a mission which would see around 100 experts sent to Kyiv to monitor the politicial and security situation in Crimea.

Last week, a small team of unarmed OSCE observers were prevented from entering the region by Russian military forces.

Despite opposition to the proposed mission Steinmeier said after a telephone conversation with his Russian counterpart, Sergei Lavrov, that some progress had been made, and he hoped for a resolution within the next 24 hours.

"There are about 200 of them, some wearing balaclavas. They are unarmed and no shots have been fired from our side. The officers have barricaded themselves inside the building," Ukrainian navy spokesperson Sergiy Bogdanov said.

Before noon, Ukrainian servicemen were seen leaving the headquarters. There were no reports of violence.

Crimean officials declared independence from Ukraine on Monday after the results of the March 16 referendum showed that 96.7 percent of voters wanted to join the Russian Federation. Following the decision, they also said that all remaining institutions on the Black Sea peninsula were property of the Crimean state.

German companies with investments in Russia and Ukraine are worried about how Russia will respond to the European Union's sanctions. Are they right to fear retaliation? (19.03.2014)