German companies with investments in Russia and Ukraine are worried about how Russia will respond to the European Union's sanctions. Are they right to fear retaliation? 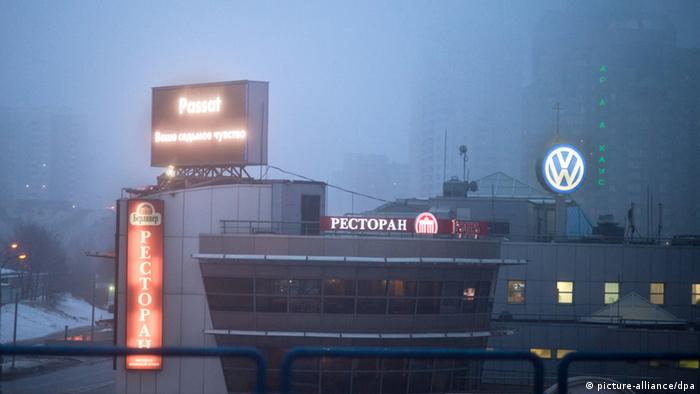 The story of Gluhvizi has made everyone nervous. A few days ago, some shady looking men turned up at the kaolinite factory in Gluhvizi, some 200 kilometers (125 miles) west of Kyiv, and said they wanted to install a representative in the management. The factory belongs to the German Quarzwerke company, which is based near Cologne.

According to Quarzwerke's boss, Otto Hieber, the Ukrainian representative was supposed to control the company and influence the distribution of wages. "It was an organization which called itself 'People's Self-Defense Committee.'"

This story ended happily: the Ukrainian workers chased the men from the factory and Hieber still has control of his subsidiary. A little further east there was a similar case - there too local gangs tried to use the political chaos to take over a German company.

The Germans are talking to each other about the problem, and medium-sized companies which have invested massively in Eastern Europe over the last few years are beginning to think about risk in rather more physical terms. 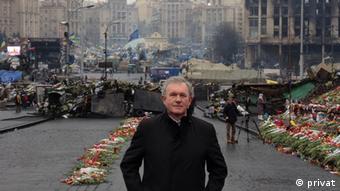 Otto Hieber has been following events in Kyiv

Peter Driessen, the head of the Chamber of Commerce and Industry for Munich, says such gang activity is merely the direct result of the crisis. He's more worried about the further sanctions threatened by the European Union: "As a response to the EU's decisions, Russia could also decide to freeze bank accounts and might even go as far as confiscating internationally active companies," he said.

Some 6,200 German companies have set up branches and subsidiaries in Russia in recent years. According to the German Federation of Industry (BDI), they've invested more than 20 billion euros ($28 billion). That would be seriously affected if sanctions were to spiral between the EU and Russia.

A week ago, the term "expropriation" was used for the first time in the Russian Federation Council. One member called for European companies to be expropriated without compensation. That may have been the idea of just one member, and it wasn't taken up - but the nightmare scenario has been raised and it's being thought about.

Big companies like Siemens or Bayer appear, at least outwardly, to be relaxed. "There's no sense in rehearsing horror scenarios," VW financial director Hans Dieter Pötsch said recently. But speaking by phone under guarantee of anonymity, managers of international companies have said that these horror scenarios are exactly what they've been rehearsing. 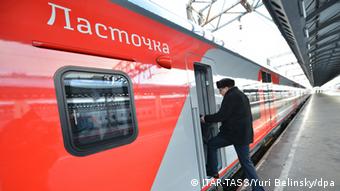 Siemens trains run in Russia, but could future projects be at risk?

"Just the fact that expropriation is being talked about leads one to prepare for it," said Driesse. "What should I do if certain suppliers from that country are no longer able to deliver?"

Michael Harms, the chairman of the Chamber of German-Russian foreign trade in Moscow, thinks that fear of expropriation is exaggerated. The Russian government, he said, has worked hard over the last 15 years to attract foreign investors to the country. It has created an excellent climate for investment with a level of legal security for foreign companies of which Russian companies can only dream. Moscow won't readily risk the trust it has built up.

All the same, the annexation of Crimea has somewhat shaken his confidence in the reliability of the Russian government. And he's convinced that Russia will not leave Western sanctions unanswered. Moscow, he thinks, will try to save face without damaging its own economy.

And that means that, as long as the EU doesn't expropriate any Russian companies, Russia won't expropriate European companies. But many medium-sized businesses see the possibility of any further escalation as a threat. Anthony Van Der Ley of the agricultural machine manufacturer Lemken complains that the crisis has already led to a collapse of the Russian currency, the ruble, and made trade much more difficult. 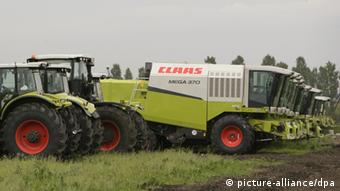 German agricultural equipment has a good reputation in Russia

"That means the Russian farmer has to pay 20 percent more for the same machine, so there are fewer orders and Russian customers are holding back," he said.

Further EU sanctions would be poison for business, he added. "If we aren't nice to them, they won't be nice to us." Van der Ley fears above all that his Russian business accounts could be frozen. "Then we'd have to pre-finance everything, and that would cost us a lot of money."

But he isn't thinking of withdrawing from the Russian market. Russian agriculture is currently going through rapid change, and there are high returns to be made in exchange for the high risk.

"We've always experienced highs and lows," he said, "but we've always found a way, because Russian farmers have a high opinion of equipment from Germany."