Ukraine has imposed a transport blockade on rebel-controlled territory after separatists seized industrial assets. The move is a dangerous escalation in the three year conflict. 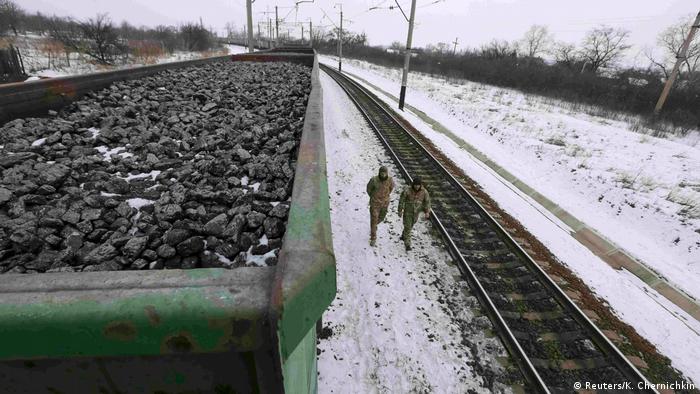 Ukraine on Wednesday announced a transport blockade on the rebel-held east of the country, escalating a political crisis that has the hurt the economy on both sides and threatened a fragile ceasefire.

The move comes after separatists confiscated dozens of strategic-Ukraine industries earlier this month in response to a rail blockade imposed by right-wing Ukrainian nationalists and war veterans since January.

"It will be in place until the occupiers return stolen Ukrainian industry to Ukrainian jurisdiction," Ukrainian President Petro Poroshenko told the country's national security council in Kyiv.

Only humanitarian deliveries by Ukrainian organizations, the United Nations and the Red Cross would be allowed to cross the contact line, the national security council said.

The decision to block all rail and road traffic heading from the east marks a dramatic reversal for Poroshenko, who had previously sought to end the nationalist blockade.

Economic links between government and rebel-held territory have largely held during three years of conflict. But the rail blockade has disrupted trade and vital coal shipments from the east to industries in territory controlled by the government.

Already facing the prospect of rolling blackouts, the central bank says economic growth could be cut by half to 1.5 percent this year if trade does not resume. Meanwhile, thousands of people on both sides could be left unemployed.

Most of the assets seized by rebels belong to the business and industrial group of the Ukraine's richest man, Rinat Akhmetov.

The blockade highlights tensions in Kyiv, where Poroshenko and Prime Minister Volodymyr Groysman's government face a backlash from the nationalist camp if they were to break the blockade.

Poroshenko told his national security council the decision "is dictated by the necessity to prevent the destabilizing of the situation in the country, which is being undermined by political operators."

Rebel leader Alexander Zakharchenko cast aside any blame on the separatists, saying the Ukrainian government's decision was "evidence of an internal power struggle in Kyiv."

"Kiev can do whatever it wants on its side of the demarcation line. We don't care. We aren't changing our position," said Zakharchenko, quoted by the Donetsk rebels' news agency.

The German government, which has played a key role in trying to find a solution to the conflict in Ukraine, also criticized Kyiv.

"From our point of view, such a decision doesn't contribute to de-escalation: quite the contrary, it tends to encourage the separatist tendencies in Donbass," Foreign Ministry spokesman Martin Schaefer said in Berlin, referring rebel-held territory.

"The danger of a military escalation is far from over," he added.

France and Germany have condemned the Kremlin's decision to accept passports issued by authorities controlled by pro-Russian rebels. Meanwhile, a new ceasefire deal is going into effect in Eastern Ukraine. (20.02.2017)