Turkish authorities have accused the Cumhuriyet editor, who has been living in Germany for the past two years, of working to "incite chaos." The warrant was tied to an investigation of protests against President Erdogan. 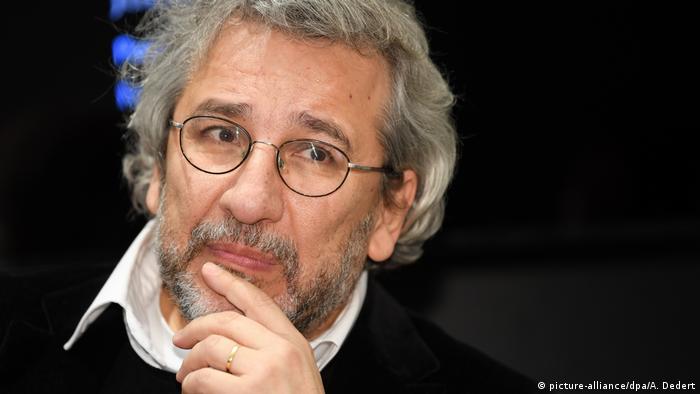 An Istanbul court on Wednesday issued an arrest warrant for Turkish journalist Can Dundar for his alleged involvement in the 2013 Gezi protests against Turkish President Recep Tayyip Erdogan, according to state-run Anadolu Agency.

The Istanbul chief prosecutor's office said he played an active role in the protests and worked to "incite chaos" and encourage "terrorists" through social media. Prosecutors also allege that Dundar was linked to Osman Kavala, a businessman and rights activist who has been in pre-trial detention for more than a year despite not being charged with a crime.

Dundar, the former editor-in-chief of opposition newspaper Cumhuriyet, was sentenced to five years in 2016 for revealing state secrets after publishing reports on alleged government arms smuggling to Syrian rebels. He was released pending appeal and has since been living in exile in Germany.

"#HepmizGezideydik We feel proud," Dundar tweeted on Wednesday, sharing Anadolu's story about his arrest warrant. The hashtag translates to: "We were all at Gezi."

It is not clear how the new arrest warrant can be served since Dundar has left the country.

Hundreds of thousands of people marched in 2013 to protest the construction of replica Ottoman barracks on Gezi Park, located in the center of Istanbul. The protests evolved into countrywide protests against the government and then Prime Minister Erdogan.

Two weeks ago, 13 people, including academics and NGO workers, were arrested as part of the Gezi investigation. Turkey has also detained tens of thousands of Erdogan's opponents in the wake of a military coup attempt in 2016.

A month before Turkish national and presidential elections, the mood in the opposition brings to mind the atmosphere of the Gezi protests five years ago, and artists, actors and writers keep fighting for change. (28.05.2018)

Germany is rolling out the red carpet for Recep Tayyip Erdogan's state visit, even as the Turkish president brazenly demands that Berlin extradite his critics. It's a preposterous state of affairs, DW's Jens Thurau says. (28.09.2018)

Turkish journalist Can Dündar and Mexican investigative journalist Anabel Hernandez both live in exile. They share their stories in a new documentary and at the Berlin premiere.