Germany is rolling out the red carpet for Recep Tayyip Erdogan's state visit, even as the Turkish president brazenly demands that Berlin extradite his critics. It's a preposterous state of affairs, DW's Jens Thurau says. 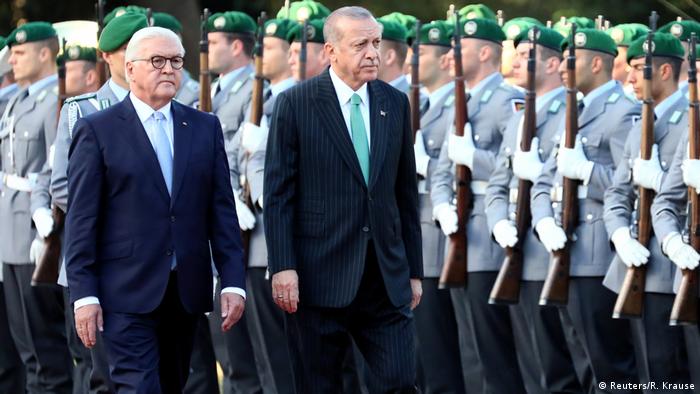 This is no ordinary state visit. Clearly, President Frank-Walter Steinmeier and Germany's government are hoping to thaw German-Turkish relations with a deliberate display of pomp and glamour in honor of Recep Tayyip Erdogan.

The Turkish president will certainly be happy to attend the banquet and receive military honors. But, despite these gestures of goodwill, Erdogan's stance remains unchanged. For months he has told his supporters in Turkey that he will never give in to German pressure, and that the authorities in Berlin are protecting enemies of his country.

Ahead of Erdogan's visit, the Turkish government submitted a list of individuals it wants Germany to extradite. Among them is well-known journalist and Erdogan critic Can Dundar, the former editor-in-chief of Cumhuriyet newspaper, who has been living in exile in Germany for more than two years. He is accused of espionage and spreading propaganda — grotesque claims. Erdogan openly threatened to cancel a joint press conference with German Chancellor Angela Merkel if Dundar attended it. Ultimately, the journalist acquiesced to calm tensions. Despite being in Germany, Erdogan was evidently allowed to pick and choose which journalists to take questions from, a truly preposterous state of affairs.

Although many Germans oppose Erdogan's state visit, the government and the Chancellery went ahead and invited him anyway. There has been a lot of talk in recent times about reorienting German foreign policy to emphasize national interests over romantic political ideals. But it remains unclear how exactly this shift will unfold.

Surveys show Germans have a clear position on Turkey and Erdogan. They want their government to engage in dialogue with Turkey, but from a distance. In light of this, Merkel's timid reaction to the outrageous extradition wish list is disappointing. Her response, like every time she finds herself in a politically awkward situation, is to try to avoid or downplay the matter altogether. And so, she promised to look into the matter. And despite the unsettling list — which nobody in the Turkish delegation even repudiated — Erdogan will attend a lavish banquet with Steinmeier, Germany's head of state. A deeply unsettling scene, to be sure.

Read more: How Erdogan fills a political gap for German-Turks

All the while, people in Berlin are bewildered by the extensive security measures in place for Erdogan's visit: snipers on roofs in the vicinity of the Chancellery and the famous Hotel Adlon Kempinski, along with numerous roadblocks throughout the city. Usually, such measures are only implemented when US presidents, British monarchs or the pope come to town. The scenes leave many wondering whether all this — a press conference, state banquet and elaborate security measures — is really appropriate for Erdogan.

There are many serious issues that Erdogan must discuss with Merkel. He needs Germany to help fix Turkey's ailing economy. So currently, it seems, the balance of power is tilted somewhat in Merkel's favor. From Germany's perspective, then, a less-pompous and more-productive state visit would have been better: None of this theater will hide the fact that Germany and Turkey are fundamentally at odds over a range of core issues. That is evident from images of Steinmeier and Erdogan standing side by side. Alas, Germany has wasted this opportunity and opted for a showy reception instead.

Uzbekistan: 'Fatalities' reported after protests in Karakalpakstan province 2h ago