Two prominent Turkish journalists have been sentenced to more than five years in jail for revealing state secrets. They published a report on alleged arms smuggling to rebels in Syria. 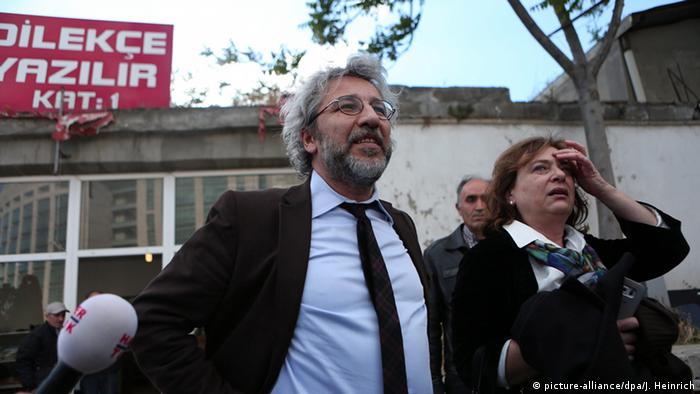 Can Dundar, editor-in-chief of the opposition "Cumhuriyet" daily, and Ankara bureau chief Erdem Gul have been sentenced to five years and ten months in jail for revealing state secrets. They published reports on alleged government arms smuggling to Syrian rebels.

However, the two men were acquitted on charges of fomenting a coup and espionage. 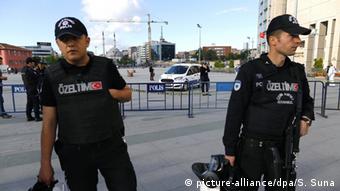 Police on guard after the court house shooting

Earlier in the day, while Dundar was giving a briefing to journalists outside the courthouse during a break in the proceedings, a gunman shot at him. Dundar was unharmed, but a television reporter covering the trial was slightly injured.

"This is the result of provocation," Dundar said moments after the shooting. "If you turn someone into so much of a target, this is what happens."

"We are now on trial for our story: for acquiring and publishing state secrets," Dundar told Reuters during a court recess, before the shooting. "This confirms journalism is on trial, making our defense easier and a conviction harder."

Dundar and Gul are expected to appeal against the verdict.

President Tayyip Erdogan was a complainant in the trial. He acknowledged that the trucks belonged to the National Intelligence Organisation and said they were carrying aid to Turkmen battling both Syrian President Bashar al-Assad and Islamic State.

With the Cumhuriyet report there was also video footage of police finding crates of weapons concealed under boxes of medicine.

The report, published in May 2015, triggered a political storm. Erdogan, claiming the video was a state secret, said in a live, television statement on the case "Whoever wrote this story will pay a heavy price for this. I will not let him go unpunished."

Two Turkish journalists are standing trial on charges of espionage and aiding a terror organization. They were detained after publishing a video purportedly showing government weapons deliveries to Syria's civil war. (25.03.2016)

Two Turkish journalists in court on controversial espionage charges have had their trial barred from the public. The decision has sparked international outrage, with reactions coming in from around the world. (26.03.2016)

Turkey's president has lashed out at foreign diplomats for attending a politically charged court hearing against two prominent journalists facing espionage and terror charges. The two men are facing life in prison. (26.03.2016)