To get to Europe, Tunisian migrants turn to 'self-smuggling'

Instead of paying human traffickers, increasing numbers of Tunisians are buying their own boats and organizing do-it-yourself ocean journeys to Europe. It appears to be a growing trend. 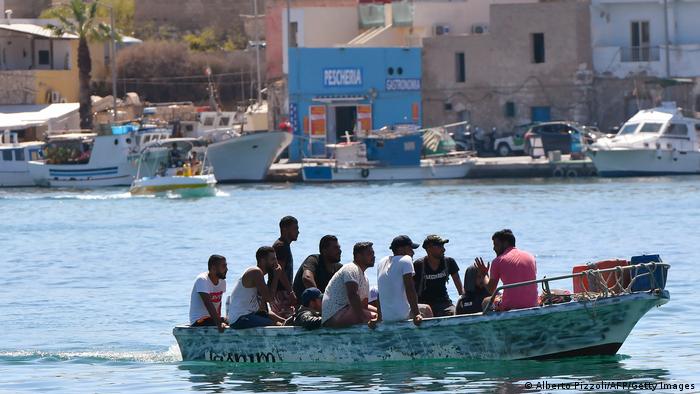 In a self-made video, posted live on Facebook, young Tunisians on the boat clattering noisily toward the Italian coastline look relaxed, as though they're on holiday.

"I salute the neighborhood of Tadhamon and my friend, Abdel-Majid," Hamoud, one of the 10 young men on the boat says, joking into the camera. He's referring to the working-class Ettadhamen neighborhood on the outskirts of Tunis. "And greetings to those who were invited to participate in this trip but refused," he continues wryly.

The rest of the passengers laugh in response.

"Goodbye to everyone in Tunisia," one of the three young women on the boat says. "Goodbye to the 24 provinces, with all my heart."

"All I want to do now is to get there," another of the young men adds wistfully.

The video, posted on Facebook, is not the only one of its kind. There are plenty of examples on social media of young Tunisians in boats — likely unemployed, fed up with their country's political chaos, and trying to get to Europe where they hope to make a better life for themselves. The locals call the passage "harraga," or "burning" through to Italy.

But what is special about this video is that the youths involved know each other, come from the same neighborhood and appear to have organized themselves. In other words, they are "self-smuggling" — a growing trend.

Self-smuggling describes exactly what it seems: Instead of paying a human trafficker to get you to Europe, you'd organize your own journey. Self-smugglers usually have a common social background — coming from the same neighborhood or perhaps an extended family. They pool their funds to buy a boat, a motor and diesel — and if they can afford it, a GPS unit.

An unhappier example of self-smuggling on YouTube shows Raouf al-Hawij and his family aboard a boat, surrounding al-Hawij's sick son. After saving money and collecting donations, the family bought a small boat and a motor and, traveling all together, left the coastal Tunisian city of Chebba to try and reach Italy.

The family was turned around by the Tunisian coastguard and al-Hawij posted the video on YouTube in order to bring light to the happenings and put pressure on the Tunisian authorities.

"All I want to do is take care of myself and my children," he said in the video.

According to research by Tunisian human rights organizations and other groups, the number of self-smugglers leaving Tunisia has been increasing.

"Self-smuggling is common along the Mediterranean cost," said Matt Herbert, who specializes in North Africa and irregular migration and is a research manager at the Global Initiative Against Transnational Organized Crime.

It's rare in Libya, where people-smuggling networks dominate, but does exist on the coasts of Morocco and Algeria, Herbert explained.

However, until the past two years, it hadn't been particularly noticeable in Tunisia. "It's now come along with the much broader rise in irregular migration we saw from Tunisians in 2020."

"Self-smuggling has become an increasingly important part of that," Herbert told DW.

Because some of the self-smuggling Tunisians may have made it into Europe undetected and others who may be planning their journey won't speak to journalists or researchers, nobody knows exactly how many Tunisians choose do-it-yourself migration. However, it is clear that irregular migration from North Africa toward Europe has increased substantially over the past year. 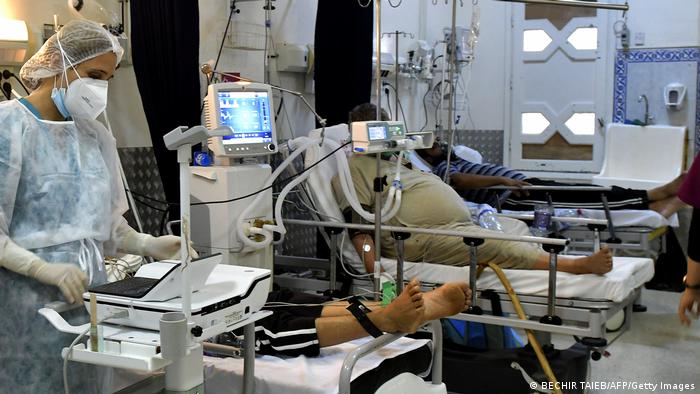 Between January and August 2020, Italy disembarked close to 15,000 irregular migrants. Over the same period this year, the Italian government says it has intercepted more than 31,000 people (up to August 9).

The International Organization for Migration, part of the United Nations, reports that of all irregular migrants arriving in Italy, Tunisians have been the largest group in 2021 so far. Between January and March, they made up 15% of all arrivals; between April and June, 14%. And most of the migrants who leave Tunisia by sea are locals, not foreigners.

It is only more recently that departures from Tunisia began to pick up again, Herbert said, explaining that this was due to the devaluation of the Tunisian dinar in 2017, rising unemployment, the country's political problems and then finally, the devastating impact of the COVID-19 pandemic. 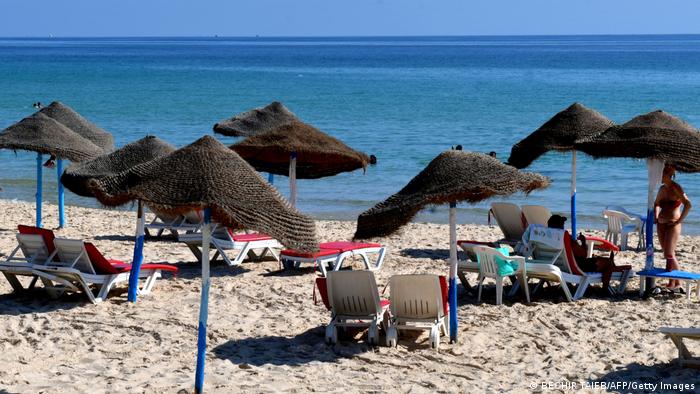 The lack of tourism itself may well be one of the reasons why there's more self-smuggling: The tourism sector is concentrated along the coasts, which were somewhat buffered from the country's economic chaos, Herbert explained.

But the pandemic has changed all that, Herbert continued. Self-smugglers often originate from coastal communities because they already have some maritime experience — for example from fishing, working on boats or sailing — and therefore feel more confident about making the crossing themselves.

Other factors also come into play for the increase in self-smuggling among Tunisians — despite the fact that it usually ends up being slightly more expensive.

Researchers report that going with a professional human trafficker costs between €1,200 and €2,200 ($1,025 and $2,600) on an ordinary boat, whereas self-smugglers split the costs of whatever equipment they must purchase. 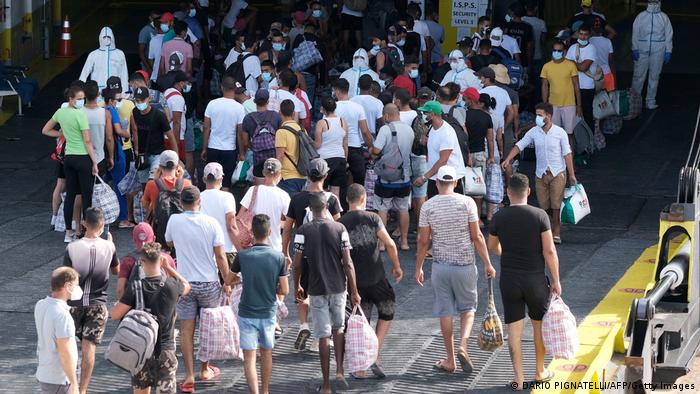 The self-smugglers are willing to pay more because it's seen as a safer option, explained Romdhane Ben Amor, spokesperson for the Tunisian Forum for Social and Economic Rights.

"Many young people here don't trust the human traffickers. Many of the traffickers work with the police. They'll take the migrants' money, gather them together, and then turn them over the police. But this way, they [the self-smugglers] can prepare for the journey almost undetected."

The self-smugglers are also well aware that professional human-traffickers care more about profit than them.

For example, to cut costs, human traffickers might not put enough diesel in a boat to get it all the way to its destination, or they'll load the boat up with too many people, Ben Amor added.

The self-smugglers often also try to land their boats in areas other than those used by professional traffickers, so they have a better chance of not being caught by the authorities and deported, Ben Amor said.

Many make their way to the larger Italian island of Sicily where it's easier to land undetected, while a number of professionally trafficked migrants end up on the smaller, closer island of Lampedusa. 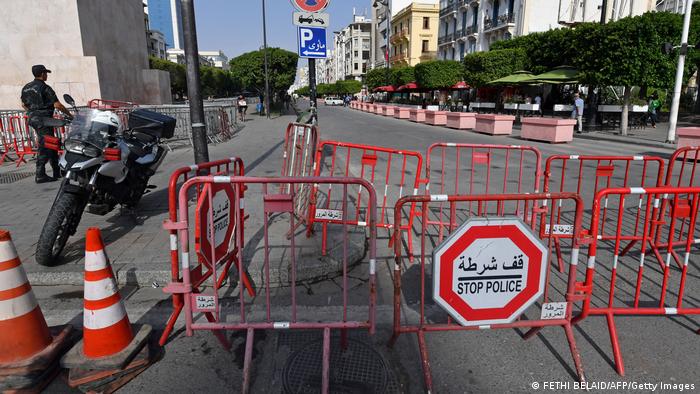 "What self-smugglers are doing is technically legal up to the point where they leave their territorial waters," Herbert pointed out. "Things like buying a boat, buying a motor or buying a GPS unit are not illegal — and, in the maritime community, it's not even particularly abnormal."

In many ways, the fact that self-smugglers are not as visible is also exactly why more attention should be paid to them, experts argue.

"There are a lot of policy considerations and a lot of money being spent by the EU and member states in North Africa based on the presumption that we need a securitized approach to fight human smuggling," Herbert said, referring to the fact that most of the focus in this area is on "professional" people-smuggling networks such as those operating out of Libya.

"There's the presumption that if these are sufficiently suppressed by security forces, then the problem goes away. Unfortunately, that's never been the reality."

It would be much more important for nations that are seeking to address the issue of irregular migration to look at the underlying drivers, Herbert said, especially given the political insecurity in Tunisia at the moment.

"What are the dynamics that are leading people on, say, the coast of Tunisia, or Algeria or Morocco, to leave their homes?"

Study: Media, migration and displacement in the Middle East and North Africa

DW Akademie commissioned field studies in six Middle Eastern and Northern African countries  in 2019/20 to understand the communication challenges posed by migration and displacement. Available in English and French.