A top EU commissioner is visiting Tunisia in the hope of striking a deal to reduce migrant sea-crossings. The EU also wants to move migrants from Italy to other member states. 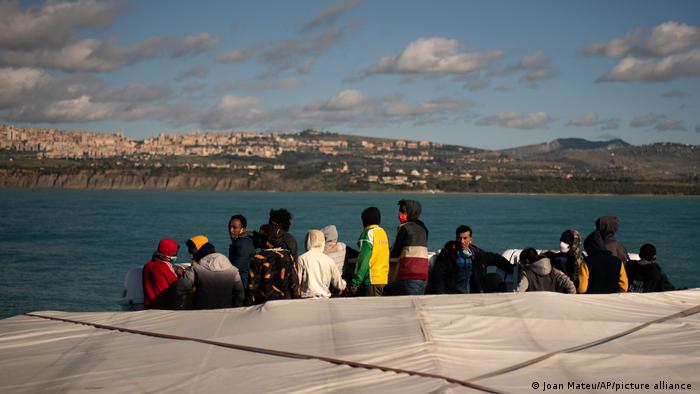 The European Commission is in talks with EU member states, as well as Libya and Tunisia, over ways to ease the number of migrants stuck in Italy, the Italian newspaper La Repubblica reported on Thursday.

Home Affairs Commissioner Ylva Johansson told the Italian daily that the Commission was looking for a quick agreement on the voluntary redistribution of migrants in Italy to other member states.

"I am in contact with governments to set up a network of voluntary aid, of voluntary redistribution that can help Italy throughout the summer months until we approve the EU reform," Johansson said.

What is the EU discussing with Libya and Tunisia?

The commissioner also said she was hopeful that the EU could reach a deal with Tunisia to provide economic support in exchange for a commitment for Tunis to manage its borders.

She tweeted on Thursday that she was in Tunisia with the Italian interior minister for talks.

"The EU must work with partner countries to reduce irregular departures, manage migration and examine reasons that cause, particularly economic consequences of pandemic," the Tweet read.

She told La Repubblica that an agreement would provide Tunis with "the resources to fight human traffickers" and for Tunisian authorities to "engage in managing the broders, to take back their citizens who have left for Europe and to repatriate foreigners in their country who are not refugees."

The EU official also told the newspaper that she was open to talks with Libyan Prime Minister Abdulhamid Dbeibah over a new migration accord and was confident one could be reached before Libyan elections in December.

"We have very positive feedback from the interim government, there are chances of working well with Tripoli," she said.

Fewer than 23,500 people have managed to cross the Mediterranean and reach Europe this year, the UN's refugee agency UNHCR said.

Most of the migrants set off from Tunisia or Algeria and land in Italy or Spain.

Libya — which is suffering an ongoing conflict and has seen frequent abuses of migrants — is a major route for people fleeing regions in Africa and Asia who are hoping to find shelter in Europe.

The UNHCR estimates that 633 people have died or gone missing while attempting to cross the sea this year so far.

The bloc's plans are part of a larger reform package on migration. The strategy includes smoother legal procedures to deport the rejected migrants and the use of visa restrictions to convince countries to take them back.