5 EU states urge others to take in more migrants

Ministers from Cyprus, Greece, Italy, Malta and Spain have met in Athens to call for changes to the EU's pact on migration and asylum. They pushed for an EU-wide repatriation mechanism. 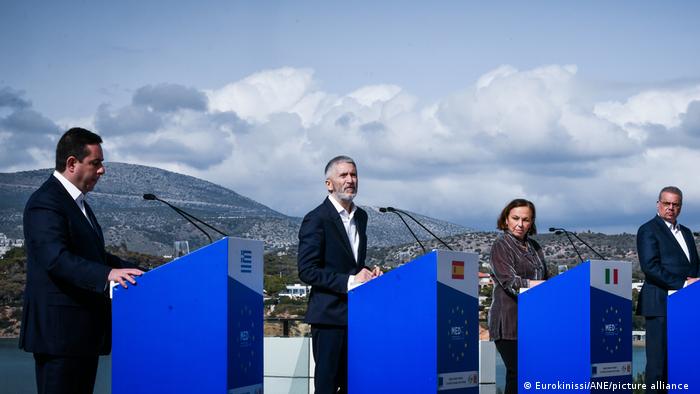 Southern European countries on Saturday presented a united front at a meeting in Athens, calling on other EU states to share the migration burden.

Greece, Cyprus, Italy, Malta and Spain took part in the talks ahead of an EU summit later this week which is expected tofocus on EU-Turkey relations. The five EU members have extensive Mediterranean coastlines and are the most common targets for migrants from North Africa and the Middle East.

"We can no longer be punished for our geographical position,'' Malta's Home Affairs Minister Byron Camilleri said.

Turkey, which hosts more than 3.5 million Syrian refugees, agreed to take back migrants not entitled to EU protection in return for billions of euros in aid.

But migrant groups say the pact signed with Brussels in 2016 has serious flaws. The EU is planning to reform the deal.

How are the southern EU states pressuring Brussels?

The southern European countries have borne the brunt of arriving asylum-seekers hoping to enter the EU.

Most Europe-bound migrants traverse  dangerous smuggling routes by boat either from the Turkish coast to nearby Greek islands or across the Mediterranean from North Africa.

Many of them are then housed in makeshift camps throughout the bloc. Last year, the five countries created the "MED 5" group in an effort to present a united front and influence revisions to the EU-Turkey migrant pact.

Their demands are: better cooperation with migrant origin countries in Africa, the Middle East and South Asia; greater willingness by other EU states to accept newly arrived migrants; and a centralized European repatriation mechanism overseen by Brussels.

"We repeat our strong plea in favor of a needed true balance between solidarity and responsibility as in its current format the Pact does not provide sufficient reassurances to the frontline Member States", a common statement from the five countries said on Saturday.

What was said about Turkey?

The ministers also discussed whether Turkey played an active role in pushing migrants toward Europe in contravention of the EU pact.

At one point last year, Turkey's president said his government would no longer discourage migrants from trying to cross the border into Greece.

The ministers who met at a hotel in Vouliagmeni, a seaside suburb of Athens, were joined by the vice-president of the European Commission, Margaritis Schinas, who is a Greek national. Greek Prime Minister Kyriakos Mitsotakis also attended the meet.

The European Commission, the EU's executive arm, wants to overhaul the rules so that the asylum-seekers are shared out across the 27 member countries.

A new pact was put forward last September but a final deal has yet to be reached.

The right-wing nationalist governments of Poland and Hungary oppose the plan, despite the offer of €10,000 per adult taken in.

The new pact proposes that those Eastern European states that don't want to take in migrants contribute funds instead to help those that do.

Is Frontex involved in illegal 'pushbacks' in the Balkans?

Though some countries in the EU have decriminalized cannabis, the island nation is the first to legalize recreational use and cultivation for adults. Germany and Luxembourg are expected to follow suit early next year.