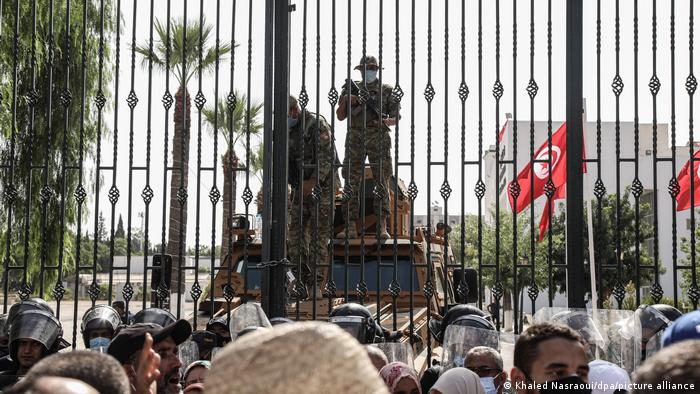 Tunisian President Kais Saied had barely announced his decision to dismiss Prime Minister Hichem Mechichi and freeze parliament for 30 days when he began justifying it on Sunday evening, arguing that he had acted in accordance with the constitution.

The president, a lawyer, said he based his decision on Article 80 of the Tunisian constitution, which grants the president the right to take extraordinary measures if there is imminent "grave danger to the unity, security and independence of the country." He added that, also in accordance with the constitution, he contacted the heads of key state institutions — including the head of government and the head of parliament, Hichem Mechichi and Rachid al-Ghannouchi respectively — before making the move.

The president's statement did not go unchallenged for long. On the same Sunday evening, Ghannouchi, who is also the chairman of the moderate Islamist Ennahda party, said that he had not been consulted and that there was no state emergency. In remarks carried by The Associated Press, Ghannouchi said that the president had carried out "a coup against the constitution and the (Arab Spring) revolution."

Sana Ben Achour, a Tunisian lawyer, takes a similar view. Last Sunday was a "black day" in Tunisia's history, he told DW, adding that the president had turned the constitution against himself. "What he says about Article 80 is nothing but his own interpretation," Ben Achour said. Tunisia, he said, is in danger of shifting toward a dictatorship.

But law professor Rabeh Kraifi is of the opposite opinion. He pointed out to Reuters news agency that Tunisia's constitutional judges have not yet been elected. "In the absence of the constitutional court the president has the exclusive right of interpretation," he said, saying that the decision was legally valid.

The dispute over the constitutionality of the president's decision shows, above all, how much pressure the recent political crisis has put on everyone involved. In particular, this applies to the president, who has by no means been able to convince all Tunisians of the legality of his decision. Mainly, it's his supporters who want to believe him — the people who protested against the government in several parts of the country over the past few days, demanding the resignation of the government and the dissolution of parliament.

In fact, at this time the dispute is the culmination of a long-running power struggle between the president and the prime minister and head of parliament on the other, says Johannes Kadura, head of the Tunisia branch office of the Friedrich Ebert Foundation. The quarrel has led to a political stalemate in Tunisia that the economically fragile country can ill afford, he told DW. 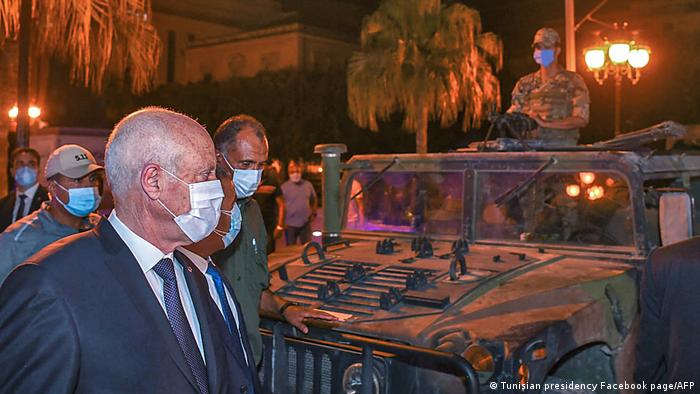 Infighting at the top

Tensions started building at the beginning of this year. In January, President Saied refused to endorse ministers named by Prime Minister Mechichi as part of a cabinet reshuffle. Saied's office said the president could not approve their appointment because the candidates were suspected of corruption and had strong conflicts of interest because of other positions they held.

At the time, the Tunisian media speculated that Saied objected largely to safeguard his own power. In their account, the president saw the Cabinet reshuffle primarily as an attempt by Mechichi to replace ministers who were close to the president with those who were more closely linked to the prime minister.

The extent to which the president's decision is driven by power struggles between the parties is demonstrated by the way Qatar-based broadcaster Al-Jazeera's offices in Tunis were shut down on Monday by heavily armed police officers, as the station itself reported. Qatar is considered one of the most important supporters of the Muslim Brotherhood — with which the Ennahda party is also loosely affiliated. According to press reports, Ennahda has also benefited from Qatari aid. 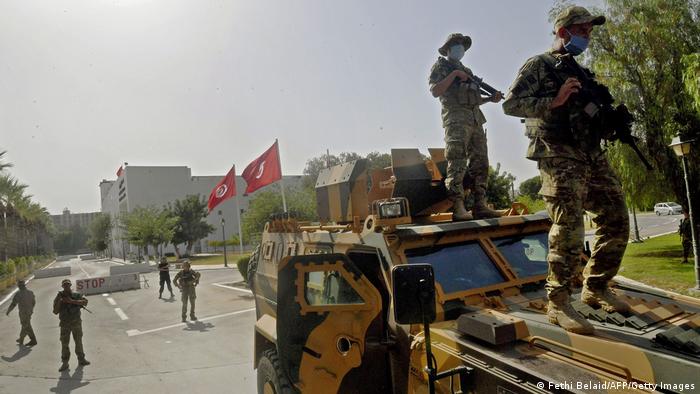 Military forces guarded the area around parliament on Monday

But what really triggered the current crisis is the long-standing economic situation, says Johannes Kadura. "Economic circumstances have not improved for the people since the 2011 revolution; there is a lot of disappointment that is finding an expression in politics."

The uprisings that gripped large parts of the Arab world in 2011 started in Tunisia, where they ultimately led to the ouster of the autocratic president, Zine al-Abidine Ben Ali. The protests rapidly spread to other countries and led to the fall of the leaders in Libya and Egypt. However, many Tunisians have found that their living conditions have not improved since that year of upheaval.

On the contrary, economic development is continuing its downward trend. National debt is at about 84%, more than ever before, according to Germany Trade and Invest (gtai), a business information company. Unemployment has officially surpassed 17%, but estimates suggest it is much higher, especially among young people. A program for structural reform with the International Monetary Fund (IMF) has been announced, but it has not yet been completed.

These developments all led to parts of the population feeling increasingly wary of state institutions even before the coronavirus pandemic hit. Some young Tunisians are turning to extremist groups, while others try to head to Europe or elsewhere in the world. Still others engage in violent forms of protest. But Tunisians are united by their outrage at widespread corruption and smuggling — according to various estimates, the loss of revenue they cause amounts to more than 50 % of the gross domestic product. 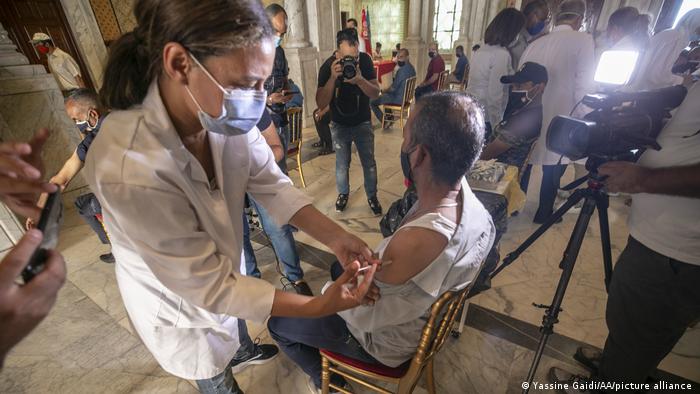 The vaccination rollout in Tunisia has been relatively slow

And now, the coronavirus pandemic has hit the country hard, too. According to Johns Hopkins University, about 573,000 people have been infected with the virus and 18,800 have died (as of July 27, 2021). About 7% of the population are fully vaccinated.

At the beginning of May, a doctor from the Tunisian Association of Young Doctors told DW that Tunisia was fighting the third wave of COVID-19 with very limited resources and spoke of "a situation like in a war." The Tunis hospital she works at had few beds and the admission wards for COVID patients were full, Omaima El Hassani said. She and many of her colleagues warned of a collapse of the health care system, calling the situation exceedingly difficult. "Patients often wait more than 24 hours for a free bed," she said.

Such developments are driving popular discontent, says Johannes Kadura, adding that it is difficult to say how the crisis will continue. "In the short term, it depends on how the two groups will mobilize their supporters. If things go to an extreme, the country could sink into chaos as a result of the political dispute," he said. But that was not inevitable: "It depends a lot on how the two sides' supporters behave." The security forces also played a decisive role, according to Kadura.

"In developed countries, political crises are resolved based on the law," he wrote on Facebook. "We have taken an enormous step backward," he wrote, adding: "We are moving toward dictatorship."

The European Union has urged Tunisian President Kais Saied to return stability to the country as soon as possible. Ousted Prime Minister Hichem Michechi has made his first comments since his dismissal.