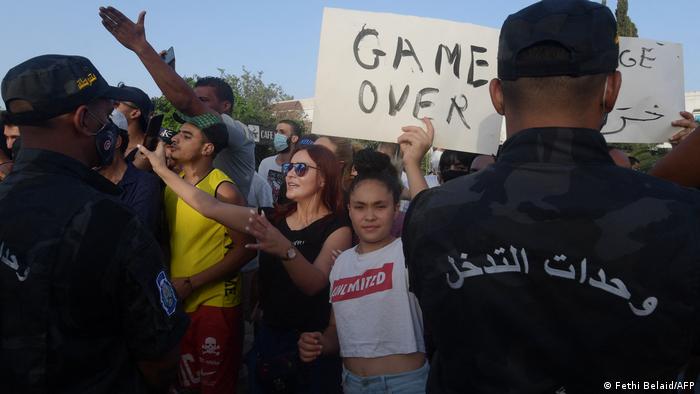 In a cloak-and-dagger operation, Tunisian President Kais Saied has dismissed his country's prime minister, Hichem Mechichi, and seized the reins of government himself, at least for the time being. Parliament has been suspended, and the parliament building is surrounded with soldiers. Is this a coup?

That's what the fired members of the Ennahda party, led by parliamentary speaker Rached Ghannouchi, are calling it. Ennahda is an Islamist party, relatively moderate by regional standards, and it holds the majority in the parliament that has just been suspended.

Saied, meanwhile, a lawyer and staunch secularist, sees his intervention as being entirely in accordance with the constitution. He has presented the disempowerment of parliament, prime minister and at least two ministers as a sort of inevitable but temporary political emergency brake, applied as a way to salvage stability in the struggling country.

The next weeks, days, perhaps even hours could show which side is right.

The situation in the country is extremely tense. At any moment, even minor outbreaks of violence or street battles, near the parliament building in Tunis, for example, could set in motion uncontrollable dynamics and perhaps even spark a nationwide escalation. What is apparent is that Tunisia's stability and its democratic system are in grave danger.

The opposing camps are irreconcilable, not only at the political level but also on the streets. While some have condemned the "coup" and publicly sworn to defend the "revolution," others have set off fireworks and honked their horns to express joy at the ousting of the Ennahda-backed government, which they accuse of completely failing to deal with either the economic crisis or the COVID-19 pandemic. It's no secret that many Tunisians were enraged by shocking reports about disastrous conditions in Tunisian hospitals and a soaring death toll, and that these had sparked violent protests.

But if the political situation in the country now also spirals out of control, it could lead to an even harsher intervention by security forces, very quickly ushering in the de facto end of Tunisia's entire democratic experiment.

In any case, many powerful Arab partner countries in the region would prefer Tunisia to have an authoritarian pseudo-democracy, along Egyptian lines. The sole success of the Arab Spring protests would then ultimately have failed in the very place where it once began so promisingly in 2011, and where it led to greater democratic success than in any other country in the region. All this is now in danger of being squandered.

'Hang the Greens' posters must be removed, German court rules 5h ago

Opinion: How real is the threat of Taliban infighting? 14h ago