Hospitals are full, oxygen supplies are low, doctors are exhausted and locals don't trust the government. Why is Tunisia the worst affected country in North Africa? 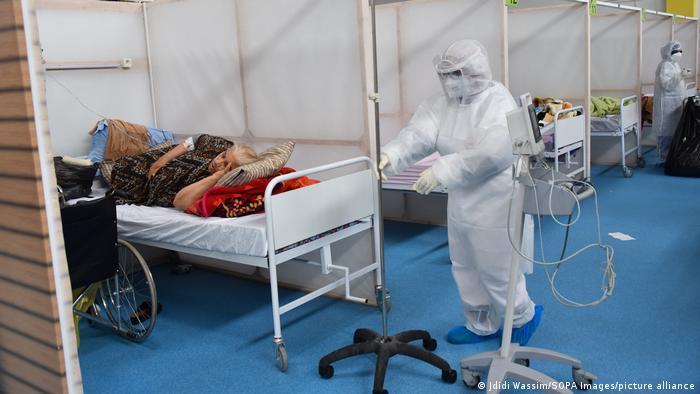 The video, filmed this week in an emergency waiting room in a Tunisian hospital, is only 12 seconds long. But it shows just how much strain the Tunisian health care system is currently under, as the country is battered by a third wave of the COVID-19 pandemic. The video, which cannot be shown for reasons of patient privacy, was sent to DW by a concerned Tunisian doctor.

Every surface in the waiting room is covered. Three Tunisians sit upright on a concrete bench, a fourth is curled up at its edge. Directly opposite, less than a meter away, three other people lie on the tiled floor. Another patient lies on top of a cupboard and two more locals lie on stretchers in the far corner. All of the people visible in the video have oxygen masks strapped to their faces. All of them have COVID-19.

Tunisia once had some of the lowest rates of infection in the world, but has more recently seen a major upsurge in COVID-19 cases. During February and March the country was seeing around 500 new infections a day, according to official numbers. Since mid-April, seven-day averages for new infections have registered at between 1,500 to 2,000 new infections daily. It is also highly likely that case numbers are underreported.

'Beginning of a disaster'

Both of the so-called British and Indian variants of COVID-19 have been found in the country. These are thought to be more contagious and potentially also more dangerous for younger patients.

The rest of the world thinks that Tunisia handled the first and second waves of the pandemic well, Omaima al-Hassani, a third-year resident doctor and member of the Tunisian Association of Young Physicians, told DW. "But in hospitals here, doctors and health professionals realized that it was just the beginning of a disaster," she said.

Her own organization and others have published multiple warnings that they say authorities ignored. They have advocated for the renovation of emergency departments, more intensive care beds as well as better pay and working conditions. Some doctors have said they were threatened for being critical.

In an open letter published in November, senior doctors complained about a lack of planning and information. "The various bodies of the Ministry of Health develop strategies, programs and plans which do not sufficiently take into account the reality on the ground and only marginally involve front-line professionals," said the 26 signatories, who included two former ministers of health. 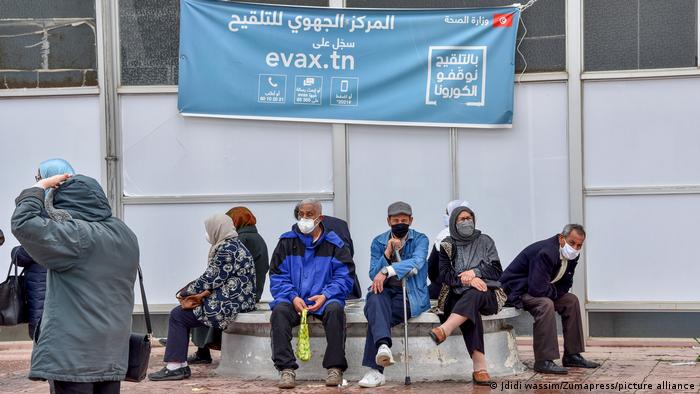 People are being vaccinated, such as here in Tunis, but the campaign has been slow to get started

This week doctors, dentists and pharmacists working in Tunisia's public sector went on strike for three days, from Monday to Wednesday, in protest at working conditions and pay.

The Tunisian Health Ministry put out a statement criticizing the medical personnel for deciding to strike in the middle of a pandemic. Some of the doctors responded that the health crisis has been so badly managed, that three days won't make any difference.

Tunisia only received its first batch of vaccines around mid-March from the COVAX scheme and although the vaccine rollout has started, it is moving slowly.

Doctors like al-Hassani have more pressing worries at the moment anyway. "It may be hard to believe," she said, "but this situation is like a war."

'Conditions for patients are inhumane'

Doctors and nurses don't have the necessary protective clothing and there is a shortage of sterilization equipment. Staff are working up to 30 hours without a break, and they risk infecting themselves and their families, al-Hassani said. Public hospitals can't take any more COVID-19 patients and have started turning people away. Even wealthier, better-equipped private clinics are almost full in some areas. 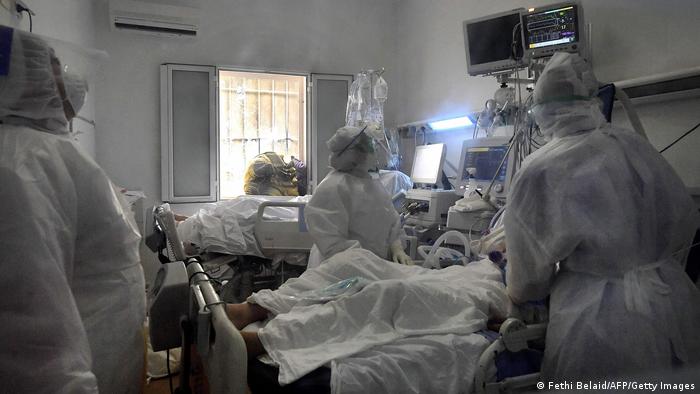 "The conditions for patients are inhumane," al-Hassani said. "They are forced to stay in the emergency departments, sitting or lying on the floor, often for more than 24 hours, while they wait for a bed to become vacant," she added, confirming the scenes from the video.

And now, some hospitals are running out of oxygen. Local media have reported that patients were forced to evacuate from a hospital in the southeastern port city of Sfax late last week.

At the start of the pandemic Tunisia was praised for its pandemic management. It has one of the most advanced health systems in the region.

So why is Tunisia faring so badly in this third wave? Doctors' associations, including the Tunisian Association of Young Physicians, say it's partially because state health budgets have been cut so much over the past few years.

There are other reasons, too. The Tunisian government has not acted with any great consistency, said Henrik Meyer, who heads the Tunis office of Germany's Friedrich Ebert Foundation, and people here don't have much confidence in them. 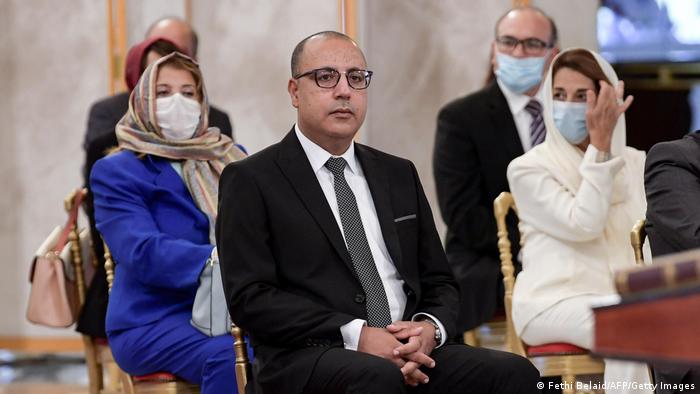 Last September, Tunisia swore in its third government in just under a year, and it's ninth since the 2011 Arab Spring uprisings that toppled the country's dictatorship. The country has had three different health ministers since the pandemic began.

Under ongoing economic stress and electoral pressure from populist hard-liners, the new leadership has often taken a more cautious, softer position on pandemic rules. The Tunisian economy was expected to shrink by around 7% by the end of last year and there have been violent demonstrations due to growing unemployment and the the economic situation.

"Tunisia could hardly afford the first lockdown," said Meyer. "Around 20% of Tunisians make a living from tourism. If that ceases, their incomes are lost. That is why the government refrained from taking precautionary measures in autumn last year and allowed tourists to enter the country without a [COVID-19] test."

The United Nation's International Labor Office believes that just over half of working-age Tunisians are employed in the informal economy — that is, they don't pay tax and tend to be self-employed, doing things like driving taxis or selling vegetables. "And this makes these people very vulnerable " suggests a Tunis local, Abdelhamid Jouini, who works as development engineer. "That's why, from their point of view, they have little reason to support the government's course." 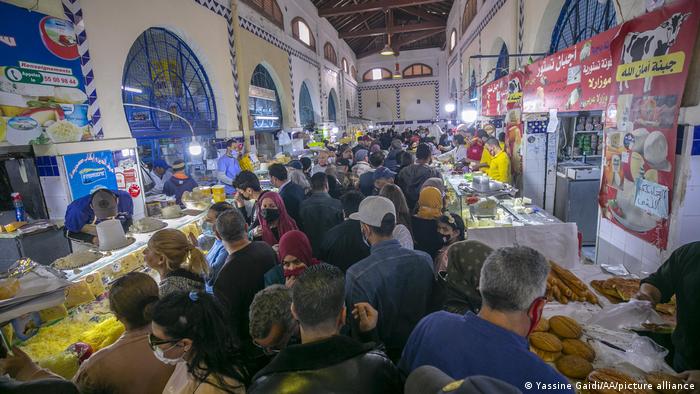 During Ramadan, many Tunisians have been less strict when it comes to physical distancing and hygiene rules

A telephone survey of over 1,000 locals conducted in February confirmed all this. It found that support for pandemic-related restrictions had fallen over the past few months, along with support for the government's handling of the crisis. This was down to 46% in February, compared to 61% the previous August.

Misinformation, vaccine hesitancy and low perceptions of personal risk also play a role. Tunisia has some of the highest vaccine hesitancy in the region: only 35% say they will get vaccinated when possible.  Additionally, while almost two thirds of respondents said they thought COVID-19 would affect their fellow citizens, only 22% thought they might be at high risk of actually catching the virus.

Tunisia to get second new government in six months

PM designate Hichem Mechichi has announced his cabinet and pledged to focus on reviving a flagging economy. However, coalition party Ennahdha is unhappy at being sidelined during the formation of the new government.