A spat among Tunisia's president, prime minister and parliament has brought the government to a grinding halt as the country battles COVID and an economic recession. 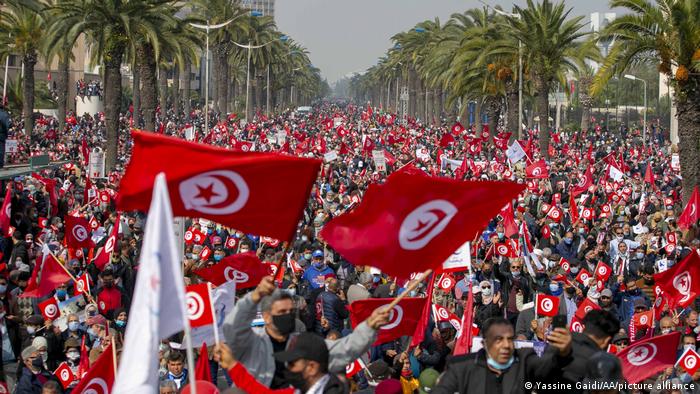 Supporters of the Islamic conservative Ennahdha party took to the streets of the capital, Tunis, on Saturday to throw their weight behind the ruling party in its ongoing feud with President Kais Saied.

The Islamist-inspired Ennahdha party called for the protest after the president criticized a Cabinet shuffle carried out by Prime Minister Hichem Mechichi in mid-January and supported by the parliament. Saied claimed that some new ministers were under suspicion of corruption and conflicts of interest.

The protest was called for as a "march for the defense of democratic institutions" and aimed at strengthening the prime minister's hand after Saied threatened to block some ministerial appointments.

"We have a parliamentary system and it is not up to the president to decide who will govern," protester Mohamed Khlif told the AFP news agency. "Democracy and the constitution must be respected."

Political processes in a jam

Ennahdha is the largest party in Tunisia's parliament, but rules in a coalition government — it has dominated the political scene in the country since the 2011 uprising which ousted the former longtime leader Zine El Abidine Ben Ali.

Party leader Rached Ghannouchi spoke at the protest, calling for an open dialogue to work towards uniting the various political factions.

Saturday's demonstration showed that the party "could still mobilize in large numbers," despite its waning support in recent years, allowing Ennahdha to "come to the negotiating table strengthened by this visible support," analyst Youssef Cherif told AFP.

Mechichi, like Saied, is not affiliated with any party. Saied has called the Cabinet reshuffle unconstitutional, but with no supreme court in the country to decide the matter, the political standoff has no end in sight.

The president has refused to confirm the new ministers for the interior, justice and health, among others, leaving the government hamstrung during a health and economic crisis.

The country has also been hit by a wave of protests in recent weeks against government corruption and police brutality. Police have made hundreds of arrests.

The IMF warned of an "unprecedented economic downturn" in the country in a report published on Friday. It recommended that the government limit energy subsidies and lower the wage bill after the country's already fragile economic situation was battered by the COVID-19 pandemic.

This will further complicate the country's borrowing power as it struggles to tackle the fallout of the biggest recession seen in Tunisia since its independence in 1956. Last year saw GDP shrink by 8.2% and unemployment rise to 17%.