Unrest spread across Tunisia after the government imposed an anti-virus lockdown amid economic hardship. Many Tunisians are frustrated by the lack of political reforms a decade after the Arab Spring. 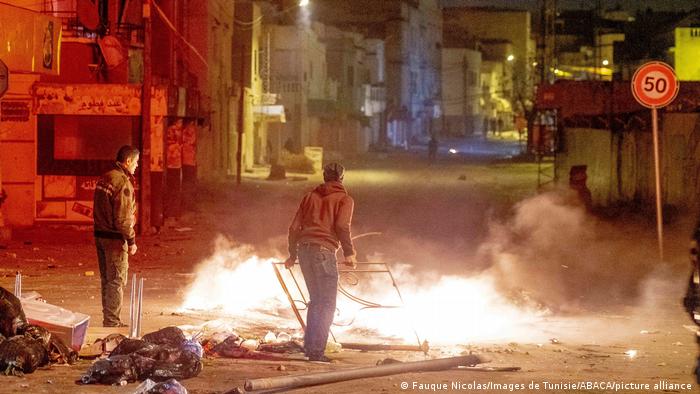 Demonstrators defied a curfew, imposed to stem the spread of coronavirus, and protested against economic hardship

Tunisian authorities have arrested more than 600 people after a third consecutive night of riots in several cities throughout the North African country, officials said on Monday.

Defense ministry spokesman Mohamed Zikri said the army has deployed troops in several areas including Bizerte in the north, Sousse in the east and Kasserine and Siliana in central Tunisia.

Riots erupted after the Tunisian government imposed a nationwide lockdown on Thursday — the same day as it marked the 10th anniversary of dictator Zine El Abidine Ben Ali's fall from power during the Arab Spring — to curb a surge in coronavirus infections.

The Tunisian defense ministry said that the situation was "calm" on Monday, according to the Associated Press.

Interior ministry spokesman Khaled Hayouni said a total of 632 people were arrested, including "groups of people between the ages of 15, 20 and 25 who burned tires and bins in order to block movements by the security forces." He said that some of those arrested threw stones at police and clashed with security forces.

"This has nothing to do with protest movements that are guaranteed by the law and the constitution," he said, adding:  "Protests take place in broad daylight normally... without any criminal acts involved."

Rights group Amnesty international released a statement on Monday, calling for the immediate release of all the arrested protesters.

"Nothing gives security forces permission to deploy unnecessary and excessive force including when they are responding to acts of sporadic violence," the group said.

The four-day lockdown ended on Sunday night, but it was not immediately clear if other restrictions would be imposed.

The unrest comes at a time many Tunisians are already increasingly dissatisfied with the lack  of change since the Arab Spring broke out at the end of 2010.

The country is suffering from a weakening economy, with one third of young people unemployed. GDP contracted by nine percent in 2019 and consumer prices have skyrocketed. Citizens are also frustrated over poor public services.

Tunisia has recorded over 177,000 coronavirus infections with over 5,600 deaths since the pandemic erupted last year.