Around 1,000 people have been arrested since unrest broke out earlier this month in Tunisia over economic hardship worsened by the coronavirus pandemic. Protesters have been demanding the release of those detained. 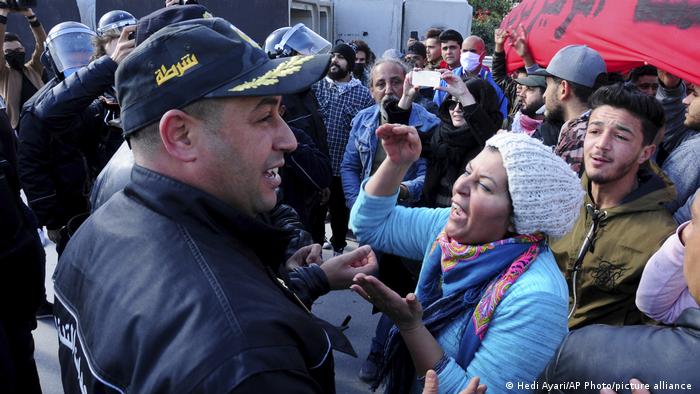 Hundreds of anti-government protesters took to the streets of the Tunisian capital on Saturday, demanding the release of recently detained demonstrators.

Saturday's unrest was sparked by perceived police repression after Tunisian security forces had detained around 1,000 people since riots broke out in parts of the country earlier this month, according to officials at the Interior Ministry.

The protesters marched from Tunis's central Human Rights Square to Habib Bourguiba Avenue, trying to get to the interior ministry, before security forces intervened. Anger spills over on the streets of Tunis

Others threw plastic water bottles at security forces, while many chanted "Down with police rule" and "Release the nation's sons (from detention)."

Mired in political and economic turmoil, exacerbated by the coronavirus pandemic, Tunisia has been at the center of a wave of civil unrest, a decade after Arab Spring demonstrators ousted the autocratic regime of Zine El Abidine Ben Ali.