Tunisia swears in third new government in less than a year

Prime Minister Hichem Mechichi and his ministers were sworn in after wining a marathon confidence vote, giving Tunisia its third new government since October. Political parties have complained of being sidelined. 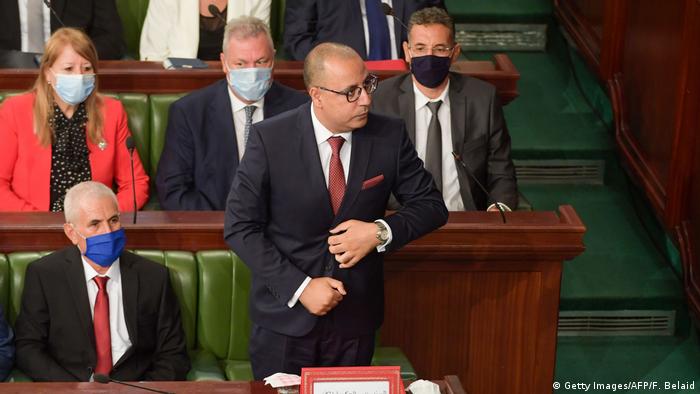 A new Tunisian government, headed by 46-year-old Prime Minister Hichem Mechichi, was sworn in before President Kais Saied at the Carthage Palace outside Tunis on Wednesday.

The ceremony followed a marathon 15-hour confidence vote on Tuesday in which Mechichi and his 28-member Cabinet were confirmed by a vote of 134-to-67 with no abstentions.

Prior to the vote, many of Tunisia's political parties had complained about the fact that the Cabinet consisted of academics, public servants and experts rather than professional politicians.

PM calls on Cabinet to ‘save the country'

The new prime minister called on his Cabinet to hit the ground running in an effort to "save the country." He said his government would successfully "move forward" as long as it was not the victim of political wrangling.

Mechichi's is the third government since parliamentary elections were held in October of last year, and the ninth since Tunisian protests ousted long-time President Zine El Abidine Ben Ali in 2011, sparking the Arab Spring.

Long viewed as the sole success story of the 2011 uprisings, Tunisia has been battered by economic hardship and civil unrest. The country's struggling tourism industry, for instance, suffered another severe blow due to the coronavirus pandemic. Overall, the Tunisian economy is expected to shrink by some 7% by the end of the fiscal year.

From ‘dignity' to ‘despair'

High unemployment, which officially stands at 18%, has caused many young Tunisians to flee the country in hopes of securing a better future. Others still have opted to join Islamic extremist groups.

Mechichi addressed the gravity of the current situation, saying: "Ten years after the revolution, the dream of a new Tunisia that assures liberty, dignity and equality has transformed into disillusion, disappointment and despair, which has pushed a large number of Tunisians to take boats of death," in a reference to the perilous journeys many have undertaken in an attempt to reach Europe.

Mechichi, an independent who served as interior minister in the outgoing government of Elyes Fakhfakh, will now replace his former boss in a handover ceremony this Thursday — making him the eighth democratically elected prime minister in the last decade.

The new prime minister promised his government would push for reforms, bolster public finances, crack down on tax evasion and invest in poor regions across the country.

Tunisians have voted on a new constitution that would grant the President expanded powers. Activists say the changes would put the country on a path to dictatorship - a decade after Tunisia emerged from the Arab Spring as the region's only democracy.